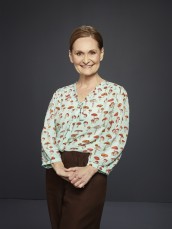 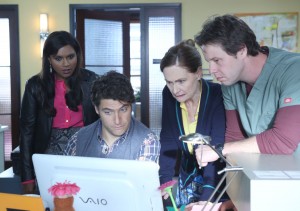 Prolific actress Beth Grant plays Beverly on Fox’s THE MINDY PROJECT, which has its season finale Tuesday, March 24. Grant’s character has gone from being homeless to trusted employee at the hospital where heroine Dr. Mindy Lahiri (played by series creator Mindy Kaling) works. In the show’s third season, Mindy is pregnant and about to have a baby – it’s probably a good thing Beverly is around when the doctor needs a hand.

The Alabama-born Grant has done many stage, TV and film projects, including DONNIE DARKO, RAIN MAN, FLATLINERS, THE GOLDEN GIRLS, SPEED, THE X-FILES, FLAGS OF OUR FATHERS, NO COUNTRY FOR OLD MEN and DEXTER. She’s also married to fellow actor Michael Chieffo (ARGO, MAD MEN) who is Grant’s date for a party thrown by Fox for the Television Critics Association at Pasadena’s Langham-Huntington Hotel. Like many longtime couples, Grant and Chieffo often complete each other sentences during an interview.

MICHAEL CHIEFFO: We are married.

CHIEFFO: We have a daughter.

GRANT: We have a daughter who’s at Juilliard, in her fourth year, and she’s playing Macbeth. And I mean not Lady Macbeth, but Macbeth. So we’re a bit obsessed with that right now.

ASSIGNMENT X: How are you feeling about Beverly’s evolution this season?

GRANT: Oh, I love her so much. I keep finding out all these cool things and these next ones that we’re shooting, just more and more. I mean, I’ve found out I’ve got a gun that I keep in the refrigerator, and it’s very exciting. We’ve all had such a good time this year. I think we’ve kind of got in the saddle, and we all really know each other now, love each other even more. I mean, we really know each other, so we’re more comfortable with each other now. Not that I wasn’t before, because I was very happy, but this year’s been a blast. I mean –

CHIEFFO: Well, it’s like what you said about our marriage, hon.

GRANT: That’s right, I told him – that’s exactly what I told him. I said, “Honey, I think the first twenty years are the hardest.” [laughs] And that was true. After twenty years –

GRANT: I’m a nervous person, [but] I’m not nervous now. I just am having a blast. It’s a great feeling.

CHIEFFO: There you go.

AX: Do you have a favorite episode or scene that you’ve gotten to do this season?

GRANT: I just did a funny thing with Mindy that I was thrilled out of my mind to do. I didn’t have any lines. I’ll just say that she feels sick in her stomach in a certain way and I help her out. I remove the vomit [laughs]. It was kind of gross, but it wasn’t gross, it was very funny – but you kind of had to be there.

AX: What other projects do you have going on right now?

GRANT: I just finished doing a movie with James Franco directing called TENN, and I play Tennessee Williams’ mother, and Vincent D’Onofrio is my husband. We had a blast and he was fabulous, and it was just great. We shot it very quickly – we shot it as a miniseries for Maker Television, but it may be released as a movie, too.

AX: And what would you most like people to know about THE MINDY PROJECT right now?

GRANT: I think the writing is better than ever. I think the writers know our strengths more and they know how to set Beverly up for reaction shots, which is thrilling to me, because I’m the kind of actress [who has] always got thoughts and opinions, and it’s fun for me to know that they’re catching them.