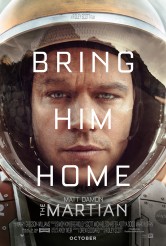 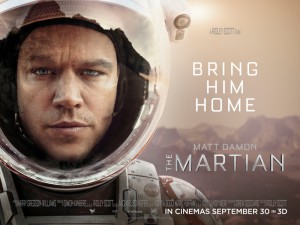 Director Ridley Scott is an acknowledged master of the visual arts, but the words “charming” and “intentionally funny” don’t usually spring to mind to describe his works, especially those set largely in outer space (ALIEN and PROMETHEUS are not generally cited as sources of warm fuzziness).

THE MARTIAN changes all that. Scripted delightfully by Drew Goddard from a novel by Andy Weir, the film is set in the near future, when behavior, technology and pop culture references are all still familiar, but NASA has managed to get a group of astronauts to Mars. When disaster strikes, the astronauts are forced to evacuate, and in the chaos, it appears that one of their number, botanist Mark Watley (Matt Damon), has been killed. Reluctantly, Mission Commander Lewis (Jessica Chastain) gives the order to head back to Earth.

Surprise. Watley wakes up a day later, having been wounded and knocked unconscious, with his life signs monitor destroyed. He has to figure out how to a) stay alive and b) communicate with NASA. NASA personnel figure out on their own that Watley has survived and in turn need to work out a communication system while they determine whether they can resupply him so he can live long enough to be rescued.

Unlike most films where the protagonist is marooned in a hostile environment, Mark engages in relatively little soul-searching. There are certainly plenty of moments of fear and frustration, along with long, suspenseful sequences, but there is something uncommonly buoyant in THE MARTIAN as well.

Damon’s Watley absolutely wants to live and he’s aware there are long odds against it, but when he devises something new that will extend his lifespan, he rejoices in his own ingenuity and in the remarkable nature of his situation – yes, he is trapped on Mars, but then, hey, he has made it to Mars. He has gotten things to grow where nothing has ever grown. He really is achieving things that no one else has ever done in similar conditions, and he finds something thrilling in this. It’s something that makes total character sense and it’s a lot easier to engage with pride and excitement than with existential gloom.

Back on Earth, things unfold much as common sense about real life tells us they would – there’s a contingent that wants to rescue Watley at all costs, a group that’s also excited about the scientific possibilities of mounting a rescue, another group that feels both the moral pressure and the time crunch of all of this, and then the political side worrying about how all this will play in the press and in the hearts and minds of the global populace.

Jeff Daniels does a bang-up job of playing the shrewd head of NASA, with Chiwetel Ejiofor, Sean Bean, Kristen Wiig and Benedict Wong all powerful – and sometimes powerfully funny – as other personnel involved in the effort. Jessica Chastain plays the mission commander with no-fuss, unquestionable authority.

From our hero’s exultation in the triumph of survival to the snap and wit of the dialogue (there’s a scene that is so meta with actor Bean that some people’s heads will spin) to the rock/pop classic-studded soundtrack, THE MARTIAN is that rarest of aliens – a movie that is a heartfelt celebration of what science can accomplish, wrapped in purest entertainment.