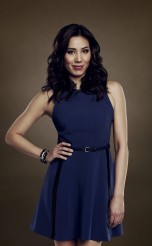 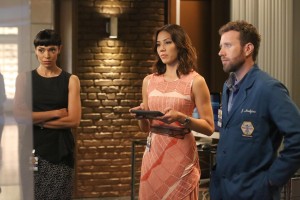 BONES is back for its eleventh season on Fox, Thursdays at 8 PM. Emily Deschanel is back as crime-solving forensic anthropologist Dr. Temperance Brennan, David Boreanaz is back as her FBI agent/husband/investigative partner Seeley Booth and writers/producers Jonathan Collier and Michael Peterson are taking on the show runner positions this year.

The mixture of mystery, science, romance and comedy just wouldn’t be the same, of course, without all of Brennan’s lab colleagues. Foremost among these is Michaela Conlin’s computer genius and artist character Angela Montenegro. At the end of Season 10, Angela, her scientist husband Dr. Jack Hodgins (TJ Thyne) and their young son were all set to move to Paris, but Angela realized that Jack’s heart was with his forensics job and told him she thought they should stay put.

Conlin, who has been with BONES since its very first episode, is at Fox’s party at West Hollywood’s Soho House for the Television Critics Association summer press tour. She takes a few minutes to talk about being on a series that’s into its seasonal double digits.

AX: Were you confident that BONES would come back for Season 11, or were you worried?

CONLIN: I didn’t know, honestly. Nobody was sure – we weren’t sure. We were preparing for both situations.

AX: Do you know if Angela and Hodgins were originally really going to go to Paris at the end of Season 10 and the writers changed it so they were staying when it was known the show was coming back? Did you do reshoots for that?

AX: Angela had said she wanted to move to Paris because it seemed very safe compared to where they were, but at the time the Season 10 finale aired, Paris had recently been the site of the Charlie Hebdo shootings and the shooting at the grocery story. Did you think it was at all odd that Angela saw Paris as this beacon of safety, given those events?

CONLIN: No, because I feel like it’s like saying you’re not going to go to New York after what happened. And I think Angela really always loved Paris and had a connection with it, so it made sense.

AX: BONES and SLEEPY HOLLOW are now back to back on Thursdays, and they’ve announced that there is going to be a crossover episode between the two. Are you involved in that?

CONLIN: I just heard about that. I don’t really know what that entails just yet. Sorry, I have no information [laughs].

AX: Do you have a favorite scene or episode from Season 10?

CONLIN: The 200th episode [directed by Boreanaz, with all the actors playing Fifties versions of their characters] was a real highlight. We all had a really great time doing it. That was pretty awesome.

AX: What happened with the film you were producing, SPARROWS DANCE?

AX: Are you working on another producing project?

CONLIN: No, not right now. I have a movie coming out that I shot for Relativity called THE DISAPPOINTMENTS ROOM, with Kate Beckinsale. That’s about it for right now.

AX: And what would you most like people to know about BONES Season 11?