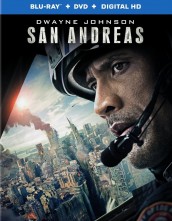 Reviewed this week: SAN ANDREAS, TOMORROWLAND, THE GALLOWS and more 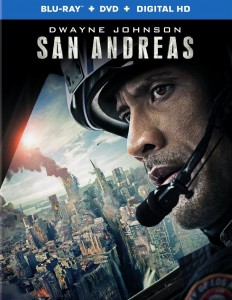 SAN ANDREAS – Oh the carnage. You gotta love the carnage. I’m a big fan of disaster flicks and the bigger the better. SAN ANDREAS is a huge disaster movie. The big one has long been predicted in movie lore as a big enough earthquake hits California to devastate the state on such a scale millions would perish. Some saying part of the state would fall off into the ocean forever lost. SAN ANDREAS pretty much lives up to this prediction given that not just are cracks in the Earth happening and highways and bridges falling but entire cities are getting laid to waste in horrific and amazing CG. I would actually say the CG used in this flick are some of the best of any disaster flick but it gets a bit of an edge given technology these days is far better than say DEEP IMPACT or ARMAGEDDON which were all in the late 90s or even DAY AFTER TOMORROW that was about a decade ago. So if you have been hoping for a new disaster flick with maximum amount of devastation this fits the bill in spades. It stars Dwayne “The Rock” Johnson and he does a serviceable job as the main hero showing some actual range as an actor while still kicking butt. It also has the lovely Alexandra Daddario and her two amazing talents that get the full range of getting wet, running away from things and stripping down to a tank top (but it was to help someone, really!). While the main point of interest is the mass destruction, there is a decent amount of actual plot about family, a local scientist predicting it all and some other stuff. Definitely worth checking out for action junkies. 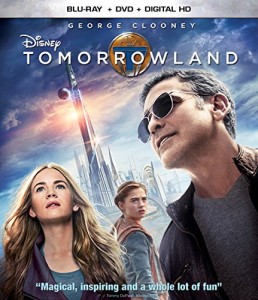 TOMORROWLAND – While TOMORROWLAND was considered one of the bombs of the summer because it didn’t garner nearly as much at the box office that was expected, it actually is a pretty entertaining movie and one that most children will enjoy because of the crazy gadgets and technological mumbo-jumbo that happens. That said, as many people have said about the film, it has a terrible way of making you feel bad about yourself. It spends lengthy amount of time telling you how bad you are and how bad you are treating the Earth and how you need to do better. Well, not you actually, unless you are a dreamer – which apparently is only artists, musicians, math geniuses, teachers, tree planters and wildlife gurus. If you are in the corporate world, you are either screwed or evil I guess (maybe both) according to TOMORROWLAND. While the film doesn’t come out and rightly say it, the absence of any lawyers, marketing managers, CEOs, Wall Street analysts, journalists and more seems definitely lean that way. Hey, that’s OK. It isn’t the first time someone has indicated I was part of an evil empire and probably won’t be the last. Seriously, the Disney film gets a bit preachy and that’s a problem but with lots of action and cool stuff happening it’s hard not to enjoy it nonetheless. 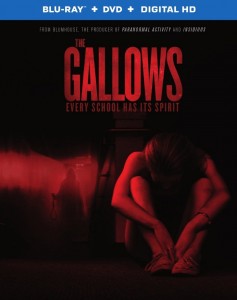 THE GALLOWS – Yet another found footage horror movie that involves enough more shaky cam moments than any of the shakiest of sticks. This time it involves high school kids and their really profound hatred of the drama department (not making this up). So they decide to break into the stage area after dark and lay waste to the set so they can’t perform. Only problem is that the place is naturally a bad place where an accident happened some 15 years ago involving the death of a student on stage. So as they begin to take out their hatred on drama nerds’ creation things start to go a bit crazy with doors opening, doors closing, strange noises and all the usual stuff. As the film progresses things get more violent and soon the bodies start hitting the floor as a ghost of an executioner begins to torment the high schoolers and soon nooses are getting strapped to necks in the usual can-barely-see-it fashion. The moral of the story is don’t f**k with the drama department, people. If you like the found footage genre you will probably enjoy it but if you have had enough there is nothing here that’s original enough for you to spend your time. 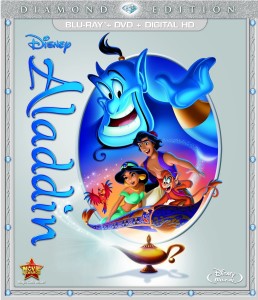 ALADDIN: DIAMOND EDITION – For the first time ever you can now listen and sing along to “A Whole New World” in high definition. Disney has been doing a great job over the years of issuing new versions of its classic catalog using the latest and greatest technologies and ALADDIN is no different featuring a new cut of the film from the original negatives. Of course, the tale is well known. A street boy uses a genie to convince a princess that he is a prince in order to win her affections. But an evil sorcerer threatens to not just break up the happy couple but has plans to rule the kingdom. The other cool thing is that you get new featurettes and extras on the Blu-ray combo pack as well as all the legacy special features from the original DVD release. You also get a digital copy to take along on tablets and other portable devices. As with other Diamond Editions to classic Disney flicks, this is a must have for fans. 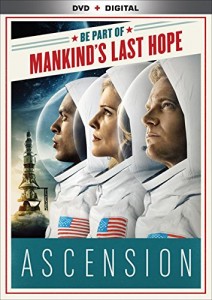 ASCENSION – This was the miniseries that SyFy Channel put out a while back about the last hope of mankind that was sent off into space in the early 1960s. The launch of the spaceship was a secret to the public and now after 50 years the ship reaches a point of no return in their journey to populate a new world. But there is a major twist in that someone on Earth is able to see what’s happening on board the ship at all times and that the ship is actually not floating in space but in some large government facility and it is part of some TRUMAN SHOW-type experiment to see what happens to people on what would be long journeys into the unknown. But when things start going wrong on board – including murders and other nefarious plots – those on the outside begin to wonder if it is time to end the experiment. The trouble is some on the inside may already know it is all a ruse and is using it has a way to cause chaos. It is an interesting miniseries and one that should maybe have been given a chance to become something more and if you enjoy science fiction is something to check out.