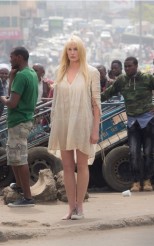 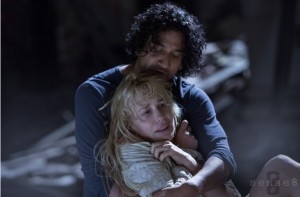 In Netflix’s series SENSE8, created by executive producers Andy and Lana Wachowski and J. Michael Straczynski, eight people from far-flung parts of the world, but born at the same moment, discover that they can all access each other’s thoughts and abilities. Further, members of this “cluster” discover that there are other, similar groups.

Naveen Andrews (of LOST) plays Jonas Maliki, a survivor of an older cluster who is trying to protect the younger group, despite the growing physical danger around him. Daryl Hannah (BLADE RUNNER, SPLASH, KILL BILL) portrays Angelica Turing, Jonas’ lover, who we see commit suicide but who seems to still be involved from beyond the grave.

Following a Q&A panel for SENSE8 held by Netflix for the Television Critics Association summer press tour with Straczynski, executive producer Grant Hill and fellow actors Jamie Clayton and Michael J. Smith, Hannah and Andrews both sit down for some further discussion of their unconventional show. SENSE8 has since been picked up for a second season, with Season 1 available in its entirety on Netflix.

AX: How did you become involved in SENSE8?

NAVEEN ANDREWS: I got the script and I had a meeting with Lana and Andy, and I wanted to talk about the script, I remember, and they went, “No, no, we need to talk to you about your life.” Which was a little unsettling [Hannah laughs], because it went on for almost two hours. And then after that I got the job.

DARYL HANNAH: For me, it was sort of a weird way. I didn’t have a manager or an agent at the time, and I had gotten a call from a relative that a friend of hers who was a casting director was looking for this musician that I know, because they were looking for a certain musician to play the part of Mr. Whispers [played in the series by Terrence Mann], and did I have a contact for him? And I said, “Well, yes, but I’m not sure if he’s working on movies right now.” Anyway, they said, “You might play this role androgynously, would you come in for it?” So I went to go meet on the Mr. Whispers character, and I didn’t read or anything, but I just went to meet [the Wachowskis, Straczynski and executive producer Grant Hill], and I ended up just talking to them for hours, and in that meeting, they said, “We have another part in mind for you.” They just told me the name was Angel, but they didn’t tell me anything about the story, and I hadn’t read anything of the script at that point. So that was it.

AX: So you both decided on the basis of those discussions that it would be fun to do?

AX: On the panel, people were referring to the Wachowskis as “the Ws.” Are they pretty much interchangeable on set?

HANNAH: No, not interchangeable at all. They’re very interconnected. They have a way of – they don’t need to speak, they’re like Sense8s, they don’t need to actually verbally communicate in order to completely understand what each other are thinking or doing, but they also do completely different things, yet as one. It’s hard to explain [laughs].

ANDREWS: Yeah. It sometimes literally can be like Lana running in with a note to me on how to do the next take, and then Andy will come running in and go, “Here’s my note for this.” And then I went, “But your sister said something completely different.” And he’ll go, “Did she? Then do that.” [laughs]

AX: You’ve both been involved in fairly high-profile genre stuff before. Are you finding the interest in SENSE8 similar to or different from the public or fannish interest in, say, LOST or SPLASH?

HANNAH: For me, this is a much younger crowd, obviously, than the people who are obsessed with KILL BILL or BLADE RUNNER or SPLASH. Actually, SPLASH is little, little kids, even still to this day, which is cool, but this is very specific – it feels to me like social media stuff, that it’s teenagers and twentysomethings that are really, really obsessed with it and very passionate about it. [to Andrews] How about you, what’s your take on it?

ANDREWS: Well, obviously with LOST, there was a wider range, in the sense that children were into the show, and this seems to be aimed at older people.

ANDREWS: Yeah, and heavy violence, et cetera. But there’s an element of – I’m loath to use the word “intelligence,” but it seems that this show is very complex, and the fact that it’s caught on – I guess one of the fears or concerns you have is, “Are people going to get it? Are they going be able to, or want to, grasp themes that are quite unsettling?

AX: Do you think part of the reason that people are able to grasp this more readily is, unlike when LOST was on and certainly when SPLASH and KILL BILL were released, there’s now a way of discussing things much more immediately with the Internet and in fact rewatching things a lot more immediately? Do you think that’s helpful?

AX: Do you watch film and television in that contemporary, immediate way, or do you still do it the more traditional way?

ANDREWS: I’m little bit more traditional. I don’t know why I’m being dragged kicking and screaming into the twenty-first century. I’m somewhere in 1969.

HANNAH: I do. I watch movies in the movie theatre or I watch them on Netflix and that’s basically it. I don’t have a TV. I watch at my own pace. Plus, I love having access to all those documentaries and all the different formats, not just movies or TV. I like having all the different [subjects] at my disposal.

AX: We know a lot about the main cluster by the end of Season 1, but we still don’t know too much about Angel and Jonas. Have you come up with back stories for you characters, have you been given back stories that we just haven’t seen yet?

ANDREWS: We made a gallant effort [Hannah laughs], if you like, to come up with back stories for ourselves, but we very rapidly discovered that when we were on set, the work took a different direction. It seemed to evolve by itself. We got a lot of information just by watching the Wachowskis at work on set.

HANNAH: And a lot of detective work [laughs].

AX: Are Jonas and Angel meant to be part of each other’s cluster?

AX: A very angry character was chastising one of the Sense8 group for being involved with a member of her own cluster with the line that love within a cluster is “the most narcissistic form of love.” Was this also a reference to the relationship between Angel and Jonas?

HANNAH: Perhaps we will learn about that.

ANDREWS: Perhaps we will, and as the Pope recently said, who am I to judge?

HANNAH: [laughs] Yeah, it’s never a good idea to have sex within your own cluster.

AX: SENSE8 films largely on location all over the world. Were there any places that either of you were particularly excited about getting to go with the production, like Iceland or India, or …?

HANNAH: Yeah, Iceland was very exciting. I’d been there before, but only really briefly, and so I was really excited to get to explore some of the hot springs and see a lot of the Icelandic ponies. They’re all different colors.

ANDREWS: Yeah, I was just shocked at the blond ponies. For me, strangely enough, Chicago. I’d never been to Chicago before, and that city was charged in a way that I felt in India or Italy. And I didn’t expect that at all.

AX: Jonas spends a lot of time lying still in restraints with monitoring equipment attached to him. Are those scenes difficult physically?

AX: Did you have any moments of physical discomfort in other scenes?

HANNAH: It barely appears, but when we were on the top of that mountain, it was really cold –

HANNAH: And we didn’t have shoes on –

ANDREWS: You didn’t have anything – just the nightgown.

HANNAH: Just the nightgown. But I’ve done a lot more brutal things for films. Actually, I have to say, our scene, the opening scene, even though I didn’t do anything physically – I was only sitting on a mattress – I was so physically wrought afterwards because of the emotional intensity of that scene that I was in maybe more pain than I’d been in for some of the more physical movies I’ve ever done, getting thrown through walls in both BLADE RUNNER and KILL BILL and all kinds of things. Literally, just every muscle in my body hurt from shivering all night and from the emotional intensity of it.

ANDREWS: Because the scene is pitched up there [gestures to indicate height] when it starts.

AX: There’s been some discussion of a BLADE RUNNER remake. How would you feel about that?

HANNAH: You know, I think if Ridley [Scott] is involved, the movie will be good. But I think it’s not a remake so much as a continuation or a prequel. That’s what I heard.

AX: What would you both most like people to know about SENSE8?

ANDREWS: It’s great and there’s something about it – and I don’t think this is an exaggeration – that if you want it to be, it can be life-changing.