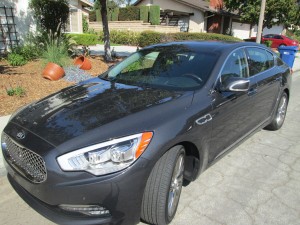 Spending a week with the 2015 KIA K900 luxury sedan is barely enough time to scratch the surface of what this amazing car has to offer. In fact, there are so many bells and whistles, I was still discovering many of them until the very last second of test driving this vehicle.

What KIA is trying to do is take their craftsmanship and innovation and apply it to a luxury vehicle and they’ve exceeded all expectations. 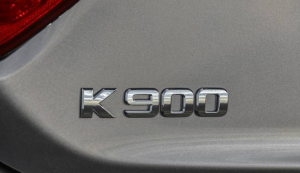 Las Vegas was the destination for this trip. It was also a holiday weekend, so traffic was heavier than expected, so one of the tests was how comfortable the drive would be and it passed that test with flying colors. The K900 is one comfortable car. It’s sleek, smooth and you feel like you’re gliding along roads and freeways while hardly feeling a jolt. In that respect, this is one of the smoothest vehicles I’ve tested to date. 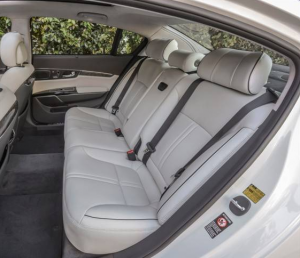 As for cool features, one of the best is the way the speedometer function appears in a three-dimensional way in front of your windshield. It’s very high-tech, but also very helpful. It allows you to keep your eyes on the road and know your speed without having to glance back at the dashboard. This function is also only visible to the driver – not the passenger or the people in the back seat. 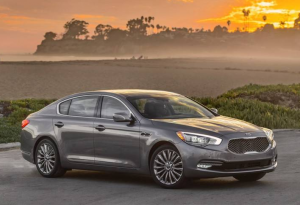 There’s a function where the vehicle tells you to align your steering wheel when you start the car – so you don’t pull out in an odd way. I also liked how the car warns you when your gas is low and suggests immediately where to find gas. That’s very helpful, especially if you wait to the last minute to gas up like I tend to do.

Warming and cooling seats in front and back seats is also a major plus.

The side mirrors fold in when you park, so they don’t get hit – a standard function on many cars. A sunscreen device pops up on the back windshield to protect and diffuse from blinding light coming from the back. 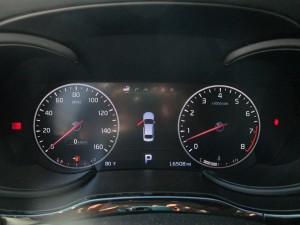 The radio and GPS in the center dash is laid out nicely – it’s better than most cars recent cars I’ve tested. I find car GPS to be a nuisance, overly complicated and somewhat unreliable (I always use my phone for that purpose), but the K900 seems to have eliminated some of those awkward kinks I despise. 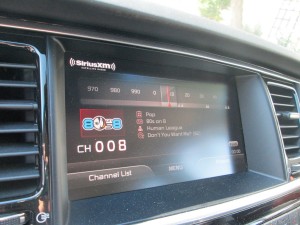 Gas mileage proved to be excellent. I didn’t need to gas up from Los Angeles to Vegas, until I reached Vegas. And finally, there’s a large trunk, for when you need to bring a ton of stuff for long trips.

As for the criticisms, the gear shift function is a bit odd. You have to push it forward to park as well as pushing it forward to reverse. It takes some getting used it and it’s a very awkward, counter-intuitive choice. The passenger in the back seats also have the ability to control the front air conditioner. Not a smart thing when you have little kid riding in the backseat who loves to be in control. 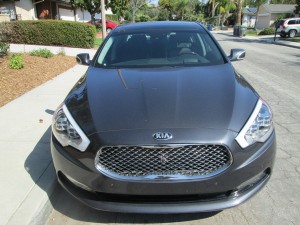 I’m also not a fan of analog clocks in cars – the digital numbers work just fine and are much easier to read, especially when driving.

As for the look of the K900 – the exterior is gorgeous. It looks sleek and chic, without coming off as if you’re bragging you have a fancy car. I also dig the design of the that front grill as well. 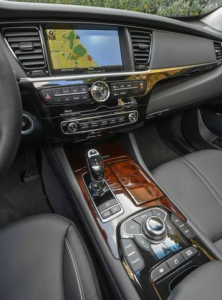 The K900 is a bit misleading too. It looks small on the outside, but inside, it’s roomy, spacious and extremely comfortable.

It being a holiday weekend, Vegas traffic was a pain, but driving around in the K900 made it a pleasant experience – especially listening to the Sirius radio stations to pass the time.

After returning from the Vegas trip, the remainder of the week included driving around town in city streets in my hometown. That too was a great experience. This is one of those rare instances of when the time came to return the car, I didn’t want to let it go. KIA has once again defied expectations and delivered another fantastic car experience. 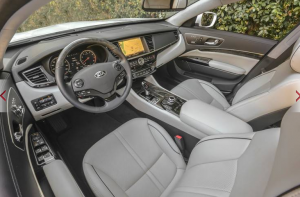