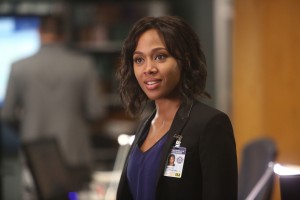 BONES, on Fox Thursday at 8 PM, is now in its eleventh season. Created by Hart Hanson, based on the life and works of forensic anthropologist/mystery novelist Kathy Reichs, BONES follows the investigative adventures of forensic anthropologist/mystery novelist Dr. Temperance Brennan (Emily Deschanel) and FBI special agent Seeley Booth (David Boreanaz). Over the years, our heroes have flirted, broken apart, come together, had a daughter, gotten married, gotten pregnant with a second child – and then quit their respective jobs at the end of Season 10.

Since BONES depends on Brennan and Booth – along with her colleagues at the Jeffersonian Lab and his FBI partner – solving murders each week, the characters had to get back to work. When Michael Peterson, who had been a staff writer on BONES for six-and-a-half years, and Jonathan Collier took over as show runners for Season 11, they had to figure out how to get their lead characters back to professional sleuthing.

Furthermore, when Fox executives thought that BONES ought to do a crossover with its new Thursday night companion, SLEEPY HOLLOW, Peterson and Collier also had to devise a method of getting their scientific procedural to meld with the supernatural series without changing the flavor of either. The crossover episodes air in a two-hour block Thursday, October 29.

ASSIGNMENT X: When did you begin working on BONES?

MICHAEL PETERSON: I came on in the middle of Season 4. This year will be seven-and-a-half. It’ll make me the longest [tenured BONES writer], outside of Hart and [erstwhile show runner] Stephen [Nathan]. 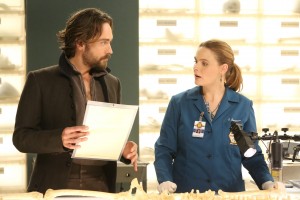 AX: Is this your first season as the show runner?

PETERSON: It is my first season, and it’s been fantastic so far. Being teamed with Jon Collier has been wonderful. He’s worked on so many different shows – THE SIMPSONS, KING OF THE HILL – he’s been doing this for a couple years. He prepped me a little for tonight, so I feel in very good hands working with him and it’s been wonderful. We’ve been scrambling to do a lot of work in a short time, but we’ve loved it so far.

AX: Are you still able to do as much actual writing as before you were show runner?

PETERSON: So far, yes. Jon’s writing the opener, I’m writing Two, and we’re working on everybody’s scripts and we watched under the hands of masters in Hart and Stephen, and they really were hands-on all the time, and we’ll probably run the show in much the same way.

AX: How involved are Hart Hanson and Stephen Nathan this season?

PETERSON: They are always a phone call away, but they’re very respectful and they want to give us some room to do whatever we want to do. So far, I think they’re liking a lot what they’re reading. They get all the production [information], they can weigh in on anything, Hart gave us an idea for a story [recently], and we’ll do that later in the second half of the season.

AX: Was there always a plan for how to get Brennan back to the Jeffersonian and Booth back to the FBI, or was that a challenge for the start of Season 11?

PETERSON: Oh, we were challenged, absolutely. We love these challenges. You sometimes on purpose write yourself into a corner, just to see how you can get out, and I love the solution that we’ve come up with.

AX: At the end of Season 10, married Jeffersonian lab staffers Angela, played by Michaela Conlin, and Hodgins, played by TJ Thyne, almost left for Paris. Then Angela realized Hodgins would be miserable without his work and decided they should stay. Was that scene written after you knew that you had the Season 11 pickup, or did you always plan for them to change their minds and stay?

PETERSON: We had planned that. You want to have fun – it looked like they were going to be the ones leaving, and then we switched it up at the last second.

AX: And how is the SLEEPY HOLLOW crossover going to work? There have been hints of ghosts and an afterlife on BONES, but no Headless Horsemen. 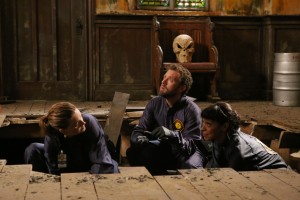 AX: So the BONES characters are going to step into and out of the more exotic SLEEPY HOLLOW universe without realizing what they’ve been in and out of?

PETERSON: Exactly. And part of the fun is that we get to do it on Halloween. So that leaves it open to a lot of things that are going on. We have costumes, we have superstitions that are going on, but we’re going to handle it in the BONES way. It’s worked for over two hundred episodes, it’ll work for this one.

AX: The serial killer Christopher Pelant, played by Andrew Leeds, was killed off, but he somehow sent Brennan a menacing video at the end of Season 10. Is that plot thread going to be explored further this season?

PETERSON: So far, no, but we always have a second half with the seasonal break. So we’ll see.

AX: Do you ever get grossed out by anything on BONES?

PETERSON: [laughs] Always. I always get grossed out. I used to love to pitch to Stephen and watch him delight in coming up with the grossest things that we could, so I’ve done episodes where we had to wade in septic tanks, where we had snakes coming out of people’s guts, and we’ll do some more of that.

AX: Do you think Season 11 will be the last?

PETERSON: I hope not. I want to do it forever. I’ve loved doing it for seven years, I think there’s a lot more story left to tell, and my plan always is to keep going. Eventually, the studio and the network will tell me when I have to stop, but I don’t ever want to stop.