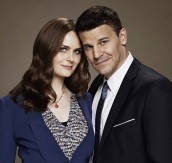 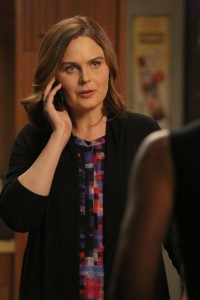 The BONES writing team had their work cut out for them at the start of Season 11. Never mind keeping it fresh, the end of Season 10 had Brennan (Emily Deschanel) leaving her job as head of the forensics team at the Jeffersonian and Booth (David Boreanaz) exiting his job as a leading FBI field agent so that they could live peacefully at home. Brennan has been concentrating on her writing, Booth is a freelance trainer at Quantico and both are happily parenting little daughter Christine (Sunnie Pelant) and their new baby son. However, since the series depends on them working together with the rest of the regulars solving murders, we know Brennan and Booth need to return to their vocations.

“The Loyalty in the Lie” comes up with a perfectly good reason for Brennan to re-enter the lab: when badly burned remains are found inside a charred van, tests indicate that the bones belong to Booth. Worse, Booth’s gun was found with the body.

Brennan insists on examining the remains herself. Her thoroughness – and complete knowledge of Booth’s history – allow her to find a bit of bone that Booth had lost during a shootout years back. After Brennan chews out temporary replacement Arastoo Vaziri (Pej Vahdat) for not spotting this and scaring her by insisting the remains had to be Booth’s – and fair enough on Brennan’s part – the lab gets down to the business of determining the identity of the victim. It turns out to be Booth’s brother Jared (played in five episodes over the seasons by Brendan Fehr).

Meanwhile, Booth is being investigated in absentia by Special Agent Miller (Kim Raver) from the FBI’s version of Internal Affairs. Booth’s former partner Aubrey (John Boyd) and District Attorney Caroline Julien (Patricia Belcher) are both affronted by Miller’s assumption that Booth is dirty. It appears that Jared had been mixed up in risky business before his death – lots of income with no visible job or tax statements and a connection to a crime lord.

Aubrey puts together a team, largely consisting of Booth’s training graduates, that find a massacre in the drug lord’s house – and a lot of blood that matches Booth, though Booth himself isn’t there.

Booth is actually in a basement, tending to a nasty wound in his abdomen, and hanging out with three tough guys and a lot of money.

There’s an accelerated belief that Booth may be alive, albeit wounded, among the other characters. We know that Brennan, of course, is going to insist that Booth is alive absent conclusive proof to the contrary. The other characters seem to agree with her rather quickly in the face of strong suggestions that Booth is dead. On the one hand, this seems a little unlikely. On the other hand, since the writers are well aware that the viewers know damn well that Booth is alive, there’s no point in drawing out fake suspense.

A more likely question is, what kind of mess surrounds Booth and how did he get into it? Odds are good that he was trying to rescue Jared, but why this entails being entangled with three bad guys is an intriguing enough puzzle for us to want to know the solution. The biggest mystery of all is how Booth is going to get back to full-time crime fighting; next to that, we also wonder how Brennan will react to Booth lying to her about something significant again, no matter how worthy the cause.

In the B storyline, Arastoo is trying to propose marriage to his lover and boss Cam (Tamara Taylor), who accidentally sees the ring before he’s able to ask. He knows that she knows he wants to ask, and she knows that he knows, and Hodgins (TJ Thyne) knows that something is happening on this front, but not exactly what or why, so we’re also left curious as to whether or not Cam will accept (please say yes, Cam, it would be a shame to lose the terrific Vahdat from the recurring cast).

We get Brennan at both her most emotional and her most logical and prickly, which is always fun, and the procedural elements are all strong.

“The Loyalty in the Lie” ends with “To Be Continued,” so we end the hour with nothing resolved except for the issue of whether BONES is back and functioning as it always has. To this, the answer is a definite “yes.”