BONES review The Doom in the Boom 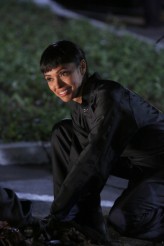 Good, surprising in both the crime and the arcs 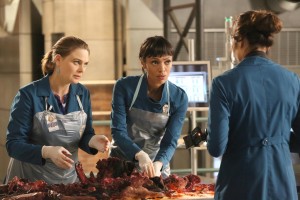 Emily Deschanel, Tamara Taylor and Michaela Conlin in "The Doom in the Boom" on BONES | © 2016 Jennifer Clasen/FOX

The BONES Season 11 episode “The Doom in the Boom” works on multiple levels. It’s got a good, tricky whodunit and it provides a good fakeout in terms of which character should give us cause for concern.

When two skateboarding teens phone the police to report their discovery of a maggot-ridden corpse, their call is intercepted by a freelance crime videographer (think NIGHTCRAWLER). Although the crime is in D.C. proper, for once Brennan (Emily Deschanel) and Booth (David Boreanaz) are not on the scene – they’re having supper with Angela (Michaela Conlin), who is still bemoaning the fact that Hodgins (TJ Thyne) doesn’t want more kids yet.

Hodgins isn’t at supper, because he is at the scene, along with Aubrey (John Boyd) and Cam (Tamara Taylor). When Hodgins finds a ringing cell phone on the body, Aubrey realizes what’s going on and uses his own body to shield Hodgins from the ensuing blast. Upshot: four D.C. police officers killed and Aubrey hospitalized, unconscious.

Hodgins is guilt-stricken that Aubrey may be dying for him. Back at the lab, Cam’s former fiancé Arastoo Vaziri (Pej Vahdat) shows up. He’s concerned for Cam, who isn’t sure how to react to his presence. Brennan, however, gladly takes Arastoo up on his offer of help. A serial number on knee replacement hardware on the original body identifies the deceased as another police officer – it seems that the murderer is a serial cop killer.

After the usual false starts, the decomposing corpse of a warehouse security guard who wanted to be a cop (he was a prime suspect before he turned out to be dead) leads to the real killers – the two teens who “found” the body with the planted explosives. One had a hatred of authority due to abuse by his now-deceased police officer father, and the other was a born follower. When the guard interrupted their skateboarding on private property, they clobbered him with a board, then shot the guard with his own gun and got ideas about going on a murder spree.

Aubrey recovers, Hodgins tells Angela he’s ready for more kids after all – his near-death experience was a wake-up call – and Arastoo tells Cam he’s ready to work at a hot dog stand if he can be near her. Then, before Cam can respond, Hodgins collapses. He has had a delayed spinal reaction to the blast and if he lives, he’ll be paralyzed.

Sometimes BONES is guilty of either making it clear too early who the culprit is, or else being haphazard in the set-up. The opening scene, with the boys looking at the corpse and being surprised by the videographer, is a smart bit of misdirection.

Then there are the larger plot arc elements. Another thing BONES handles with varying levels of success is handing episodes over to the supporting characters, which is somewhat the case here. Brennan and Booth have a scene where she berates him for wanting to make himself a human target in order to draw out the then-unknown killers, with both of them on point in terms of their personas, outlooks and relationship to one another. However, Aubrey gets the big scene relating to this – before Booth can put himself on the line, Aubrey goes on live TV to call out the murderers, putting himself in jeopardy, much to Booth’s displeasure.

Giving one of the regulars – Hodgins – an evidently ongoing disability certainly opens up lots of fertile new territory in terms of both how the character will handle it and how the workplace will handle him. Vahdat and his character Arastoo are both so appealing that it’s to be hoped Cam takes him back.

“The Doom in the Boom” puts bounce in the BONES.