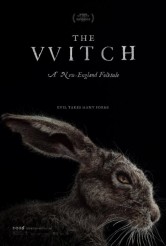 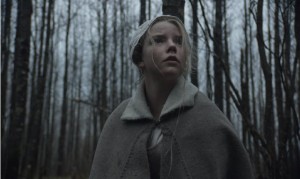 Set in the 16th-century British colonies in North America, or more precisely, in the vicinity of the colonies, THE WITCH pulls us in with a straight-faced authority. Director/writer Robert Eggers, basing what the ads call his “folk tale” on writings of the period, creates a marvelous sense of atmosphere and imbues it with genuine dread.

William (Ralph Ineson) is so strict in his religious faith that even his fellow Puritans can’t bear him. Consequently, William, his loyal wife Katherine (Kate Dickie) and their five young children are exiled from the safety of the village.

William appears to be perfectly content with building a small, isolated farm at the edge of the forest. Katherine and eldest daughter Thomasin (Anya Taylor-Joy) and son Caleb (Harvey Scrimshaw) are given a variety of chores, while little twins Mercy (Ellie Grainger) and Jonas (Lucas Dawson) make up songs and baby Samuel delights everyone.

Then Samuel disappears and cracks start forming in the family’s solidarity. Katherine, distraught at the loss of her youngest, is increasingly critical of Thomasin, while Caleb seeks to solve the family’s problems.

A relatively early and very disturbing sequence shows us which side of the woods we’re on, so to speak – yes, there are supernatural doings afoot – but it’s handled in a way that elevates the suspense. Eggers makes his story work on levels that are psychological, metaphoric and realistic all at once. He weaves together elements that feel authentic to folklore of the period with clear-eyed observations about dynamics between parents, parents and children and between siblings. When Thomasin loses patience at the teasing and babbling from the twins, it’s easy to see how this understandable adolescent exasperation can be seen as something worse when superstition is involved.

Visually, THE WITCH also honors its themes. The Pilgrims eschewed bright colors, and we see no blue (the sky is forever overcast), no green (the forest trees are so dark as to be nearly black), no yellow except for Thomasin’s hair and red only when there’s blood. The dialogue sounds correct, and yet hews to how people actually speak, with nary a campy syllable uttered. The acting is terrific, with Taylor-Joy creating an empathetic center, with excellent support from Scrimshaw and adult GAME OF THRONES veterans Ineson and Dickie.

THE WITCH is a work that feels all of a piece, both in its day-to-day observation and the supernatural horror and the people beset by it. Perhaps Eggers’ crowning achievement here, though, is that he gives us a sense of the routine of this family’s life without ever making us restless, even before things grow exceedingly strange. This is one of those movies that draws you into its world and holds you inside it.