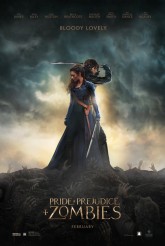 A reasonably entertaining mash-up of romance and revenants 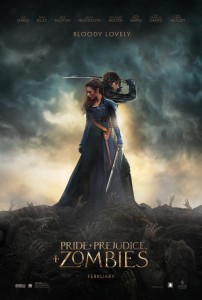 It is a truth, universally acknowledged, that a zombie movie in possession of a PG-13 rating must be in want and perhaps need of guts, both metaphorical and literal. True, there are some peculiar edits in PRIDE AND PREJUDICE AND ZOMBIES, director/writer Burr Steers’ film version of Seth Grahame-Smith’s undead-enhanced rewrite of Jane Austen’s original 1813 novel of love and manners. However, given how far the two genres (zombie war and early nineteenth-century English romance) have to travel to come together into a whole that works relatively well, some squeamishness on the part of the filmmakers isn’t the worst thing that could have happened.

Just as in the original PRIDE AND PREJUDICE, we’re in nineteenth-century England, but in the alteration, the British army has been busy fighting zombies (as is explained to us in a fun, animated title sequence). Life goes on in the gentrified countryside, though Mr. Bennet (Charles Dance) has made sure that his five daughters have been educated – in China, no less – in martial arts in order to defend themselves against any undead attackers.

This seems a sensible concern, as the zombies here can still think and talk and, in some cases, conceal their undead condition for awhile altogether. Col. Darcy (Sam Riley) is an expert and perhaps over-eager killer of zombies. When Darcy meets the Bennets, he almost at once gains the ire of Elizabeth Bennet (Lily James), who is wounded by the man’s snobbishness. Darcy’s friend Mr. Bingley (Douglas Booth) falls head over heels at first sight for Elizabeth’s sister Jane (Bella Heathcote), but Darcy is suspicious of the match. Then George Wickham (Jack Huston), an old acquaintance of Darcy’s, meets Elizabeth, presenting an intriguing alternative. Meanwhile, Pastor Collins (Matt Smith), a cousin of the Bennets, comes to visit, hoping to marry one of the Bennet daughters. Mrs. Bennet (Sally Phillips) is in favor of this; Elizabeth is not.

Since the original PRIDE AND PREJUDICE is one of the prototypes for romantic comedy/dramas, the plot should sound familiar – except that the zombie threat keeps increasing, so that there are big action sequences here, there and everywhere. There are plenty of versions of the Elizabeth/Mr. Darcy confrontation scene out there, but the one in ZOMBIES is something special – the dialogue is largely unchanged, but actual physical dueling handily illustrates the emotional subtext in a way that more faithful adaptations cannot.

It’s sometimes a bit hard to follow all of the rules of this universe, both in terms of how society hasn’t totally collapsed yet and in terms of how women warriors are seen in society. Elizabeth and her sisters’ martial skills are clearly necessary and often admired, yet simultaneously condemned. This contradiction is the kind of thing Austen’s writing would have addressed, but the movie doesn’t seem to know how to explore in its hurry to make sure all the major points are covered.

There’s a tonal imbalance here, as director Steers sometimes plays the drama totally straight, the non-violent comedic moments in MASTERPIECE THEATRE manner and then goes for some tongue-in-cheek humor when addressing things like knives concealed in garters or a woman’s anger at a man expressed via a kick to the groin.

For someone who hasn’t read the book (that would be this reviewer) there’s also what seems to be a hole in the story logic late in the day concerning a military action that seems very wrongheaded. It may be that this is better explained in the source material, or it may be that it was never explained – either way, the lack of logic on this key point feels like a major omission.

Still, PRIDE AND PREJUDICE AND ZOMBIES is pretty enjoyable. It knows it’s a mash-up but doesn’t spend a lot of time underscoring this; it just finds its own style and gets on with things.

James is an engaging heroine in both her romantic and action aspects, which flow together easily, and Smith, late of DOCTOR WHO, has expert period comedy chops. Lena Headey shows up, giving instant authority to her legendary warrior character.

This is (should it need saying) neither the definitive screen adaptation of PRIDE AND PREJUDICE not the last word in zombie epics. Even so, PRIDE AND PREJUDICE AND ZOMBIES is in possession of relative entertainment value and some originality as well.