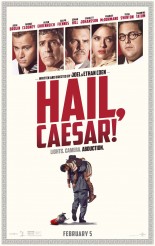 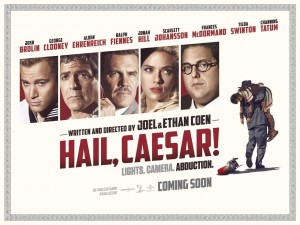 The writing/directing team of the Coen Brothers, Ethan & Joel, isn’t known for being especially sentimental. However, just in time for Valentine’s Day, the Coens are bringing forth HAIL, CAESAR! their own idiosyncratic love letter to making movies that does everything but belt out “There’s No Business Like Show Business.” (There are several musical numbers, just not that one.) It turns out to be mostly charming and funny, even if it digresses more than is strictly good for it – and yes, digression is a Coen Brothers hallmark, but here it makes some things feel like they’re taking longer than they should.

In order to be able to set the right sort of winking-with-a-straight-face mood, HAIL, CAESAR! takes place in Fifties-era Hollywood. Michael Gambon, our unseen narrator doing his best Alfred Hitchcock, introduces us to Eddie Mannix (Josh Brolin), top fixer for Capitol Pictures. Among Eddie’s problems today: a singing cowboy (Alden Ehrenreich) cast at the studio boss’ insistence in a drawing-room drama, a pregnant and unmarried swimming musical star (Scarlett Johansson), the determination of gossip columnists to get to the bottom of an old rumor, and the unexplained absence from set of Baird Whitlock (George Clooney), leading man of the studio’s in-production Biblical epic, HAIL, CAESAR!  Eddie has other issues as well. Lockheed would like his services, promising a better paycheck, more regular work hours and more overall certainty.

We know, though for a long while Eddie doesn’t, that Baird has been kidnapped (while in his Roman centurion costume, no less). Some of the other plots work their way into this one and some don’t. Obviously, not everything here can or should be tied together, but there are so many plot strands that get left dangling that attention fatigue threatens to set in. Unlike the filmmakers, we’re new to all this – there’s only so much we can easily follow, and when some evidently important moments lead to dead ends and other resolutions come from just about nowhere, it threatens to dampen our enjoyment.

Overall, though, there’s a lot of delight to be found here. Most of the invented film clips we see are pitch-perfect, and the off-screen scenes are largely charming as well. An early scene of Eddie presiding over a meeting of various clergy, including a rabbi, to make sure that the HAIL, CAESAR! script won’t offend anyone is typical of the tone here – there’s wit, observation, irony and yet affection for everyone in the room.

There is a lot of fun to be had – and this movie has it – with Johansson in an Esther Williams/Busby Berkeley-esque water ballet and Channing Tatum as a Gene Kelly song-and-dance man, dancing and singing in a big number that starts out as the kind fare we’d expect of the era and then becoming something that playfully brings out subtext.

Brolin plays Eddie with such assurance that he feels instantly familiar and solid to us, an archetype made flesh (with flaws, of course). Clooney demonstrates again, star power aside, why he’s the Coens’ go-to guy for well-intentioned if vain fellows gamely wading out of their depth. Ehrenreich is very good as the ever-polite and ever-alert albeit occasionally baffled cowboy movie actor making a transition.

It’s Ian Blackman, though, who gets the supporting role that defines HAIL, CAESAR! through his antagonism. Blackman plays Lockheed representative Cuddahy who, in his pitch to woo Eddie to the business world, keeps disparaging movies and what they stand for. This is so thorough and pointed that it sounds like the Coens may have been taking notes at some long-ago family get-together, when someone went on and on and on about what a ridiculous idea it is to tell stories for a living. Maybe this time it’s not personal, but it sure sounds that way. Either way, HAIL, CAESAR! is a mostly lively, occasionally wandering, usually entertaining and uncommonly heartfelt rebuttal to such complaints.