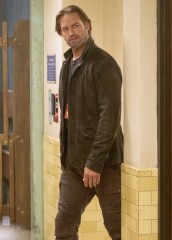 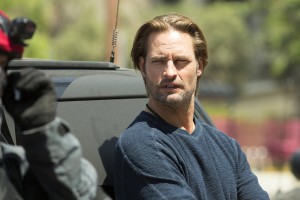 In USA Network’s COLONY, Thursdays at 10 PM, Earth has been conquered by a race of extraterrestrials. Evidently, no humans have seen any of the aliens, only their massive ships that float menacingly above what’s left of the cities. Some humans collaborate with the aliens; others organize a secret resistance.

Josh Holloway’s character Will Bowman is one of the collaborators. Will and his family live in a section of Los Angeles walled off from the devastation beyond the city’s borders. He resents the aliens, especially as they’ve kidnapped his eldest son, but when an official, Proxy Snyder (played by Peter Jacobson), says that cooperation is the best way to secure the boy’s release, Will reluctantly agrees. Will is unaware that his wife Katie (Sarah Wayne Callies, late of THE WALKING DEAD), mother of the missing boy as well as their two younger children, is one of the resistance leaders.

JOSH HOLLOWAY: We’re good friends and he’s approached me a few times about things. We’ve been talking, open dialogue, looking for an opportunity to work together and he called me up when I was in the middle of looking, and said [Vito Corleone voice], “I have something you can’t refuse.” “Really? Do tell.” So he explained it to me and told me who the [pilot] director was going to be, sent me the script that night, I read the script, I watched Juan Campanella’s THE SECRET IN THEIR EYES – did you see that? He won an Academy Award for it, he’s a fantastic director and I was all in. I trust Carlton, of course, because I’ve worked with him, I know what kind of writing style he has, and one of his sixth senses is finding amazing writers. So I knew Ryan was amazing as well.

AX: What appeals to you more, the overall story, or your particular character, or both together?

HOLLOWAY: The overall story. I am a sucker for a big story, and complex characters. I don’t like something just about one person, I like it to be about every character you see in that thing. So that is very appealing to me, that I was working with a strong actress like Sarah, who I knew they would utilize, so it’s not just going to be me, it’s going to be a complex story, and it is. Oh, my gosh. The pilot is a patient set-up – now it’s crazy ramped-up.

AX: Is this the first time you’ve played someone who is a dad?

AX: You are a dad in real life, but how is playing a dad?

HOLLOWAY: Awesome. That is another reason I took it, because it’s timely for me. I’ve been with my wife seventeen years, we have two children, I understand long-term relationship, marriage and children, and the stakes involved in that. So for me, it was a no-brainer. I love it.

AX: Your character and your wife are not in complete agreement as to how to handle things …

HOLLOWAY: You mean my real wife, or no, because it’s the same way [laughs].

AX: Your character’s wife, not your real one.

HOLLOWAY: It’s that way in a marriage. You may have the same core idea and totally different ways of going about it, and that is kind of where we are. We want the same thing – we have a different way of going about it. Okay, mine is a bit forced, because I have no real choice. But you always have a choice – I could let them [Will’s eldest son and the other hostages taken by the aliens] all die, I guess. And then Sarah’s character made a choice, a strong choice in that way, which I think is amazing. I love that. I love the contrast.

AX: Were you familiar with Peter Jacobson before working with him here?

HOLLOWAY: I was. And I love him. He is fantastic. He is one of my favorite villain/non-villains so far. I love him. He’s brilliant.

AX: What would you most like people to know about COLONY?

HOLLOWAY: Story, story, story. If you like story, you’ll love this.

This interview was conducted at an event held by USA Network for the Television Critics Association press tour.