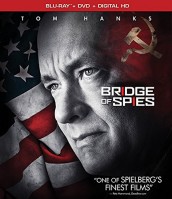 Also reviewed: OUR BRAND IS CRISIS, THE LAST WITCH HUNTER, MARTYRS and more

Yeah, so a lot of stuff this week. Beginning of the month is usually a packed one but this week is crazy (and time consuming on my part). So check out what’s available on video this week. 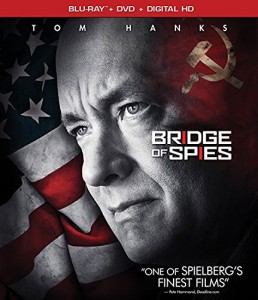 BRIDGE OF SPIES – During the height of the Cold War just before the Soviets erected the wall in East Berlin, a Russian spy is taken captive and put on trial for crimes against the U.S. An insurance attorney (Tom Hanks) is brought in to give him a proper defense but given the time it was anything but fair and he is sentenced to life in prison. At the same time, American spy planes are flying over Russia for intelligence when one is shot down and the pilot captured. Seeing an opportunity to swap prisoners, Hanks’ character is sent to East Berlin to negotiate the deal, however, things aren’t easy given the rising tensions and rising walls in the city. BRIDGE OF SPIES is an excellent political thriller and harkens back to a time when tensions were so high between America and Russia that virtually anything was considered close to an act of war.

Steven Spielberg returns to what makes him a great director in films that are based on history (or at least close to it) and Hanks does is usual good job as the lawyer that fights the good fight for all of the parties involved – even the Russian spy he grows to have a personal relationship with. Some cool behind-the-scenes featurettes are included on the Blu-ray version including a look at how they re-created the U-2 spy plane and the Berlin Wall as well as a look at the true story of those in this film. The combo title includes a DVD copy, Blu-ray and digital copy to take on portable devices. 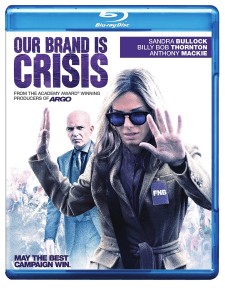 OUR BRAND IS CRISIS – An interesting take on politics that are not involved in the United States. Sandra Bullock plays Jane a political strategist that has been out of action for a number of years after failing in four straight campaigns. She gets hired to help a right-wind politico in Bolivia that is trailing by more than 25 points in the polls. The problem is that the guy who is winning hires his own American strategist that has a history with Jane, which makes anything she does that much harder. The issue with OUR BRAND IS CRISIS is that it tries to re-enact the drama of a real election on film, something that is a lot harder to do than just put it to paper. So the story gets a bit watered down by everything other than the craziness of what the two strategists try to do including an ill-fitting romance. Plus, this doesn’t really do a lot to help viewers believe that politicians aren’t slimy characters that do nothing but cover their own ass and never live up to their promises. 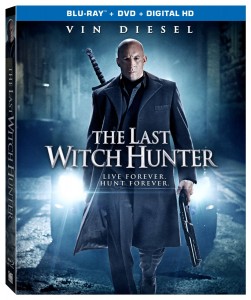 THE LAST WITCH HUNTER – This action fantasy flick got lambasted by critics and scored like a 16% on Rotten Tomatoes – which is really bad. However, viewers give it about a 50% and I guess I am more in the corner of my fellow viewers because I enjoyed THE LAST WITCH HUNTER. It has a lot of great production values, action sequences, good ideas and even some decent CG. But I get it why critics may not have like it as there are times where the films plods along and goes a bit longer than it probably should. Vin Diesel is decent as an immortal witch hunter that manages a fragile truce between man and those with magic. When an ancient evil returns, he must fight to stop it before letting a plague loose on the city that will kill millions.

Yeah, it isn’t very inventive or original but not a lot of these types of movies are these days. But given some of the gnarly action and cool creatures and magic that is given here, it makes it worth checking out for sure. In addition to the digital copy, DVD and Blu-ray, there is some cool stuff in the extras as well with animated short films that bridges the gap in the mythology, a handful of featurettes, audio commentary and deleted scenes. 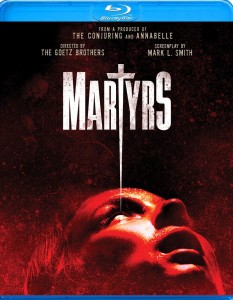 MARTYRS – This is the Americanized version of the French horror flick that was a huge hit back in 2008 because it brought something completely different to the genre. Of course, Hollywood had to make a version on its own instead of leaving it in its already lovely form. Luckily, the American version isn’t all that bad and does maybe a better job of explaining what’s happening than the original, however, it lacks the punch to the gut and shock from the former. Lucie (PRETTY LITTLE LIARS’ Troian Bellisario) escapes from a brutal warehouse where she was tortured and kept prisoner. She gets put in an orphanage and meets Anna, a girl she forms a lifelong bond with, and someone that she relies on to tell her the horrors she has felt.

Flash forward 10 years later and Lucie is out for revenge tracking down the men that tortured her as a child. She once again calls on Anna to help and she gets dragged into the same terrible circumstances that befell Lucie so many years ago. But the goal of these terrible people is something that may be even more frightening. If you are going to make something that was already that damn good, it is best not to re-invent the wheel and that’s what they did here with better production values. If you didn’t see the original, you won’t be disappointed, if you did, this is still worth re-visiting such an interesting horror flick. 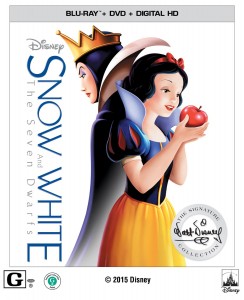 SNOW WHITE AND THE SEVEN DWARVES – Disney has made a good effort to bring its classic kid’s movies to high definition with its Diamond Edition versions of the movies. But now it is taking it one step further with the release of its first Walt Disney Signature Collection titles. What is it? These are titles that Disney says embodies the legacy of Walt Disney but also with new special features and offering these titles up for the first in a digital format.

Here, the classic gets another new cut of the film in stunning high definition but also some new extras including Walt Disney talking about the character of Snow White for the first time, modern day Disney artists discussing the design of Snow White, a new alternate sequence where she meets the prince and a featurette on the impact the character had on pop culture, art and other Disney characters. Cool stuff here for those that have seen the film or own it already or those looking to own it for the first time. 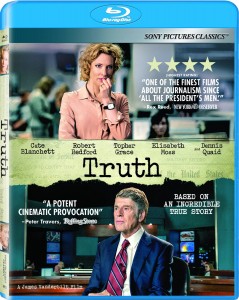 TRUTH – In this drama-thriller, Cate Blanchett plays CBS producer Mary Mapes who believes she has one of the biggest stories – if not the biggest – of the 2004 presidential election in that she has sources and documents proving how sitting president George W. Bush was able to avoid going to Vietnam during his tenure in the National Guard. Dan Rather (Robert Redford) goes with the story but when critics come out against the truth in the reporting, their sources begin to back off and the documents produce may not be as accurate as they once thought.

At its heart, TRUTH is a story about journalism but it is also how given enough pressure, the truth can actually be circumvented by vicious attacks and political pundits doing what they do best. Blanchett is pretty damn awesome in this movie and Redford does an excellence job as the cagy journalist looking for one last big story before retirement. His quips about journalism as a whole and why he got into the business are pretty telling for a day when everything is sound bites and viral videos. 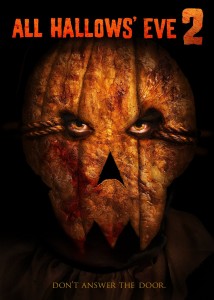 ALL HALLOWS EVE 2 – The horror anthology is a tried and true segment of the genre that has lasted or decades. From the classics like THE VAULT OF HORROR, NIGHTMARES, THE TWILIGHT ZONE, TALES FROM THE DARKSIDE and CREEPSHOW to the modern day V/H/S and TRICK R’ TREAT anthology horror has always been a good way to tell short, creepy tales covering a variety of subjects. That said, not all of these stories from each movie or television show are gold. In fact, usually there’s a rotten apple or two in just about every one of them. ALL HALLOWS EVE 2 follows a similar fate and structure as other anthologies with one main story about someone watching a movie but all the while getting stalked by a crazed killer. It follows a number of short horror stories some which are good, some which fall into the rotten apple category.

The good news about all anthologies is that if you don’t like something, usually it won’t be long until something else pops up. You can either fast forward through what’s bad or just begrudgingly watch. It is about 40/60 with ALL HALLOWS EVE 2, so you definitely take the good with the more of the bad. Nothing on the special features so this is purely about what is presented which as I said leaves a bit to be desired. 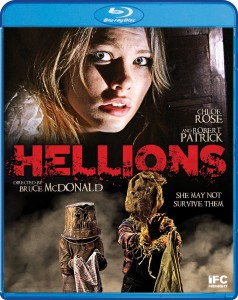 HELLIONS – Interesting enough, we have two Halloween centric films this week in the month of February. Obviously ALL HALLOWS EVE 2 takes place during the holiday but so does HELLIONS, an IFC/Scream Factory combination film about a bunch of creepy little kids that come to haunt and kill a young pregnant teenager during a blood moon on Halloween. HELLIONS follows a storyline that whenever there is a blood moon on Halloween, demons from the underworld come to collect the innocent baby from an unwilling mother.

It happened once before to the sheriff (played by Robert Patrick) and his son. The problem is that the mother, naturally, has to perish in order for the Hellions to take the baby. Nothing really new here regarding demons and hell and abducting babies but there are some cool visuals and the soundtrack is actually one of the best things about the movie as it is a mix of NIGHTMARE ON ELM STREET and modern instruments. Worth checking out for sure despite you’ve seen similar themes before. 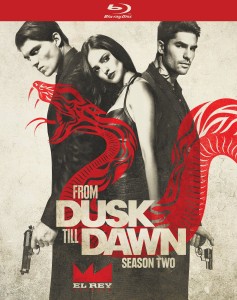 FROM DUSK TILL DAWN: THE SERIES – THE COMPLETE SEASON TWO – The first season of FROM DUSK TILL DAWN: THE SERIES as shown on the El Ray network was a mixture of blending new ideas and storylines with much of what we saw in the first film. Luckily, nothing from the other far less appealing sequels has made it in to the series yet. Much like what has been done with the FARGO, 12 MONKEYS and SCREAM series, FROM DUSK TILL DAWN covered material already established in its own way. But with some major twists in the vampires being descended from snakes among other things.

While it wasn’t the only thing in Season 1, now that it is out of the way, Season 2 picks up with the rescued queen of the snake vamps, Santánico Pandemonium (the amazing Eiza González), vowing vengeance against the king of the snake vamps for shaming, torturing and keeping her a captive her for hundreds of years. Richie Gecko (Zane Holtz) has been turned into a snake vamp and his blood connection with Santancio pits the two against hordes of the undead and his brother Seth (DJ Cotrona) that has plans of his own of the more monetary variety. The cool thing here is that they managed to still create the same atmosphere from the first season but with all new stories not borrowing from the movie. Plus, the series pulls no punches with good amounts of nudity, gore, violence and harsh language. What more could you want?

Other titles out this week include: