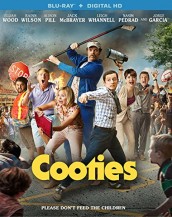 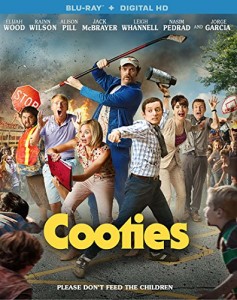 COOTIES – This is one of those movies that is fun on a number of levels and not just because multiple zombie children are murdered in it. COOTIES is about a virus that breaks out as a result of some chicken poisoning and affects just children that have not gone through puberty. Adults only get the trots. So when a school gets infected, it becomes a battle of life and death between a bunch of privileged zombie brats and the teachers that hold enough disdain for them in order to slam their heads into lockers and stab them with janitorial equipment. There are some really good moments with Elijah Wood as a substitute teacher that picks the wrong day to teach and Rainn Wilson has the stereotypical physical education teacher that on one hand declares how much he didn’t realize how much he loved teaching until he had to kill his students and on the other hand rallies the teachers to use a host of office supplies to murder zombie kids. Worth checking out for the humor but also because it puts a nice new wrinkle on the now tired zombie comedy. 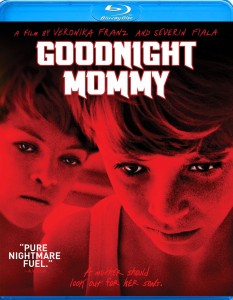 GOODNIGHT MOMMY – Hollywood may have completely run out of ideas but the tanks is still full in our international movie makers, especially in the horror genre where they seem to thrive. GOODNIGHT MOMMY takes an age-old horror movie trope – a loved one has been replaced by someone or something else – and turns it completely on its head in a crazy horror thriller from Germany. Two twin boys have been waiting for their mother to return to them after having a mysterious surgery (whatever it was is not important to the overall narrative). She comes home with bandages completely covering her face and she is decidedly not the same person as when she left. The twins become concerned and start to question whether this person behind the bandages is her mother or someone else. They begin to ask her questions her mother should know but doesn’t, the birthmark on her body is missing and the mole on her face is painted on. They escalate their interrogations in a variety of more, um, painful ways and we start to question if the twins are the ones being crazy or someone has taken the face and body of their mother. It is a unique way to present this type of horror genre and highly recommended. 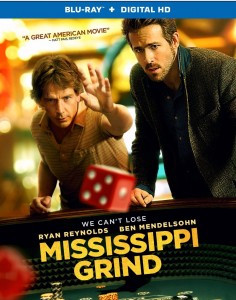 MISSISSIPPI GRIND – Two of the hottest actors in Hollywood – Ryan Reynolds and Ben Mendelsohn – in a gambling thriller set in New Orleans? I’m all in! Unfortunately, it isn’t the second-coming of ROUNDERS or anything even close instead it is more of a profile of two degenerate gamblers that have a serious problem in betting on virtually anything they can get their hands on. Don’t get me wrong, there are a good number of gambling scenes here but the focus is more about the grind (hence the name) of trying to get ahead even when your instincts tell you to quit. But for these two, that form a kindred partnership in gambling and feed off of each other’s gambling addiction. However, given the nature of their addiction, things don’t go well and they find themselves struggling to even make a few bucks before having to come to terms with the fact they are indeed degenerate gamblers. It is an interesting drama and if you enjoy gambling movies this will interest you. 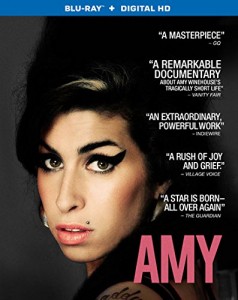 AMY – Not sure that we needed a movie about the life of Amy Winehouse but here it is anyway. The documentary chronicles the life of the sultry singer from her impressive rise, her troubles with drugs and her tragic end when the drugs claimed her life. The cool thing about this documentary is that it features never-before-seen footage of her including some of her musical collaborations as well as interviews with family and friends about her life and what drove her as an artist. There is also a good handful of never-released songs that are included here. There is an audio commentary from the director and new performances that have never been released in the special features. If you enjoyed her as an artist, this is obviously something you will check out and if you like documentaries this too will fit the bill.

CD Review: IN A BETTER WORLD soundtrack
TV Review: ONCE UPON A TIME - Season 1 - “Dreamy”
FURY Highlights this week in Blu-ray, DVD and VOD Releases
WHISKEY CAVALIER: Executive Producer Bill Lawrence on Season 1 on the ...