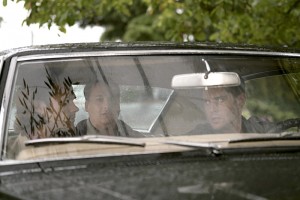 Does everyone who loses their soul behave the same way? Given the mythology of SUPERNATURAL, it’s certainly a worthy question, and it’s at the center of the Season 11 episode “Thin Lizzie.”

“Thin Lizzie” starts as a combination of who/whatdunit, as Sam (Jared Padalecki) and Dean (Jensen Ackles) head to Massachusetts to investigate an axe murder in Lizzie Borden’s historical home, now a combination museum/bed and breakfast. It’s a bit of a locked-room mystery. When a second victim turns up, Sam is sort of hoping it’s a serial killer, while Dean is banking on a ghost.

Then other, similar killings happen away from the property. When Sam and Dean question lurky, sadsack photographer Len (Jared Gertner), they realize that his soul has been sucked away by Amara (Yasmeene Lily-Elle Ball), who they learn in the area. The boys never catch up to her, though they do encounter babysitter Sydney (Tess Atkins), who experiences having her soul removed as something joyous and transcendent, leading her to worship Amara as her savior. Len winds up rescuing the Winchesters by killing Sydney, who plans to sacrifice them to her goddess.

Sam and Dean are grateful, but Len feels that, as he’s soulless, it’s just a matter of time until he starts murdering people. When Dean refuses to kill Len – after all, the guy just saved him, he hasn’t done anything evil yet and he still demonstrates that he has a conscience – Len decides that he’ll claim responsibility for all of Sydney’s killings. That way, he’ll be locked up and can’t hurt anyone.

Dean and Sam head home, unaware that Amara has been watching and listening.

Since we know that Sam spent half a season soulless without arbitrarily murdering people, it did seem a bit of a continuity glitch that Amara’s victims automatically turned into serial killers. “Thin Lizzie” somewhat begs a question that will be familiar to viewers of BUFFY and ANGEL – if one still has a conscience and regret without a soul, what exactly does the soul do? Len by himself would be an argument that it prevents someone from having strong emotions of either joy or misery (sort of like a numbing antidepressant), but then we’ve got the ecstatic Sydney as a rebuttal.

Our boys puzzle over this without coming to much of a conclusion beyond noting that losing a soul apparently affects different people in different ways.

“Thin Lizzie” gets points for tying its big arc – Amara/the Darkness – into a road trip/one-off, and it’s nice to have an acknowledgement of and remedy for a significant inconsistency. Guest actor Gertner does a good job with the gentle-natured Len, whose instincts are still to be a good person, even if his heart is no longer in it.

It’s not so much that the issue plays like a debate among fans (though it does), but rather that neither Sam nor Dean seems to have all that much investment in it. One would suppose that Sam might at least ponder his own choices while soulless a little more. When it’s something this close to home, it feels like the characters ought to be a little more passionate about what they discover.