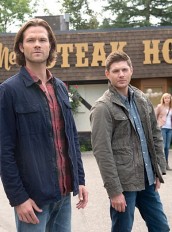 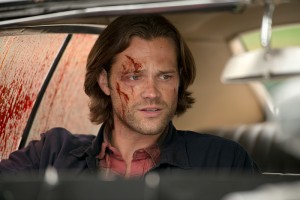 The supposed gimmick in the SUPERNATURAL Season 11 episode “Baby” is that it’s from the point of view of Dean’s (Jensen Ackles) beloved Chevy Impala. This is a decent idea as far as it goes – we’re in Season 11 of a gonzo show, no reason the car can’t have a viewpoint. Trouble is, no one seems to want to go on record, as it were, with suggesting that Baby has an innate persona beyond how Dean and Sam (Jared Padalecki) see her.

So what we actually get is an episode that takes place entirely in proximity to the car, mostly inside but also in front of, in back of and beside it. In meta terms, it’s the equivalent of a bottle show on other series, where they never leave the standing sets. Here, they don’t go into a soundstage or any interiors.

There is a main plot here, with Sam and Dean heading to Oregon to investigate a murder where a body has been found drained of blood and with its heart removed. Castiel (Misha Collins) is back at the Men of Letters headquarters, still recuperating from his now-gone curse. He’s on the phone with the boys, doing research for them, but we never actually see him in the episode. Dean thinks the monster is a were-pire, but it turns out to be a strange creature that’s part-ghoul, part-vampire and as indestructible as a Deadite (yes, we know, that’s a different mythology on a different network). Dean is kidnapped but manages to free himself and kills the Alpha (Teach Grant), which turns the rest of the pack back into normal human beings.

The Alpha has been turning people at a rapid rate, because he wants an army to stave off the Darkness. The boys conclude from this that even monsters are scared.

The much more interesting and fun parts of “Baby” come in its more relaxed scenes, with Sam and Dean on the road. Dean goes to a bar while Sam goes to a diner, but Sam’s the one who winds up scoring with a cute waitress. Dean puts Bob Seger’s “Night Moves” on Baby’s sound system and Sam winds up singing along. Sam dreams of his dad, John Winchester (Adam Cohen), as a young man – or at least an entity pretending to be John, who advises, “God helps those who helps themselves.”

When Sam tells Dean his dream, there is a back and forth, involving Dean’s dreams, Sam’s dreams and Sam thinking maybe the dream was God finally reaching out. Dean is sure that if God has remained silent this long, he’s not going to pitch in now to help out fight the Darkness. The thing is, we can’t tell if this is Dean’s honest opinion or his subconscious remaining linked to the Darkness.

This is all a lot of fun and the sort of stuff that a lot of people actually watch the show to see, though having so much of it in large doses tends to slow the pace down a bit. “Baby” isn’t really about its plot, but a little more complexity (and a little more of Dean battling that still-animated severed head) might have made it even more enjoyable.

“Baby” may not in itself be a memorable episode, but its mood is likely what people recall when they think of SUPERNATURAL at its most personable.