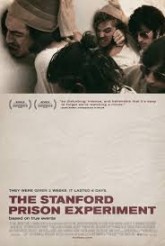 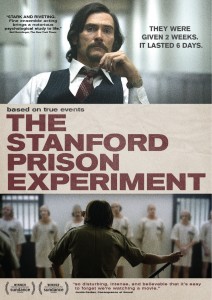 THE STANFORD PRISON EXPERIMENT, based on Dr. Philip Zimbardo’s book THE LUCIFER EFFECT, chronicles a real-life event that was supposed to be a psychological study that morphed into something so disturbing that practically everybody has heard of it, albeit perhaps not by name.

In 1971, Zimbardo, played in the film by Billy Crudup, then a psych professor at California’s Stanford University decided to conduct a two-week research experiment. Twenty-four male students, to be paid fifteen dollars a day for two weeks of their time, would be broken into groups of prisoners and guards to study what effects, if any, their roles would have on them. The “prison” was a set of empty offices in the basement of a campus building (it was summer and most of the faculty was away), furnished like prison cells. There were tapes and cameras. Zimbardo frankly expected that the whole thing would be rather dull.

It’s to the credit of Zimbardo that he didn’t allow things to deteriorate even further, though screenwriter Tim Talbott and director Kyle Patrick Alvarez make it clear that it’s not only the young men supplied with uniforms and nightsticks who were getting high on their own power over others. The movie raises solid questions about Zimbardo’s motives, methods and goals.

It’s likewise to the credit of the filmmakers that they don’t try to overly amp things up for dramatic effect (though they do omit the fact that the experiment was commissioned by the U.S. Navy). The results are soberly credible, with the lead night shift guard (Michael Angarano) quickly taking his new identity to sadistic heights, and some of the more sensitive, conscientious prisoners (Ezra Miller, Logan Miller, Tye Sheridan, Johnny Simmons) suffering various degrees of breakdown.

The young actors are all excellent. Crudup provides a great study in someone who is fascinated, finding unanticipated thrills and trying to remember who he is as a human being all at once. Nelsan Ellis, as a former prison inmate brought in to consult with the psychologists running the study, has a couple of powerful moments as he first takes on the role assigned to him and then reacts to it.

Zimbardo’s original goal was to prove that a response to power and powerlessness was dictated by personality. Instead, he found something different and alarming. THE STANFORD PRISON EXPERIMENT isn’t fun, but it is engrossing, and it provides fodder for thought (and perhaps even self-reflection) a long time after it ends.