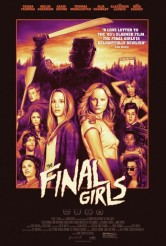 A meta-slasher/comedy that is charming and even touching 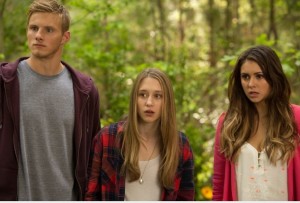 A scene from THE FINAL GIRLS | © 2015 Sony Pictures Home Entertainment

“Delightful” isn’t generally the very first word that comes to mind when describing most slasher horror films. For that matter, “genuinely funny” isn’t necessarily a phrase that applies to some horror comedies. However, THE FINAL GIRLS really is all that.

Written by M.A. Fortin and Joshua John Miller and directed by Todd Strauss-Schulson, THE FINAL GIRLS takes its title from the fact that most slasher horror movies end with one final girl facing off against Jason Voorhees or Michael Myers or Freddy Krueger or whoever. (The moral of most ‘70s/’80s slasher flicks seemed to actually be, even if you are an immortal boogeyman, don’t mess with Jamie Lee Curtis.) The filmmakers then go meta with an original twist.

Max (Taissa Farmiga) is a teen whose single mother Amanda Cartwright (Malin Akerman) is a working but struggling actress whose most famous gig was as Nancy, one of the victims in the 1986 slasher flick CAMP BLOODBATH. Three years after Amanda dies in an accident, Max is coaxed by friends into attending a midnight screening of that cult flick. There’s a fire, Max and four pals escape through a hole in the screen – and find themselves actually in the movie. There’s the considerable problem of being trapped inside a story with an insane, indestructible masked killer, the slightly less deadly but still vexing issue of being stuck in the ‘80s, and then there’s Max having to deal with the fact that the sweet, innocent character Nancy (Akerman again) looks exactly like her late mom.

It’s hard for a movie to have things both ways, but THE FINAL GIRLS succeeds in both having characters who actually understand their situation and having everything feel potentially doom-laden. Thomas Middleditch’s character Duncan is a superfan who knows CAMP BLOODBATH backwards and forwards, but even having passing cultural awareness of how slashers generally work serves the rest of our travelers in good stead.

This all works out to a very good balance between knowing humor, some authentic (if PG-13 rather than R-rated) horror and a surprising amount of even more surprisingly effective moments of friendship and bonding between the characters. Max bonding with the warm-hearted Nancy is sort of a given, but GIRLS also has some honestly warm moments between Max, acerbic Gertie (Alia Shawkat) and “mean girl” Vicky (Nina Dobrev).

There are also wonderful tonal tweaks, from the scratchy midnight screening print to the Technicolor-like color saturation when Max and Co. find themselves within BLOODBATH. With FRIDAY THE 13TH as the obvious prime inspiration here, it’s nice to see that something new and creepy has been done with the mask, while Gregory James Jenkins pays homage to the creepy, distinctive theme from that series.

The home video release comes with a lot of extras, including two full-film commentary tracks (one with director Strauss-Schulson and actors Farmiga, Middleditch and Trimbur, the other with the screenwriters) and deleted and extended scenes with optional director commentary. There are two alternate endings; it’s worth hearing Strauss-Schulson’s explanation of why they were tweaked into the third ending that’s on the FINAL (sorry) film.

THE FINAL GIRLS has blood on its blade, a twinkle in its eye and an ‘80s pop song in its heart. It is absolutely worth your while.