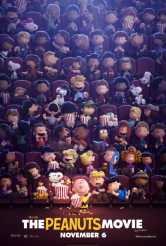 Very much like a long PEANUTS TV special, with unnecessary 3D 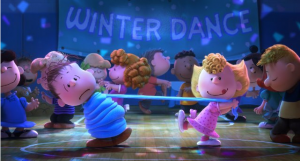 THE PEANUTS MOVIE is a whole lot like a PEANUTS TV special. Charlie Brown pines for the Little Red-Haired Girl, while his dog Snoopy imagines wild feats of aviation as a WWI flying ace combating the notorious German pilot, the Red Baron.

Really, that’s it. The screenplay by Bryan Schulz, Craig Schulz and Cornelius Uliano, based on the immortal comic strips by Charles M. Schulz, creates various challenges for Charlie Brown – brief celebrity, a dance contest and a book report – but the stakes never get too high. True to the TV specials we remember from our childhoods, Charlie Brown has a few moments of luck (unlike in the comics, where he can never catch a break) commensurate with his innate decency. Snoopy is occasionally helpful – and also speaks aloud in his fantasies (voiced by Bill Melendez, who produced most of the CHARLIE BROWN/PEANUTS TV fare), which is less jarring than one might expect.

However, this is pretty much otherwise exactly what we’d expect, except for the 3D, which is, well, strange. Instead of making it look like the characters have sides and backs, they still look 2D, with facial features that are changed by CGI over what look like digitized dolls, smooth for the humans and a short plush texture for Snoopy and the object of his canine adoration. Woodstock and his bird kin are yellow, but don’t appear feathery, and facial features – eyes, eyebrows and mouths – are applied via traditional-looking animation. Some backgrounds are painted with great detail, but are flat, while others are photo-realistic. There is depth of field, but the general effect is one set of flat moving images in the foreground separated from the background. An experiment in removing the 3D glasses reveals that some of the foreground animation remains in focus – i.e., it’s 2D anyway – and the picture is so much brighter and more vivid that it seems like that the film would have been more attractive in 2D on this basis alone.

Kids probably won’t be too bothered by these optical issues and the script is pleasant and amusing in the PEANUTS tradition, even if there’s one big spelled-out moral to the story at the end. There are bits of old-fashioned black and white animation that are cause for warm nostalgia, and the familiar Vince Guaraldi theme music feels as joyful as ever.

As dramatized PEANUTS fare goes, THE PEANUTS MOVIE is acceptable, if not groundbreaking. However, anybody watching it at home would be forgiven for supposing it was made for TV at some earlier point in history in the first place.