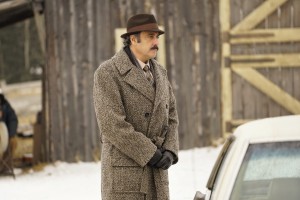 Brad Garrett started out as a standup comedian. The very tall (6’8”) Los Angeles native went on to star as big brother to Ray Romano’s character in nine seasons of the sitcom EVERYBODY LOVES RAYMOND, followed by four seasons as the lead in the half-hour comedy ‘TIL DEATH, with all sorts of other TV, film and voice work before, after and in between.

Now Garrett is doing something different by playing Kansas City gangster Joe Bulo in Season 2 of FX’s FARGO (Mondays at 10 PM) who encountered a very nasty ambush on last night’s episode. Series creator Noah Hawley based FARGO on the film of the same title by Joel and Ethan Coen, but while the tone and region are the same, the characters and time frame are different. This season, FARGO takes place in the ‘70s, with two law officers (Patrick Wilson and Ted Danson) trying to keep the peace as Joe’s mob attempts to muscle in on the Gerhardt family, a local criminal enterprise run by matriarch Floyd (Jean Smart).

ASSIGNMENT X: Were a fan of the Coen brothers?

BRAD GARRETT: Yeah, big time, like everyone else. And I loved the first season [of FARGO], I was hooked on it, and my reps found this wonderful part and hammered away at Noah to be able to read for it, and it’s been an amazing experience.

AX: Is this a new genre for you?

GARRETT: You know, this is a new genre for me. And I just did an episode of MANHATTAN as well, playing the father of the lead, of Ashley Zukerman [who plays Charlie Isaacs]. It’s starting to turn, a little, for me dramatically, which is really wonderful, and it just feels like a natural transition, it really does.

AX: Does your character Joe Bulo report to his higher-ups?

GARRETT: I have a higher-up that I report to, but most of the on-camera people report to me from the Kansas City group.

AX: Would you say that the character of Joe is dark, or is it just that the material is dark?

GARRETT: Both, for sure. He’s a dark cat, but he hears the clock ticking, and my right-hand guy Mike Milligan is [played by] Bokeem [Woodbine] in the show, and he’s nipping at my heels, and that’s what I use as an actor, knowing that my best time of being the main guy may have gone by me, so this may be one of my last jaunts as a foot soldier.

AX: Did you hang out together a bit to figure out your characters’ relationship?

GARRETT: We did that a lot, Bokeem and I. Most of my scenes are with Bokeem – I have some with Jean Smart, who’s amazing – but we hung out. We went out to dinner, we hung out at the hotel. That all helps. And of course, the days on the set are long, so you get to hang out there, but it’s the type of set, you walk on it and you go, “Okay, I’m going to have to up my game here, because there are some real wonderful, talented people.” It was really a joy; I loved it.

AX: Did you have to learn how to do anything for FARGO, like how to shoot a gun?

GARRETT: No. To be honest, a lot of these guys are a lot more macho than me, they do their own stunts. They had to hire a double to run. That’s how uncoordinated I am. They had to actually go, “Run through the snow.” When I ran through the snow, it was less than wonderful. I’m not much of a runner. So luckily, I didn’t have to do a lot of things that these other bad guys did. I’m more of a suit and tie thug. So luckily that prevailed.

AX: Each season of FARGO is closed-ended. Does FARGO feel like a TV show, or does it feel more like a long movie?

GARRETT: It really feels like a film. There’s no question about it – the detail, the writing, it’s just so incredible, so specific. You have an amazing road map, and it’s that script and the directors that let you really feel that comfort to risk and put it out there and try things. But when you have a script like this, it’s a lot easier than on most projects.

AX: Did you see the documentary that EVERYBODY LOVES RAYMOND creator Philip Rosenthal made, EXPORTING RAYMOND, about taking that series to Russia, where they adapted it for Russian TV?

AX: Have any of the other countries asked you to come in and do a guest shot on their versions?

GARRETT: They have not. I’m not a great traveler. I’m a homebody. Calgary [where FARGO was shot] was a schlep for me. Happy to do it, though.

GARRETT: Not really right now. I have my Brad Garrett’s Comedy Club at the MGM in Vegas, I play there for a week every month.

AX: Do you do the bookings for the club?

GARRETT: I’m very involved in it. My brother runs it with me and we’re involved in booking people, and we get some great acts that go through there seven nights a week, and I come out for a week, I host the shows and then let everybody do their thing.

AX: Do you have any talent from that who we should look out for?

GARRETT: There are some guys that are really on the cusp of doing some great stuff. There’s a guy named Quinn Dahle, who is amazing, there’s Drew Thomas, these are guys that are right in the middle of getting their own pilots. I was producing one at 20th for Quinn Dahle, we found him a pilot. Great writers. There are some good, good people coming up. And that’s great about this club, because you don’t have to have a name to work it, and we’re getting the best club acts on the road.

AX: What would you most like people to know about FARGO?

GARRETT: That it’s probably some of the best television, I think, that’s going on out there. It’s never what you think it’s going to be. The surprises are great, the humor is dry and subtle, and I think they’re in for a fun season.