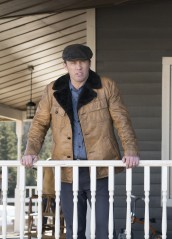 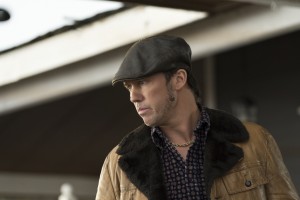 Season 2 of FX’s FARGO, Mondays at 10 PM, is not entirely unconnected to Season 1. In the series created by Noah Hawley, which takes its title and tone but no characters from the Coen Brothers’ 1996 feature, bad things just keep happening in Sioux Falls, North Dakota, and Luverne, Minnesota.

In Season 2, it’s 1979, and State Police officer Lou Solverson (played by Patrick Wilson; the older version of the character was played by Keith Carradine in Season 1) is looking into a mystifying incident that involves both local and out-of-state criminals.

One of the town’s bad men is Dodd Gerhardt, played by Jeffrey Donovan, oldest but none-too-bright son of crime boss Floyd Gerhardt (Jean Smart), who took over the family business when her husband died.

Donovan has played major roles in some major films, including director Clint Eastwood’s CHANGELING and J. EDGAR, and the recently released SICARIO. However, television viewers are most like to know Donovan from his seven years as heroic, wise-cracking ex-spy Michael Weston on BURN NOTICE.

AX: Were you looking to play somebody who is just dumber than Michael Weston in general?

JEFFREY DONOVAN: Well, not in anything. It had to be something where I thought the writing was great. It just happened to be a beautiful coincidence that Noah, I think, and I mean it, one of the smartest people in television, wrote a character that I fell in love with from the moment I read it. But also, he was the exact opposite of Michael Weston. In every way. He was the dumbest guy in the room, I gained thirty pounds, he’s a lug, he has this thick Fargo accent, and he was a vicious, vicious, mean, cold-hearted killer. That’s everything I was not playing for seven years. So I was thrilled when I got it.

AX: It looks like a lot of your work in FARGO is with Jean Smart, who plays your character’s mother. How is it working with her?

DONOVAN: Oh, she’s lovely, isn’t she? There’s a reason why she’s had the career that she’s had and the Emmys that she’s won. And I was so nervous – my first scene was with her, and with Angus [Sampson, who plays Bear Gerhardt] and Rachel [Keller, who plays Simone Gerhardt] and Zahn [McClarnon, who plays Hanzee Dent], and I was so terrified, because it was the first time I was saying the dialect on camera, in the wardrobe, and I just didn’t know if it was going to work. Hopefully, it is working.

AX: Did you have to learn anything in order to play Dodd?

DONOVAN: Well, the accent was incredibly different from anything I grew up with. I grew up in a northeastern Massachusetts town, so we had wicked “hahd” accents that sounded like a Kennedy. And to do the Fargo accent is the exact opposite of how you speak. Literally, it’s the exact opposite physically in the dialect. So it was a big transition and I worked really hard.

DONOVAN: I think it’s like a ten-hour movie [the season is ten episodes long]. I think the characters are so beautifully complex and drawn out that you really get involved like a movie, where you kind of lose yourself, and the way media is now, with being able to binge-watch it, people will sit for four or five hours, because they just are so hooked on these characters.

AX: A BURN NOTICE question – how did you feel about the way it wrapped up? Were you happy with that?

DONOVAN: I was very happy. I think we ended on our terms. I think with [series creator] Matt [Nix] and Bruce [Campbell, who played Sam Ash] and I and Sharon [Gless, who played Michael Weston’s mother], we all got to have our say, “I’d like this storyline, I’d like to have this kind of a scene going out,” and I think we were all happy. I don’t think the fans were happy it’s over, but we must move on.

DONOVAN: I wrapped a movie called SHOT CALLER, which comes out next year, it’s a prison film, and then I just got cast in Rob Reiner’s new movie with Woody Harrelson, LBJ, and I’m playing JFK. I went from Bobby [Kennedy in J. EDGAR], to now going to play Jack.

DONOVAN: It’s exactly what you hope it to be, which is the FARGO tone, but get ready for a very, very vicious ride that’s far bloodier than the first season.