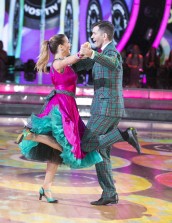 TV Review: DANCING WITH THE STARS – Season 21 – Week 8 – Icon night/Dance off – Andy Grammer is erased from the floor 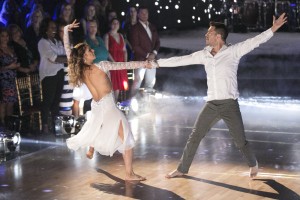 It was a whole lotta gyrating in two hours tonight on DANCING WITH THE STARS. First, it was Icon night where the duos danced tributary dances to their idols. Then, whomever scored the highest of those dances won three points and immunity from not only elimination but from a dance off in the show’s second hour. Nick Carter & Sharna Burgess slammed the competition getting the only perfect score of the night, essentially giving them a stress free second half of the show. Carlos PenaVega & Witney Carson won their dance-off which landed them in second place for the night. Tamar Braxton & Val Chmerkovskiy and Bindi Irwin & Derek Hough tied for third with 28 points, although neither won their dance off. Alexa Vega & Mark Ballas earned 27 points, landing in third place. And Alek Skarlatos & Lindsey Arnold ended the night with 25. Andy Grammer & Allison Holker were booted from the competition, despite winning their toe to toe dance off with Skarlatos & Arnold. Stay tuned.

Nick Carter (singer/actor) and his partner Sharna Burgess
His best! Tonioli said his Contemporary never had a dull moment. Hough said he truly is a dancer. Inaba thought it was the best dance ever.
Scores: Inaba – 10, Tonioli – 10, Hough – 10, Harland – 10

Alek Skarlatos (army Nat. Guard Spec./hero) and his partner Lindsey Arnold
Inspirational. Inaba thought he rose to the occasion. Hough said she would have liked to have seen more side by side dancing in his Contemporary. Tonioli said the dance was incredibly difficult.
Scores: Inaba – 9, Tonioli – 8, Hough – 8, Harland – 8

Bindi Irwin (TV host) and her partner Derek Hough
Infectious! Inaba said her Foxtrot was full out. Hough told her to work on her frame. Tonioli called her a Hollywood sweetheart.
Scores: Inaba – 10, Tonioli – 9, Hough – 9, Harland – 10

Who went home: Andy Grammer & Allison Holker
Who Has Legs To Take Home The Mirror Ball: Bindi or Nick