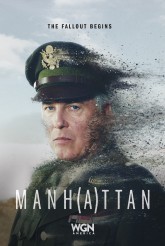 The series creator talks new season, plus history vs. invention 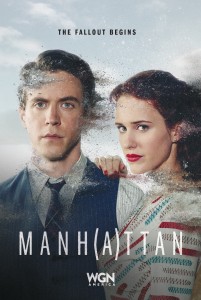 Sam Shaw created the series MANHATTAN, now in its second season on WGN, Tuesdays at 9 PM. Although the title may suggest the other name for New York City, the show instead deals with the Manhattan Project, when a group of scientists gathered in secret at Los Alamos, New Mexico, to work on what would become the atomic bomb in the 1930s and 1940s. Season 1 had historical figures like J. Robert Oppenheimer (played by Daniel London) mingling with fictional scientists like Dr. Frank Winter (John Benjamin Hickey) and his botanist wife Dr. Liza Winter (Olivia Williams).

At the end of Season 1, Frank went to jail, mistakenly believed to have committed espionage. Season 2 sees him undergoing a crisis of conscience as the devastating applications of the Manhattan Project become clearer.

On the day this interview is conducted, it happens to be executive producer/show runner Shaw’s birthday. Asked if he’ll be doing anything to celebrate later on, he replies, “I’m going to be in an editing room all day, so I might eat a piece of cake or something like that. This is it.”

SAM SHAW: Well, it’s kind of the latter, in that this is not a creative process I would recommend to any human being. But I started writing something set in the present that was about the war on terror, and as it evolved, it became something very different, and part of it was that in the research, I found that it was not just the bomb that was born at Los Alamos, that this story of this bizarro community that was built almost overnight during World War II was really an origin story that was about the birth of the military/industrial complex and about the birth of a different kind of industrial secrecy state and about the birth of a whole set of moral questions connected with the way we prosecute wars, and also what’s a way to talk about what secrecy does to people involved in that work.

AX: In Season 1, you had J. Robert Oppenheimer relatively in the background and a lot of original characters in the foreground. As you go forward with Season 2, are you going to need to have the original characters doing things that were done by real people?

SHAW: Well, even in Season 1, that was a dramatic question that we had to sort of figure out and reckon with. There was a guy who in the [real-world Los Alamos] hierarchy, in the pecking order, sort of occupied the place that Frank occupies in our show, a guy named Seth Nedermeier who ran this implosion group that really was this ramshackle, tiny operation.

I was a big fan of this really brilliant historian named Alex Wellerstein [now one of MANHATTAN’s historical consultants], he writes a very brilliant blog about nuclear history, so I was very nervous to contact him and see if he wanted to be a consultant for Season 2, because for all I knew, maybe he hated the show and how we’d metabolized history in the depiction. I guess the way that I like to think about our show, and what he said, which is sort of the rule that I adopted, it’s almost like, in the “many worlds” theory of physics, our show kind of takes place in an alternate universe, and there are some different players in this world of Los Alamos, but the laws of gravity are all the same and the laws of science and the rules that govern the place. So that’s a long-winded way of saying, there are a handful of more historical figures who wend their way through the story here and there, but still, as it was last year, our show kind of takes place in this alternate universe, where the characters who are at the center of the world’s first atomic bomb are fictional characters. 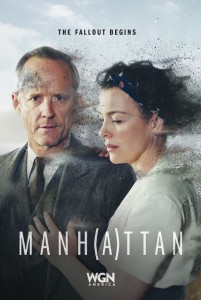 AX: When does Season 2 open in relation to the end of Season 1?

SHAW: One thing we do a lot during this season is play with time. This may sound like a cop-out answer – we pick up almost immediately after the end of last season, and pick up well in the future, and sort of move around. We got to the end of last year and we made a lot of messes in the story, we exploded a lot of the storytelling structures and part of the business of especially the first half of this season is sorting through all the wreckage and figuring out what comes out of it.

AX: It seems like the espionage storyline may be more prominent in Season 2 …

SHAW: Yes, absolutely. That was the thing that was exciting to us. We spent the whole season last season writing about the human cost of a very destructive witch hunt for imaginary spies. There were a lot of people who were painted with the brush of espionage, and characters who were called traitors who weren’t, and there was a lot of human wreckage. By the end of the season, we finally reveal that one of our characters is a legitimate spy, and so this season, we tell his story, although I hope that we succeeded in telling the story in a way that will upend some of the conventions of spy stories. The truth is, there were real spies at Los Alamos, and their motives were really fascinating and complicated.

AX: What would you most like people to know about Season 2 of MANHATTAN?

SHAW: The biggest thing, I think, is that obviously our show deals with issues of science and war, but it’s really a human show, and so I hope people will come to it prepared to have their expectations exploded, because it’s a big show that is about a lot of different corners of the human experience.

This interview was conducted during WGN’s portion of the Television Critics Association summer press tour at the Beverly Hilton Hotel.