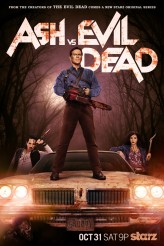 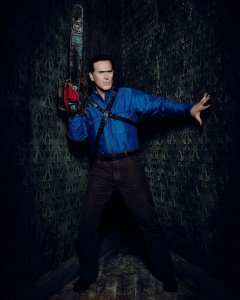 Not everything from thirty years ago can stand revival today. Hell, a lot of things can’t – we’re not going to enumerate them here. But you know what can? THE EVIL DEAD.

For those who don’t know the history, we’ll repeat it for you. The original, made on a shoestring budget in 1979 and released in 1981, was sort of straight-faced. It was also the theatrical debut of director Sam Raimi and actor Bruce Campbell. EVIL DEAD II, made on a somewhat thicker shoestring and now with wild black comedy existing side by side with the scares and gore, came out in 1987. This is the movie people generally associate with EVIL DEAD – Campbell’s thick-headed Ash insists on opening a book called the Necronomicon Ex-Mortis and the woods come alive with malevolent hellish spirits that possess dead bodies, live people, inanimate objects and even Ash’s right hand, which makes for one of the more singular combats in cinematic history.

ARMY OF DARKNESS, the third film in the series, was made by Universal and came out in 1993. A quasi-remake, executive-produced but not directed by Raimi, was released in 2013, but Ash only showed up in literally the last second.

Now EVIL DEAD is on premium cable in series form as Starz’s ASH VS. EVIL DEAD, executive-produced by Raimi – who directed and co-wrote the premiere, “El Jefe” – and Campbell, along with Raimi’s usual partner Robert Tapert (producer on all the EVIL DEAD movies) and Craig DiGregorio. Time has not made anybody slow a step, pull a punch, cut back on the blood or lose the mixture of effective jump scares and frenetic absurdity that other genre productions have sought to imitate (seldom with the desired results).

It’s been thirty years since Ash survived his deadly cabin in the woods experience. He’s got a wooden right hand as a result, he’s still got a crappy job, he’s still crude and dumb, and he once again does something really stupid that causes a new rising of Deadites, as the demons are called. Without knowing that the sudden blast of weirdness is Ash’s fault, hero-worshipping co-worker Pablo (Ray Santiago) thinks that Ash is the right man to stand up to these malign forces. Despite initial skepticism, Pablo’s pal Kelly (Dana DeLorenzo) comes around to this belief as well. 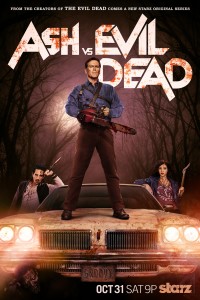 It’s all here – those whooshing, low-to-the-ground p.o.v. shots that convey the swift approach of evil, preposterous objects going on the attack, geyser blood spurts and Ash’s trusty chainsaw. The wonder of it is that Raimi and his co-writers Ivan Raimi (a brother) and Tom Spezialy are so nimble at putting everything back together so that it’s as good as our fond memories. Campbell, looking better after three decades than dialogue about Ash’s appearance would suggest, is more than up to the call of duty here, whether it’s his timing on Ash’s lines or his leaps around a space as he wrestles with an unlikely assailant. Jones is very good as the designated normal person in the proceedings, and Santiago and DeLorenzo are completely on board with the tone.

ASH VS. EVIL DEAD is perfect fare to debut on Halloween. For those who wish the holiday would last longer, it’s here to bring that All Hallows Eve to every Saturday night as long as it’s on.