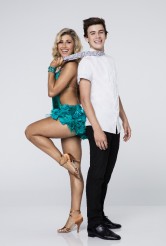 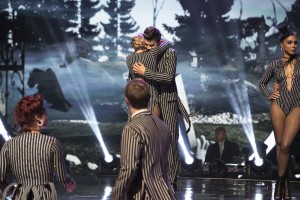 Halloween Horror /Team Dance night on DANCING WITH THE STARS was creepy, crazy and campy! One of the best team dances ever was performed and no, Derek Hough’s team did not win. Nick Carter’s team did a kick ass THE NIGHTMARE BEFORE CHRISTMAS themed team dance that was off the charts awesome. But that’s OK for Hough. It’s always good to get knocked down a notch every now and then; it builds character and makes you better for it. Hough and his partner Bindi Irwin did, however, end the night in first place with 58  out of 60 points. Out of no where Andy Grammer & Allison Holker have come out guns ablazin’, last week they received a perfect score pushing them way up the leader board. This week, still wavering at the top, they tied for second with Carlos PenaVega & Witney Carson with 56 total points.  Pena Vega’s wife Alexa & her partner Mark Ballas are right behind them with 55 points. Sadly, Hayes Grier & Emma Slater who were part of a three way tie for second were sent home tonight. Alek Skarlatos & Lindsey Arnold ended their ghostly night in last place with a not-far-from-the-others 53 points. Tamar Braxton & Val Chmerkovskiy and Carter & Sharna Burgess received 54 points. Stay tuned!

Alexa PenaVega (actress) and her partner Mark Ballas
Not perfect but entertaining. Carrie Ann Inaba said she was proud of her. Julianne Hough said she needs to be a little more consistent in her Paso Doble. Bruno Tonioli said it was flavorful.
Scores: Inaba – 9, Tonioli – 9, Hough – 9, Harland – 9

Carlos PenaVega (singer) and his partner Witney Carson
Strong! Inaba said he excelled in his Paso Doble. Hough said he nailed it. Tonioli thought it was on an epic scale.
Scores: Inaba – 9, Tonioli – 9, Hough – 10, Harland – 9

Andy Grammer (singer) and his partner Allison Holker
Intense. Inaba thought his Paso Doble was tough. Hough said she was rather turned on by it. Tonioli said he lost some shaping.
Scores: Inaba – 9, Tonioli – 8, Hough – 9, Harland – 8

Who went home: Hayes Grier & Emma Slater
Who Has Legs To Take Home The Mirror Ball: Bindi or Nick