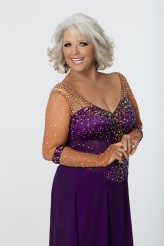 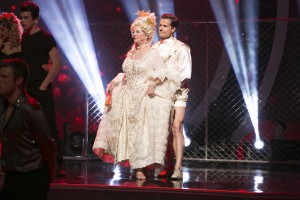 DANCING WITH THE STARS starts to get serious come the half way point of the season and we are there! Couples are either slipping down the leader board or rising up to the challenge. Tonight, with famous movie or iconic music video night, it was make it or break it time. Unfortunately, Paula Deen & Louis van Amstel have broken their chances of making it ’til the end; they were the 9th duo eliminated. Not surprising, considering the competition has turned fierce with three perfect scores tonight – Andy Grammer & Allison Holker, Bindi Irwin & Derek Hough and Tamar Braxton & Val Chmerkovskiy.  Nick Carter & Sharna Burgess narily missed a perfect score with 39 out of 40, while Carlos PenaVega & Witney Carson missed the big 40 by two points. Hayes Grier & Emma Slater got perfect 8s while Alexa PenaVega & Mark Ballas and Alek Skarlatos & Lindsey Arnold received 30 points. Stay tuned!

Tamar Braxton (singer/host/producer) and her partner Valentin Chmerkovskiy
Determined! Tonioli called her Jazz routine a knockout. Newton-John was impressed. Hough said it was flawless. Inaba said it was the hardest dance of the night.
Scores: Inaba – 10, Newton-John- 10, Tonioli – 10, Hough – 10, Harland – 9

Andy Grammer (singer) and his partner Allison Holker
Hard to keep up but he did. Inaba said he had great grace. Hough said he keeps getting better and better. Newton-John said she would be happy to dance with him. Tonioli said he succeeded in his Jazz routine.
Scores: Inaba – 10, Newton-John – 10, Tonioli – 10, Hough – 10, Harland – 9