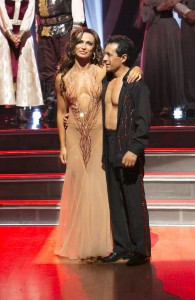 DANCING WITH THE STARS saved the best for last on this second night of hometown boogie. Tamar Braxton & Val Chmerkovskiy lit up the dance floor with their Charleston, giving them the first nine of the competition and also earning them a first place finish with 25 for the night. Boy bander Nick Carter & Sharna Burgess are right behind them with 24 points. And in a three way tie – Bindi Irwin & Derek Hough, Hayes Grier & Emma Slater, and Andy Grammer & Allison Holker all ended the night with 23 points. Still holding on are Gary Busey & Anna Trebunskaya at the bottom of the leader board. Stay tuned!

Kim Zolciak (reality star) and her partner Tony Dovolani
Light on her feet. Inaba said she is a beautiful mover in her Foxtrot. Hough told her to use her energy. Tonioli told her to push forward
Scores: Inaba – 6, Tonioli – 6, Hough – 6, Harland – 6

Nick Carter (singer/actor) and his partner Sharna Burgess
Elegant. Inaba said his Waltz had a lot of passion. Hough said he needs to push up his chest. Tonioli said he was back on track.
Scores: Inaba – 8, Tonioli – 8, Hough – 8, Harland – 8 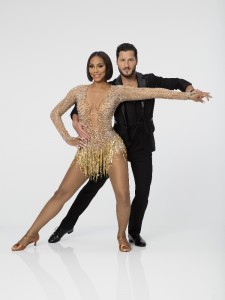 Alek Skarlatos (army Nat. Guard Spec./hero) and his partner Lindsey Arnold
Not his best. Inaba said he had power. Hough said he started out strong in his Quickstep. Tonioli called him Alek the great.
Scores: Inaba – 7 , Tonioli – 8, Hough – 7, Harland – 8

Gary Busey (actor)  and his partner Anna Trebunskaya
More walking than dancing. Inaba said he was fun to watch. Hough said he was infectous. Tonioli said he was off kilter in his Paso Doble.
Scores: Inaba – 5, Tonioli – 5, Hough – 5, Harland – 5

Who went home: Victor Espinoza & Karina Smirnoff
Who Has Legs To Take Home The Mirror Ball: Bindi or Tamar