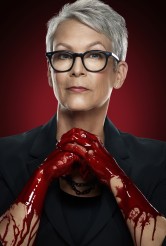 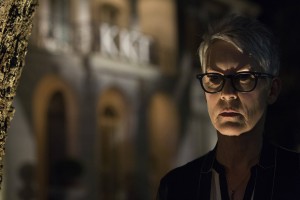 SCREAM QUEENS, which premieres Tuesday, September 22 on Fox Network, is the latest brainchild of Ryan Murphy, Brad Falchuk (who work together on AMERICAN HORROR STORY) and Ian Brennan (who worked with Murphy on GLEE). It’s a serialized, satirical take on the slasher genre, with a snooty sorority being terrorized by a mysterious murder and traumatized by being forced to admit – the horror! – non-snooty pledges.

Jamie Lee Curtis stars as Dean Cathy Munsch, who loathes the sorority and mandates that it to become open to anyone who wants to join. Curtis has done all sorts of roles, including starring opposite Arnold Schwarzenegger in James Cameron’s actioner TRUE LIES and the feature comedy A FISH CALLED WANDA, plus four seasons of the half-hour ANYTHING BUT LOVE. Still, Curtis will likely always be associated with the string of horror classics she did in the Seventies and Eighties, starting with the original HALLOWEEN and encompassing THE FOG, PROM NIGHT, TERROR TRAIN, ROAD GAMES and HALLOWEEN II. In short, when people think of movie “scream queens,” Curtis is at the top of most lists.

We got a moment alone with Curtis to ask the following:

ASSIGNMENT X: In the horror movies you did in the Seventies and the Eighties the ultimate message seemed to be, even if you’re an immortal masked killer, do not mess with Jamie Lee Curtis.

AX: Would you say that’s the moral here?

CURTIS: I think that’s the intention. I think that we’re going to find out a lot more about Dean Munsch, and she may go from hating these girls to ultimately loving and protecting these girls. Who knows? We don’t know where this is going to go. And the beauty of it is that it is in the minds of those three guys [Murphy, Falchuk and Brennan], and as long as we all do what we’re supposed to do, who knows what’s going to happen?

Curtis has just wrapped up a Fox-sponsored Q&A panel for the Television Critics Association with the series creators and her SCREAM QUEENS cast mates, including Lea Michele, Keke Palmer, Skyler Samuels, Abigail Breslin, Nasim Pedrad, Diego Boneta and Niecy Nash. During the panel, Curtis addressed a number of topics.

“We are the recipients of it. We are the actual people that say the horrible things. And I think what’s so fantastic about the show is that it is a social satire. And actually, we say what people think. You know, we all live in this protected bubble where we’re all trying to behave and look a certain way. And the thing that’s so brilliant about this show is, it strips away, it flays the imagined behaviors of human beings, and it actually shows, I think, what people really are, which is inherently dark, inherently unhappy, and angry, frustrated human beings, who are trying so desperately to hold it together. And what’s so fun about this show is that everything you think about every single one of these characters – you don’t know sh** about anything. Because everyone here is wearing a mask. And this show peels off those masks each week, and it’s brilliant.”

On whether there is a feminist angle to SCREAM QUEENS, and the differences between feminism when Curtis was coming of age and feminism now …

“To the feminist angle, that’s what I get to represent in the show, is that I was raised in feminism. And I am trying to live and work with a group of young woman who [are] very different [from earlier feminists]. [The late playwright] Wendy Wasserstein would love this show, because it’s saying it like it is right now. And to be honest, the way it is right now is challenging. And this show is going to expose that and, I hope, create a dialogue. I mean, not to get heavy – don’t get heavy. It’s not heavy, [it’s] super-funny. But it will ask the question. And that’s an important question to ask in today’s society, with our obsession with self-promotion and Instagram and Snapcat and all the rest of it, which is all about yourself. And this is going to expose that in a very big way. So parents are going to love this show.”

“I will give you all just one little secret, which is, I’ve been in a lot of comedies, and the writing on this is so strong and so funny. And we have people who can improvise. We have Niecy Nash, who, yes, she says what they write, but then she says way more than that. And Nasim. Kevin Kline, to this day, doesn’t speak to me because I ruined more great takes [of Kline’s, by laughing] on A FISH CALLED WANDA. And here is my secret. I hold either a pushpin or a toothpick between my fingers, and I push really hard during every scene. Watch my hand next time you see a scene. My hand is below the frame, and I don’t care what’s happening, whatever Niecy Nash is throwing at me, I am squeezing a pushpin between my fingers to make it hurt really bad so that I will not laugh. And that is a testament to the writing. It’s very, very funny, and the situations are crazy.”

“Every single actor in every single scene at some point is given one direction, which is, ‘Okay, now do the scene as if you’re the killer,’ so that they actually have a bank of interpretations where you could then go back and thread the whole show together, and it would actually knit the killer’s vest with each character. So I am not the only person who has been given that direction. Every actor on the show has, which also keeps you on your toes and guessing. If you look at the pilot, Dean Munsch looks at Chanel [Emma Roberts] and says, ‘I hate sororities and I hate you.’ And I think that just sort of says it for the post-feminist crew out there, which is that this exclusion, this crew of [mean sorority girls] and the way they dress and the way that they act and behave. I understand that it is a point of view from Dean Munsch and not necessarily my own, but I think it speaks to something that is a question mark for a lot of people. And the show is going to expose both the good sisterhood stuff and the bad. And you’re going to love it.”