The series creator talks about his historical romantic drama 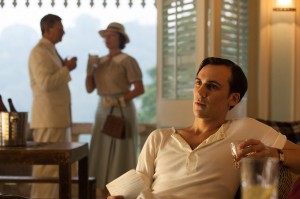 Paul Rutman created INDIAN SUMMERS, now in its first season on PBS Sunday nights; it’s already been renewed for a second year. The epic drama, co-produced by Boston’s WGBH and England’s Channel Four, spans the years 1932 through 1945, as the British presence in India known as the Raj comes to an end. The series takes place in the small mountain resort of Simla, where working-class matron Cynthia Coffin (played by Julie Walters) has opened a hotel that caters to well-off English people escaping the summer heat in the lower climes.

Rutman, an established writer in British television, has a unique family perspective on the relationship between England and India, as his wife is Anglo-Indian. As Rutman explains, “She was born in India, she came to the U.K. when she was about five. Part of this story is rooted in her own family. Her grandfather was a clerk working for the British Civil Service, and so my mother-in-law, her childhood was spent spending her winters in Delhi, and then every summer they would go up and they would spend the summer in Simla for six months, because they were driven by his work. And her grandfather was always very sort of pukka about the British, and “We have to eat with knives and forks,” and he was a bit like Darius Delal [played by Roshan Seth], the father in the family. So that was sort of the long shadow cast by her family. I think her own view is that we had no business being there and that if one country takes another country as a subject race in their own turf, they should get out.”

ASSIGNMENT X: Can you provide a historical context for what the British were doing in India?

PAUL RUTMAN: Well, Gandhi said that “The British didn’t take India from us, we gave it to them.” And I think what he means by that is, there were only about three thousand British civil servants there, about fifty thousand soldiers, ruling a country of three hundred million. And you look at the numbers – you think, how the hell did we get away with it? George Orwell actually called the Raj the biggest con trick in history. And I think what the British did was very, very clever, slowly cultivated setting up native princes. A lot of India was ruled by native princes, who had their own little fiefdoms, and the British left them alone to do whatever they liked in return for loyalty to the Crown. So it was in their interests for the British to stay. And also, more and more, there were opportunities for characters like Aafrin Dalal [played by Nikesh Patel] to get jobs there, to do rather well, in the English administration.

There is an argument that in the nineteenth century, the great Industrial Revolution, the great superpower that was Britain at the time, was funded by the Empire. So we built railways in India, which was a great contribution to India, but where did that steel come from? It came from Britain. So we provided a closed market. British steel was made, it was shipped out with British engineers being employed to work there. And similarly, all the cotton manufacturing. So India was a huge cotton exporter before we showed up, and then we actually imposed tariffs on their own cotton, so Indian cotton was grown, sent back to the Lancashire mills in the north of England, where Indian products were made, and then shipped back to India to be sold back to Indians.

AX: Once you got the idea for INDIAN SUMMERS, how did you determine who your characters needed to be?

RUTMAN: I think I very rapidly decided we had to have a British family and an Indian family. I’m fascinated by this little Indian community of Parsees, who are a tiny community in India, there were only about eighty thousand then; there are fewer than fifty thousand now. They came over from Persia about a thousand years before and did terribly well in India. Gandhi said that they were in numbers beneath contempt, but in contribution beyond compare. So lots of businessmen, lots of educators were Parsees. They’re an endangered people themselves in some ways, because they’re dying out, the same way the British are dying out, so facing some of the same challenges. I guess I wanted to have those two families. And then I wanted a big, epic love story. One of my favorite films is DOCTOR ZHIVAGO, and I love that love story, I think it’s just astonishing, and I wanted to find stories of friendship and love that were big enough to span fifteen years, to try and somehow tell that story of two different nations.

AX: There’s a major romance between an Indian man and an English woman. Historically, it seems like when there were Caucasian Westerners involved with non-Caucasians, the men could do whatever they wanted, and nobody blinked an eye. It was only when non-Caucasian men got involved with Caucasian women that people started freaking out.

RUTMAN: I think that’s absolutely right. There’s a missionary school we have, which is set up in Episode One, for the discarded children [of Anglo-Indian relationships]. Certainly, in certain environments, in the tea plantations, men could have their pick of the women and nobody really minded, and they would do the honorable thing up to a point and make sure their kids were paid for. Sometimes they didn’t [pay for the care of the children] and the children were discovered in the gutters of Calcutta, which is why the schools like Dougie Raworth’s [played by Craig Parkinson] were set up. In fact, there’s a line in Series 1 where Aafrin [played by Nikesh Patel] says, “I’ve heard of British men taking Indian wives, but never the other way around.”

AX: THE JEWEL IN THE CROWN, based on the novels by Paul Scott, was a miniseries that also covered the end of the Raj, though from a different perspective. It was a huge hit for the BBC and PBS in the Eighties. Did you look at that at all?

RUTMAN: Do you know, the honest answer to that is, no, I didn’t. I started watching the first episode, and then I thought, I’m not going to do that, because I don’t want it in my head. I don’t want to feel it kind of breathing down my neck. So I have avoided THE JEWEL IN THE CROWN. I have read lots and lots of Indian books, history and fiction, but I stayed clear of that.

RUTMAN: I think, in a way, the joy of that place was that it was sort of far above the clouds. So it was a place where the British came to dance and forget. So they had a wonderful time and they could sort of leave it behind. In a way, the series is about the British running away from history. That’s sort of the show.

AX: And what would you most like people to know about INDIAN SUMMERS?

RUTMAN: I think the things I would to know going in is that this is not a history lesson, that this is, I hope, an involving, passionate drama, which is immersive, set on a big canvas. I hope it’s a very involving drama. I love it – I love the characters just as much as I can.

This interview was conducted during PBS’ sessions for the Television Critics Association summer press tour at the Beverly Hilton Hotel.