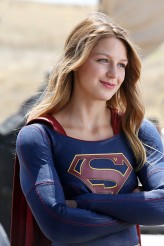 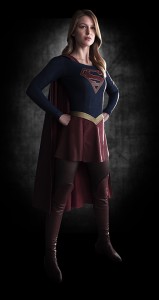 Greg Berlanti is one very busy writer/executive producer these days. He’s got the new thriller BLINDSPOT in its first year on NBC, the police drama/comedy THE MYSTERIES OF LAURA in its second year on NBC and three D.C. Comics-derived series on The CW. ARROW is starting its fourth season, its spinoff THE FLASH is on Season 2 and LEGENDS OF TOMORROW, a spinoff of the other two, will premiere midseason.

Besides all that, Berlanti is part of the creative team, with Ali Adler and Andrew Kreisberg, on SUPERGIRL, the new CBS series that premieres on Monday, October 26. Melissa Benoist stars as Kara, Superman’s cousin who was originally sent to Earth to watch over him but, due to getting stuck in a time warp, arrives after he’s already established himself. Kara starts out by hiding her abilities, but by the end of the first episode, she discovers that she likes stopping plane crashes with her bare hands.

There are links here to some of Berlanti’s shows on The CW – CBS and The CW are sister networks, and SUPERGIRL, like ARROW and THE FLASH, is based on characters created in D.C. Comics.

ASSIGNMENT X: How is it having all of this stuff on the air at once? Do you ever feel overwhelmed, or are you happy keeping all the plates spinning?

GREG BERLANTI: It’s a learning curve for me this year. There are certain years that are growth years, where you’re learning as you go, but it’s manageable. The key is, I’ve been working with a lot of the same people [Kreisberg is on all of Berlanti’s CW shows, Adler and Berlanti had worked together on NO ORDINARY FAMILY and D.C. Comics’ Geoff Johns is involved], so that really helps me.

BERLANTI: They’re all different. Even sometimes within the CW shows, every year, we try and change it up, in the sense of, we don’t want anything to feel too [formulaic]. So you try and learn from what you’ve done, but also, change the arithmetic enough that it really does feel fresh and new. And so the mythology here is different, in part because there’s part of it that’s off-planet, and there’s a whole element of Krypton and her flashbacks there, and that’s very, very different for us. I would say the one thing that’s similar is, there is a Big Bad and there’s always twists and turns within that, and then there are the episodic villains, too.

AX: Obviously, your CW shows can and do cross over with one another. Since CBS and the CW are under the same corporate family, can SUPERGIRL cross over with ARROW and/or THE FLASH?

BERLANTI: Right now, there are no plans to do it. Obviously, in success, who knows? The other thing is that, on ARROW or FLASH, we’ve never mentioned that there’s Superman flying around, and in SUPERGIRL, obviously, Superman is flying around. So that would be one thing we would have to figure out and address down the line. But we’re far away from any of that.

AX: Are we ever going to meet Superman on SUPERGIRL?

BERLANTI: In various different ways in terms of how he’s expressed in the pilot now. But when we pitched it, it’s like, “He’s there, but he’s not the important thing. She’s the important thing.” And there’s already I think some deeply interesting and emotional ways that he comes up.

AX: In the pilot, there is a strong undercurrent of flirtation between Kara and James Olsen, formerly known as Jimmy Olsen, who’s played by Mehcad Brooks. You have this with some supporting characters on ARROW, but this seems like the first time in a comic book adaptation in TV or film where you have a potential romance between an Anglo woman and an African-American man. There’s a reference to one that’s ended on MARVEL’S AGENTS OF SHIELD, but …

BERLANTI: Oh, that’s interesting. I hadn’t thought about that. Obviously, on FLASH we have an interracial romance – his original love interest in the comic books, Iris West [played by Candice Patton], on our show happens to be black. We hadn’t considered [the casting of James Olsen] that way. I think it was more, we broached it as, we actively try and do colorblind casting when people come in. And Mehcad came in and he was just James Olsen to us. And so we felt like if he was to all of us, hopefully he would be to the audience, even though he looks a little bit different than Jimmy Olsen looks in the comic book.

AX: A big part of SUPERGIRL is the Department of Extranormal Operations, a government agency that has turned up in some other D.C. Comics titles, but not SUPERGIRL. Was it your idea or DC’s idea to make the DEO part of this show?

BERLANTI: Well, when we were first hatching the show, we were in close quarters with Geoff. I always forget who says what – we kind of all toss ideas into a bucket, but we were in close proximity to each other when it happened, whether he suggested it or we did.

AX: Did you come into it feeling that there was a space in the story that had to be filled by some sort of secret government group?

BERLANTI: Well, for us, yeah. We always try to find an element that’s different from the other shows that we’re doing, and obviously, alien-hunting is not on the other shows. So that was something fun that we thought that we could do with this.

AX: While there are probably some aliens who are soft and easy to manage, how do you make it convincing that there are human beings who are unpowered but badass enough to hunt malevolent Kryptonians?

BERLANTI: It’s different from episode to episode how we do it. Obviously, there’s the element of Kryptonite, which is an example of something that harkens back to the original comic, but there’s all sorts of different ways. Honestly, that’s always the fun of the team in the episode, which is, “How do we stop this guy, or girl? Do we stop them through ingenuity, do we stop them through sheer brute force?” That’s always part of the dilemma of the episodes.

AX: The DEO on SUPERGIRL is headed up by Hank Henshaw, who is played by David Harewood. David Harewood played the head of the CIA for two seasons on HOMELAND on Showtime. Were you a fan of HOMELAND?

AX: Can you tease anything about the new seasons of ARROW and THE FLASH?

BERLANTI: I would say both the shows are very much building up to the crossovers and to the LEGENDS OF TOMORROW spinoff in a way. And in a sense, story-wise, the characters that are in LEGENDS will appear on either FLASH or ARROW separately in that first half of the year, and it will kind of build and grow and grow into those crossovers that happen prior to the midseason episode, just like last year.

AX: What would you most like people to know about SUPERGIRL?

BERLANTI: That it’s fun, that it’s action-packed, that they’re hopefully going to be surprised every week about what they get and that it is definitely the most large-scale production of one of these kinds of shows we’ve ever done.

This interview was conducted at the CBS/CW/Showtime party for the Television Critics Association summer press tour.