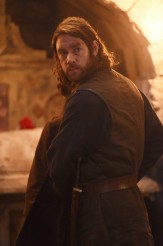 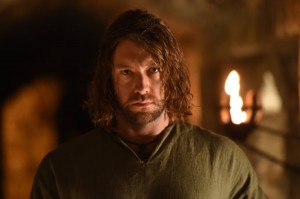 In THE BASTARD EXECUTIONER, now in its first season on FX Network Tuesdays at 10 PM, Lee Jones plays Wilkin Brattle. Wilkin is a soldier in fourteenth-century Wales who wants a peaceful village life, but a combination of personal catastrophe and an apparently supernatural message cause him to accept a position as traveling executioner under the command of scheming politician Milus Corbett (Stephen Moyer).

Jones, an Australian actor, traveled halfway round the world for BASTARD EXECUTIONER, created by Kurt Sutter (SONS OF ANARCHY). In a conversation during FX Network’s portion of the Television Critics Association press tour, Jones talks about playing the new series’ conflicted title character.

AX: Did you have any hesitations about going to Wales to work?

LEE JONES: No, not at all. I mean, what an opportunity, to live somewhere else and immerse yourself in that kind of a role.

AX: Had you been there before doing THE BASTARD EXECUTIONER?

JONES: No. I’d never been to Wales. I’m actually of Welsh stock, so it’s been really nice to get a taste of what that’s like. I’m so busy on this, I really haven’t [had a chance to see the country], but it’s helpful in a way, because it’s just focus. I’m here to work and there are no distractions. I lose myself in it.

AX: Without giving away spoilers, can you talk about what Wilkin’s priorities are?

JONES: I think it’s along the lines of the delicate balance between finding his higher purpose, and also the revenge aspect.

AX: Is Wilkin comfortable doing his own fighting, or is he hoping to get into a position where he can possibly get somebody to fight for him?

JONES: I think he’s a born fighter and I think that’s what he starts out running from, but he fights when he has to.

AX: Wilkin has a complicated relationship with Corbett. Does Wilkin let Corbett influence him because he thinks Corbett knows what he’s talking about and Wilkin can learn from him, or is it because Corbett has a hold over him?

JONES: [laughs] It’s more of the latter. He has a complete hold over me. But having said that, we do share a history there, so I have a hold over him as well. But my fighting for survival is where I’m at at the moment.

AX: Wilkin also has a complex relationship with Annora, the pagan mystic played by Katey Sagal …

JONES: Yes. That ties in to what I was speaking of in regards to looking for a higher purpose. She shares the knowledge of what I have experienced in terms of looking for that, and is really becoming a confidante. She’s driving me, she’s pushing me to hang in with this.

AX: Reportedly, the show was originally going to be set in England, and then when Kurt Sutter got to Wales, he got very caught up in its look and mythology …

JONES: I think when Kurt got to Wales, that history perhaps caught him by surprise and it drove him.

AX: The characters have a unique way of expressing themselves …

JONES: I think Kurt’s done really quite an amazing job with the language. I mean, it’s f***ing hard to learn [laughs].

AX: Speaking of learning things, how’s your sword choreographer on this?

JONES: Amazing. We have an amazing team. They got me in shape in two weeks. We had a two-week boot camp of horse-riding and fight training. It’s now my new favorite thing. It’s really good fun doing that stuff.

AX: Do you like the one on one fights, or the group fights?

JONES: I like the group fights, actually, coming from all angles.

AX: What’s your favorite part of the job so far?

JONES: It’s getting to explore the full gamut, the full range of emotions and situations that Wilkin goes through. And learning that skill set of horse-riding and fighting, it’s been a real adventure that way.

AX: What would you most like people to know about THE BASTARD EXECUTIONER?

JONES: That it’s visceral, gritty, real. Get into it.