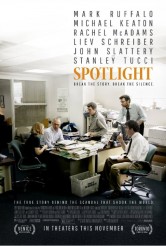 All the Cardinal’s Men 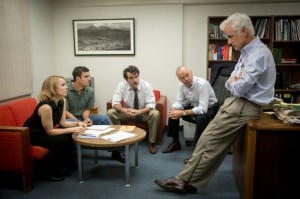 SPOTLIGHT harks back to ALL THE PRESIDENT’S MEN, the 1976 feature film about Washington Post journalists Bob Woodward (played by Robert Redford) and Carl Bernstein (played by Dustin Hoffman) digging into the story of the break-in at the Watergate Hotel, which ultimately toppled the presidency of Richard Nixon.

While the action in SPOTLIGHT is centered in the early 2000s in Boston, the parallels are clear. The film dramatizes the work of real Boston Globe journalists unearthing a story with global implications, it’s visceral and it’s done really well.

SPOTLIGHT takes its name from a feature of the Boston Globe newspaper, a series of columns spotlighting a particular subject: a case of corruption, a single crime, etc. When the Globe gets a new editor, Marty Baron (Liev Schreiber), everyone in the newsroom fears for their jobs. Marty, however, is interested in what he sees as the potential of the Spotlight team, especially when eager reporters Mike Rezendes (Mark Ruffalo) and Sacha Pfeiffer (Rachel McAdams) think there may be more to an already disturbing story about the local Catholic diocese settling out of court with the family of a child who was sexually abused by a priest.

By now, especially because the situation has happened in epidemic proportions in some version pretty much all over the world (at the end, SPOTLIGHT puts up an epically long scroll of every city in every country where this kind of abuse is known to have happened), many viewers will have an idea of where this is going, even without previous awareness of the specifics of the Boston Globe investigation. Director Tom McCarthy and his co-writer Josh Singer, basing their film in part on the nonfiction book BETRAYAL: THE CRISIS IN THE CATHOLIC CHURCH, manage to make everything feel intense and suspenseful as the Spotlight team uncover layers of cover-up and legal deck-shuffling that are awesome in scope and might be darkly hilarious except for the trauma that underlies it all. The reporters also face pushback from colleagues who simply don’t want to believe that the Church, an institution they trust entirely, could be party to any of this.

One of the things SPOTLIGHT does well is actually explore, in a way that makes sense to non-Catholics, how betrayal by a priest (rather than any other person, in or out of a position of authority) carries a double blow for believers. When some now-adult survivors talk about what it meant to them as children to be violated by someone who was literally meant to intercede for them with God, there is a sense of perspective and the ongoing doubt and heartbreak of shattered trust that other fictionalized screen accounts like this often lack.

There is a startling scene with McAdams as Pfeiffer and an elderly former priest, played by Richard O’Rourke, which hints at an answer to the question of “why” the way was paved for these events. SPOTLIGHT’s makers are responsible in not trying to provide a more definitive explanation when one doesn’t exist, but the absence makes itself felt as we witness the film’s events.

The cast is perfect from leads to cameos. Ruffalo, McAdams and Brian D’Arcy James all have determination, grit and exhaustion coming off them in waves, and we don’t doubt the effectiveness and ferocity of their newsroom boss, played by Michael Keaton. Schreiber portrays Baron with a becoming softness and wit, and John Slattery as publisher Ben Bradlee Jr. gives us a man shaken to his core. Jamey Sheridan and Billy Crudup are very persuasive as lawyers tasked with covering up the scandal and Stanley Tucci goes from apparent eccentricity to on-point tenderness with ease as Mitch Garabedian, an attorney protective of the families he represents.

SPOTLIGHT works as a legal thriller, a newspaper drama, an examination of values we take for granted and of how people survive profound damage. It is, as they say, the full package.