Home » GHOST OF THE ROBOT interview 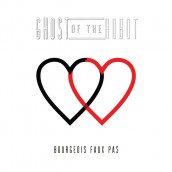 Making the songs, collaboration and the impact of the Internet

In Part 3 of our exclusive interview with the band Ghost of the Robot – Charlie De Mars, James Marsters, Sullivan Marsters and Kevin McPherson – they talk more about their new album BOURGEOIS FAUX PAS, collaboration, the impact of the Internet on the modern music industry and more.

AX: When you present songs to each other to work on, do you ever ask each other, “What are you actually trying to say here?” or do you just go with your interpretation of it and think, “What would be fun to do with this?”

CHARLIE DE MARS: I think we have a dialogue of understanding, so we’re all on the same page. At least, I know Sullivan and I have had conversations about meanings and things like that, so …

KEVIN McPHERSON: I usually just go with my own interpretation of what they mean. I don’t like asking somebody who wrote a song what they’re trying to say, because it should be apparent. Maybe not what they are trying to say, but what it means to me, and I know that’s the way it’s going to be for the listener, so I’d rather just ride that myself and see what I can give within that perspective.

JAMES MARSTERS: Yeah, when Charlie listens to my song, he’s listening to, hopefully, the expression of my deeper voices, the ones that I’m not aware of, the ones that are not intellectual. And hopefully, he responds to that with his deep voices, without thinking about it too much, and just letting himself instinctively respond to it. I think that if you talk about it, you can short-circuit that situation, and you can get an intellectual response to an instinctual expression. My experience is that I give these songs to the band and this organic process happens, and they end up adding the perfect thing to it, and I don’t feel like it’s been taken off of its axis or its center of gravity. I don’t think it’s changed into something that I didn’t intend; I feel like it flowers and blossoms into what I wanted the whole time. That’s happened consistently ever since the beginning of the band and it’s one of my favorite things of being with these people.

AX: Do you have a preference for studio recording, or live performance?

JAMES MARSTERS: They’re so different. I love both. I love the danger of live performance, I love the fact that when you’re performing live, there’s so much sound going on. The drums are so enormously loud, and so the bass has to match that sound, and then the guitars have to match that sound. When you’re out in the audience, it’s all mixed so that it’s nice, but when you’re on stage, it’s not mixed for you, and it’s a cacophony of chaos. It’s like a fog of war. It’s destabilizing. Sometimes, especially when you’re sound-checking, you’re like, “Where am I?” And to try to fight through that and find each other is exciting and scary. And then, on top of that, something huge always goes wrong. A monitor drops out, strings break, something catches on fire literally, a fan will jump the stage and there might be someone who wants to beat you up or something, so it is inherently super-dangerous [laughs]. And so for me, it’s really fun.

When we record, we pretty much camp out and sleep in the recording studio, and so it’s kind of like summer camp. We’re all just together and we can just sit back and really fine-tune the sound and make it kind of sparkle.

KEVIN McPHERSON: The studio, everything is under a microscope, every word you say, every second of music is just very carefully placed and thought-out. When you get to play live, it’s a celebration of all the work and labor that you’ve put in in the studio. It’s never going to sound like the record – some things will sound better, some things are more authentic, some things will sound less perfect, and that’s also cool in some way. But it’s where everyone comes together and says, “Cool. We’re all now in the same room, let’s appreciate everything about this.”

SULLIVAN MARSTERS: Yeah. I can’t pick, because they’re too different. But live, I’d much rather play way quieter. Playing in a huge, loud rock band can be frustrating, at least for me, because I can’t hear anything and I end up losing everything I know about music and just strumming everything really hard [laughs], and there are no dynamics, there’s no thoughtfulness to it, and you’re just trying to be heard, trying to hear yourself, and it seems like a battle. Rather than if we just took the volume down a couple notches. [addressing his bandmates] To all of us, we should all do that. Take the volume down a little bit, we could all hear each other, interact with each other a bit more.

CHARLIE DE MARS: I agree. Playing live, you can’t hear yourself. It’s like playing deaf. One thing I like about the studio is, you can have a few times to remember the song. When you play live, I’m remembering the chord I have to play right before I have to play it. If we could do the set and then play it again, and play it twice in a row, that usually helps. We don’t play enough. We need to play more live. And record more.

AX: You’re selling your album on GhostoftheRobot.com and on iTunes. Do you feel like the way music works on the Internet now has leveled the playing field at all, or made it harder?

JAMES MARSTERS: I feel like the music industry, because of the digital revolution, is moving away from the power of the record companies, and the power is coming more into bands that can self-produce and market themselves and get their own message out there. We kind of started when the record companies were still firmly in the driver’s seat, but we eschewed them and turned our backs on a couple of record deals and just wanted to do it our own way. The world is coming our way now, but we are quite comfortable in that new world, because we’ve been trying to live in it since we got together.

KEVIN McPHERSON: We’re able to distribute instantly and whereas traditional record deals were a lump sum given to you in quarterly royalty statements or record advances, this is sort of like an ongoing river of nickels.

KEVIN McPHERSON: Fractions of fractions of pennies. But we’re obviously able to take advantage of a tremendous amount of technology and outreach and communication with fans, potential fans, different business partners we want to work with in ways that were never possible before this time.

CHARLIE DE MARS: Yeah. I think that it has definitely helped a lot of bands get heard on the platform of the Internet, but at the same time we’ve been able to do it, everybody else has, too, so there’s just a ton. And the average music listener usually looks towards a band that is part of an established record label to listen to it as a quality filter. And so I don’t know – yes, it’s good in some ways, but at the same time, you still do need to work very hard to be heard, because the Internet’s swarmed. There are so many bands out there – everybody’s in a band. Everybody’s in several bands [laughs].

AX: So the Internet has created a more level playing field, but also a much more crowded one?

CHARLIE DE MARS: Yes. And still not level in my mind.

JAMES MARSTERS: I think the question becomes, who are the gatekeepers? It used to be that the record company was the gatekeeper between the artist and the audience. That has been to a large extent taken away now, and I’ve always thought that the new gatekeepers have to be the journalists. There have to be trusted voices who can tell people, “Hey, I just checked this out, and this is something that you might want to check out yourselves,” so that the audience doesn’t get inundated with too much too much mediocre music, and [so that] music that might be a little better gets lost in the flood. But I am always in favor of artists having more power. My favorite movies are that way, my favorite music is that way, and I think we’re at a point where a band like ours can not have the backing of a corporation and we can do our own advertising, we can do our own merchandising, we can do our own sales through iTunes and we can do our own touring, and what that means is that when we choose the songs on an album, we can really choose the ones that we want, as opposed to having a business person say, “You need these songs to make more money.” We want to make enough money to make more music, but we’re really in love with doing the thing. We’re in love with making the music, and I think we’re doing music that I appreciate more that way.

AX: With social media, is there one element that’s more effective than others?

SULLIVAN MARSTERS: The most effective thing for social media? Be nineteen.

JAMES MARSTERS: We’re a little bit naughty and irreverent, and we’re not afraid of looking stupid, which I think is important.

SULLIVAN MARSTERS: And I think that humor is the best way to interact with people on the Internet, is through humor. It’s the most entertaining, and you need that when it’s just text.

AX: What are some of the highlights on BOURGEOIS FAUX PAS?

JAMES MARSTERS: You’ve got to listen to it [laughs]. See, now I’ve got to intellectualize what we did. My highlights are listening to Charlie’s voice come out on lead, Sullivan’s voice come out on lead, and frankly, me finally listening to my vocals and going, “Yeah, I’m comfortable with that.” I have never felt that before. And so I think vocally, we’re at a much higher level. I think our harmonies are really good, I think that we came into a lot more harmonization on the last album, but I think we found a balance that I find is more organic on this album, but still sweetens it really well. And I think the expression of love that we always try to have as the primary message of the band is a more healthy love, and not so bitter [laughs].

CHARLIE DE MARS: Like our albums in the past, this is just a moment in time. It’s what we’ve been through the past couple years, and how we’ve grown in that time, as musicians, as people. I’m excited about it because it’s a time capsule. Our fans have enabled us to make another moment-in-time document of how we’re playing, how we’re feeling and what we’re doing, which is a real treat, always.

KEVIN McPHERSON: The most important thing we want the fans to hear is that we love them and thank them for allowing us to do this stuff, because they’re some of the greatest people we’ve ever known.