Secret in their Secrets movie review 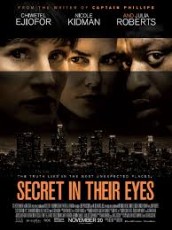 Movie Review: SECRET IN THEIR EYES 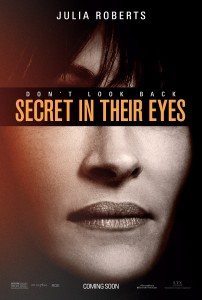 The 2009 Argentinean film EL SECRETO DEL SUS OJOS was well-reviewed and well-respected. Now an English-language adaptation by director/screenwriter Billy Ray, SECRET IN THEIR EYES, is here, and something seems to have been lost in translation. A lot of key plot points are the same, but whether it’s due to cultural differences or the specific presentation here, the secret lacks impact.

SECRET moves back and forth in time from 2002 to the present. Back in 2002, FBI Agent Ray Kasten is on loan to the Los Angeles District Attorney’s counter-terrorism task force. With 9/11 in the very recent past, surveillance of a local mosque is of great concern to the group. Then there’s a horrible murder that hits close to home.

In 2015, Ray is back in Los Angeles to reopen the case, convinced he’s located the killer who went free the first time. This is a matter of great consequence to Ray’s former colleague Jess Cobb (Julia Roberts) and to Claire Sloan (Nicole Kidman), who had just been appointed Deputy District Attorney when Ray first came aboard back in 2002. All of their lives were upended by the crime and its original investigation, and now Ray’s insistence on pursuing the killer threatens to do even more damage.

Going back and forth between present and past, we learn the identity of the victim, why several of the characters feel personal guilt for what happened and what went wrong with the first investigation.

Ejiofor is a terrific actor in any role (so far) and Roberts does an excellent job well out of her comfort zone as a woman who is practically a ghost in her own life. However, one of the big plot points is supposed to be unfulfilled longing between Ray and Claire, and Ejiofor and Kidman strike no sparks at all. Indeed, it takes some dialogue rather late in the running time to establish that Ray is supposed to be responding to signals of interest, rather than running on strictly wishful thinking.

Then there’s the backdrop of the counter-terrorism investigation. For understandable reasons, it quickly becomes a secondary matter to Jess and Ray and possibly even Claire. Still, SECRET handles the investigation’s resolution as such an afterthought that we realize, in plot construction terms, it could have been any sort of major case. Perhaps that’s meant to be the point, 9/11 and sending snitches into religious organizations in the hopes of uncovering terrorists makes for a red herring too large to overlook.

Finally, there’s the climactic secret that simply doesn’t pack the intended punch. We’re not led to it in a way that lets us be especially surprised, let alone emotionally affected and/or philosophically stirred.

SECRET IN THEIR EYES boasts an ace supporting cast – Dean Norris, Alfred Molina, Joe Cole, Michael Kelly, Zoe Graham – and some promising clues at the outset. It also has a good feel for Los Angeles. There are certainly good elements here, but they don’t add up to an engaging whole.