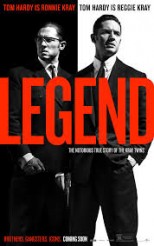 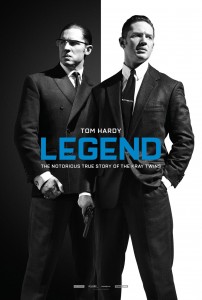 As biographical gangster films go, LEGEND is good enough. This isn’t the first feature to tackle London’s notorious Kray brothers – actual brothers Gary Kemp and Martin Kemp starred in 1990’s THE KRAYS, which had a fairly different take on Ronnie and Reggie, twins from London’s East End who ruled the crime scene there in the 1960s.

LEGEND, adapted by writer/director Brian Helgeland from John Pearson’s nonfiction book THE PROFESSION OF VIOLENCE, stars Tom Hardy as both Reggie and Ronnie. It’s a fairly remarkable piece of work in terms of the actor’s performances and the seamless digital work enabling him to do the many scenes where the brothers are on screen together. It’s easy to forget that it’s the same person inhabiting the two separate personas, which is very much the intention. Here, LEGEND succeeds splendidly.

However, filmmaker Helgeland has opted to the story from the point of view of Reggie’s eventual wife Frances Shea (Emily Browning), who narrates both things she witnessed and things she couldn’t possibly know about. This wouldn’t be an issue (or at least, it would be another kind of issue) if Frances were more perceptive, but because she’s so eager to believe the best of Reggie for so long, we start wondering if a) she’s very dense, b) Reggie really managed to keep her away from most of his business so much of the time, or c) he stayed away from the bulk of the insanity.

Ronnie Kray by most accounts was the more volatile of the brothers (to put it mildly). Where Reggie can pass as an up-and-coming businessman, Ronnie is a unique character, given to fits of sibling possessiveness, violent rage and strange philosophical observations. He’s also ferociously paranoid, sensible in the gangster world to an extent, but dangerous when taken to extremes.

LEGEND isn’t intended as a documentary, but it doesn’t use its dramatic license to provide either resonant insights or a plotline that generates suspense. It’s a shame, because some of the factual details we get in glancing fashion have enormous potential. At one point, Ronnie manages to embroil members of both sides of the House of Lords in an epic scandal. This seems fairly incongruous, but really happened. Since the film doesn’t want to present Ronnie as canny enough to have deliberately engineered this, it plays as a sort of lucky, weird coincidence that isn’t even mined for all the humor such a thing could yield.

The period look of the Swinging Sixties in London is delightful – kudos to production designer Tom Conroy and costume designer Caroline Harris – providing visual reasons to see the film.

Browning is captivating; we can see why the film’s Reggie is so enchanted with her. David Thewlis has a lot of wit as the Kray brothers’ legal fixer and Christopher Eccleston, though underused, has weary righteousness as the police detective who is forever on the case.

It’s mostly Hardy’s movie, though. His Reggie is charming at times, raging at others, always watchable, but someone we’ve seen. Ronnie is a real original, solemn, pensive, oddly open in some respects, perennially ready to take offense and push any situation into a war zone and apparently unbothered by any notion of consequences. We’re never sure what Ronnie is going to do, and he doesn’t seem sure either. It’s a great characterization.

These are the pros and cons of LEGEND. Tom Hardy fans and Sixties aficionados should be pleased, but those seeking a really engrossing gangster story should continue the search.