©2015 Crackle
Cary Elwes in THE ART OF MORE
Interviews

The actors talk about their new series for Crackle 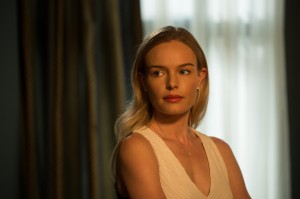 The Crackle streaming service debuts its first one-hour drama THE ART OF MORE today, making the entire ten-hour first season available for those inclined to binge-watch. Created by Chuck Rose, MORE is a thriller set in the high-end art world, where ex-soldier and smuggler Graham Connor (Christian Cooke) maneuvers his way in as an obtainer of rare objects for wealthy collector Arthur Davenport, played by Cary Elwes. Roxanna Whitman, played by Kate Bosworth, is Graham’s opposite number, a wealthy young woman who works for real estate tycoon Samuel Brukner (Dennis Quaid, who is also one of the series’ executive producers).

The London-born Elwes indelibly played Westley in THE PRINCESS BRIDE, an experience he chronicled in his recent book AS YOU WISH. Other notable credits include THE X-FILES, the original SAW, PSYCH and COSMOS.

Bosworth, a Los Angeles native, made her film debut in THE HORSE WHISPERER and subsequently starred as the surfer heroine in BLUE CRUSH, as Sandra Dee in BEYOND THE SEA and as Lois Lane in SUPERMAN RETURNS.

Bosworth and Elwes sat down together for a joint interview about their work in THE ART OF MORE.

ASSIGNMENT X: Do you see your characters are more passionate about the actual art, or about money?

KATE BOSWORTH: [Roxanna] is from money, so I don’t know if it’s so much the money that she’s into. I think she’s passionate about the win. I think ultimately she’s trying to prove herself to her father, who owns DeGraf’s, where she’s an executive, and I think that that really is her driving force is, I want to be the best at what I do. It always comes down to Daddy issues, doesn’t it? [laughs] And I do feel like she is existing in a boys’ club, a woman in a man’s world, and I think that kind of competition within herself is really what drives her most.

CARY ELWES: I think [Arthur] is driven by just passion. I think he’s certainly someone who’s certainly lonely to a degree when we first meet him – he’s a guy who surrounds himself with objects to fill up his life, fill a void – and then he meets Graham, this guy who’s rough around the edges, who’s a veteran from the war in Iraq. [Arthur] becomes a mentor to Graham, because Graham wants to ride the ladder of the auction world and wants my character’s influence to help him achieve his goal. And it ends up being a quid pro quo for them, because my character needs Graham to help sell some of his artwork that has questionable title. And so they need each other. And also, there’s an element of danger to Graham that I think Arthur finds interesting and exciting, but as we know, when a moth gets too close to a flame, sometimes wings get burned. So this is a show about people who have a lot to hide and who want something. They all want something from the other person, they are desperately in need of something that can help fill that void in their life. I describe them all as sort of beautiful pieces of art, that if you look very closely at them, you can see the crack in the veneer.

ELWES: No, I based him on a couple of people I grew up with. It’s funny, I’ve lost my accent over the years, I’m sort of a combination Californian/Englishman right now. So I had to actually think about it before I started [laughs]. And so I picked a couple of personalities I blended together.

BOSWORTH: It’s true that the voice of the character is something that you think of no matter what. I wanted Roxanna’s voice to just sound like money all the time, like coins dropping. I wanted it to feel that, almost a Gatsby-ish character, where it’s so affluent, it’s almost musical in a sense.

AX: Is that something that comes naturally to her, or is her voice a result of her thinking about how she wants it to sound?

BOSWORTH: I think both. I mean, we [Bosworth and Elwes] had a scene together where I feel like they’re so from the same world that it’s like they start singing the same tune, in a sense, with their voices. I think it’s something that, it’s her life, she’s from a very affluent family and a society that’s very affluent. I think that the volume on which that’s turned depends on who she’s with. She’s a very chameleon-like character, very mercurial in that sense, not just in her voice, but in how she interacts with people, to manipulate, to get what she wants from individual people.

AX: Does Arthur see a little bit of himself in Graham?

ELWES: Yeah, sure. No question about it. You’re attracted to people when you meet them because either they represent something you want to have in your own personality, or something that reminds you of yourself. I think there’s an element of both of [those factors] in this relationship. [Graham] is young, he’s a little rough around the edges, he’s from Bensonhurst, so there’s no relationship correlation there. But what Arthur does find interesting about Graham is Graham’s passion, his desire to win at all costs, and I think he recognizes that element in Graham in himself, from when he started out.

AX: Would you say their relationship is mentor/protégé, father/son …?

AX: Arthur is gay. Is he attracted to Graham?

AX: But Arthur does not seem like he’s planning to act on that …

ELWES: No. There’s a mutual respect there. I don’t think he would ever do that.

AX: It seems like Bruckner would like to have a physical relationship with Roxanna, although it’s not clear he’s planning to act on that either …

BOSWORTH: Well, they have a history, Roxanna and Bruckner. I would imagine that he noticed something very different in her, and as she’s trying to prove herself, and people maybe dismissed her, he thought, “No, there’s something there that’s different and quite clever.” So he didn’t underestimate her. So in that sense, he gave her the validation she needed. They probably had a moment of that type of attraction with each other, but there’s a vulnerability that I think they’ve both allowed themselves to show to one another, and so in that sense, there’s a part of one another that they really know. But at this point, even though she might manipulate in a sense, I don’t think she actually sleeps with many people. I think there’s an element of creating this desire that she knows that she can use to her benefit, but I don’t think it’s something that’s beyond that.

AX: Graham is trying to get a job with Brukner, and Roxanna is trying to work with Arthur. Since Arthur doesn’t have physical interest in Roxanna, what does Roxanna think she can offer Arthur that Graham can’t?

BOSWORTH: So what are the other ways of manipulating? I would say trying to expose Graham’s weaknesses. I think that because Roxanna and Arthur have such a history with each other –

ELWES: They all know each other’s flaws.

BOSWORTH: They all know each other’s flaws and so to expose those flaws, and sort of manipulate [the other person’s insecurities] in that sense of saying, for example, “Are you sure that …?”

ELWES: Well, that’s interesting. They all know each other’s flaws, so it’s like a chess game. They could easily go ahead and make a move that could hurt the other person, or damage their career or their future, but they’re all playing nice right now, which is so fun to see in the pilot. They’re all just playing nice, but as the show continues, you’ll see that it gets ramped up a little.

ELWES: We’re all a little desperate.

AX: A lot of the motivation in THE ART OF MORE revolves around the desire to possess art. Do either of you have an object that, if you had infinite wealth, you would want?

BOSWORTH: If I could have anything in the world, one of the top things would be to have my own plane [laughs]. I would love to be able to just get on a plane and go wherever I wanted at any time.

ELWES: That’s hilarious. I second that. If it was an object, a plane would be nice. I own a piece of art that I don’t need, but I like looking at it. I have a Matisse on my wall at home. It’s a print, it’s signed by him, it’s kind of nice. To me, it’s beautiful, I look at it every morning and I smile, knowing that I’m looking at something truly beautiful. So it does evoke some emotion in me. I never get bored with it. So if that’s considered coveting something that’s an object, then yes, I guess you could call it that.

AX: THE ART OF MORE has all its episodes available at once for binge-watching. Do you binge-watch any shows?

BOSWORTH: I know the last thing I binge-watched. This is so random, but it was so good. I really like anything with cooking shows. I really loved CHEF’S TABLE on Netflix. I thought it was fascinating. I love anyone who’s that passionate about what they do and so open with sharing their history of what informs their passion.

ELWES: There are a lot of shows I’m waiting to see. I’m so behind. I have a kid. She takes up a lot of [potential viewing time[ Daddy’s like a TV set at home, entertains twenty-four/seven until she passes out.

AX: To ask a PRINCESS BRIDE question, you wrote AS YOU WISH about that experience. Has that brought you a kind of creative pleasure that is different from acting?

ELWES: Oh, I call it the gift that keeps on giving. It’s definitely giving me the career I enjoy today. I wouldn’t be sitting here talking to you if it weren’t for that film.

AX: What would you both most like people to know about THE ART OF MORE?

ELWES: Okay. Intrigue. It’s fascinating. The characters are well-developed and interesting, and Chuck Rose, the guy who created the show, he didn’t just develop really nuanced characters, he developed characters that work within the storyline. In other words, you can see shows where you can go and watch it and say, “Well, that’s an interesting character, but how does it fit into the plot?” This guy really carefully wove each episode where the character drives the plot and the plot drives the character. There’s nothing arbitrary about it. So I just love it.

BOSWORTH: That’s the kind of material of shows I love watching as well – I do enjoy seeing characters that are fueled by some kind of desperate measure and what kind of choices they make when they’re backed into a corner.

ELWES: They all have secrets.

This interview was conducted during Crackle’s portion of the Television Critics Association summer press tour.