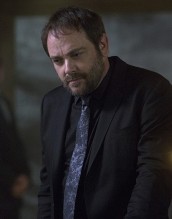 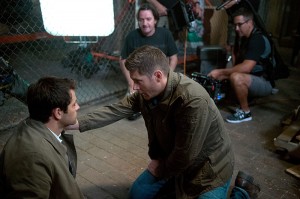 It’s both a good and a bad thing when the best thing in an episode is a scene between two characters we’ve never seen before and may never see again. This is the case in SUPERNATURAL’s Season 11’s “The Bad Seed.” An anonymous angel and a likewise random demon start to face off at a bar and wind up having a drink together. Both of them are trying to figure out what’s setting off alarms in Heaven and Hell, since the big bosses aren’t talking. Perhaps it’s up to the little guys, they muse.

It’s a funny bit that expands the universe a little bit, showing that our heroes aren’t the only ones wondering what needs to be done. Of course, Sam (Jared Padalecki) and Dean (Jensen Ackles, who directed this episode) have their hands full with the cursed, convulsing Castiel (Misha Collins).

Dean can’t get King of Hell Crowley (Mark A. Sheppard) to answer his calls. This is partly because Crowley is greatly occupied with the little girl Amara (Gracyn Shinyei), who is a version of the Darkness (Emily Swallow), the great enemy of God who locked her away before the creation of Earth. Amara is hungry to eat souls, as well as hungry for knowledge. She appreciates her nanny providing a copy of DANTE’S INFERNO, but not so much that she spares the nanny. Amara sees her future adult self in the mirror and they confer. Child Amara tells Crowley she wants protection from “Him” – that is, God – and Crowley assures her he can provide it.

Crowley and child Amara have a philosophical chat. At first, Crowley thinks Amara wants a world of pure evil. Amara asks Crowley if he’d really enjoy this. When Crowley thinks about it, he realizes there wouldn’t be much satisfaction if everyone was already as bad as they could be – his joy comes from corrupting souls. Amara muses that since life is so hard, and then people die, she can’t understand why anyone would want to live in it in the first place. She also thinks Crowley doesn’t see the big picture, though she doesn’t enlighten him on what that is. Left alone for a bit, she eats a second nanny’s soul and then becomes a teenager (Yasmeene Lily-Elle Ball).

Things are so desperate that Sam wonders if they ought to try tracking down Metatron, the treacherous and on-the-loose erstwhile scribe of God. Dean quashes this idea. Eventually, they find Rowena (Ruth Connell), who cursed Castiel in the first place. Rowena cheerfully tells Dean that Sam made a deal with her to remove the Mark of Cain from Dean’s arm (which is what released the Darkness) in exchange for Sam killing Crowley (which he wasn’t able to accomplish). Rowena has the ancient Codex of spells with her, which the Winchesters take off her hands. The boys then force Rowena to remove the curse from Castiel (as he’s in the middle of beating the crap out of Dean), but she manages to escape – and she still has the Book of the Damned in her possession.

So, to briefly recap: Castiel is returned to normal (which he was until three episodes ago), Rowena is on the loose (as she was at the beginning of the episode) and everybody is trying to figure out exactly what to do about the Darkness (which they’ve been doing since the beginning of the season). It all moves along smoothly and entertainingly, but the best bits are the Crowley/Amara talk and the aforementioned angel/demon sequence. It’s solid but mostly unmemorable.