The actor talks playing the adopted son of a criminal dynasty 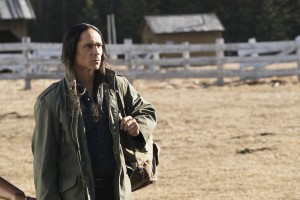 In Season 2 of FX Network’s FARGO, Mondays at 10 PM, Zahn McClarnon plays Hanzee Dent, who has all of the responsibilities and none of the advantages of being an adopted son of the Gerhardt criminal family.

FARGO is adapted for television by Noah Hawley, based on the film of the same name, takes the general concept and atmosphere of the 1996 feature film, but has different characters, different eras and different plots for each season. This season, we’re in 1979 Sioux Falls, South Dakota, and Luverne, Minnesota, where the Gerhardts are clashing with a mob from Kansas City, Missouri, and everyone is unknowingly affected by a hit and run committed by amoral Peggy Blomquist, played by Kirsten Dunst.

McClarnon has been a professional actor since 1992. Recent credits include regular and recurring characters on RINGER, THE RED ROAD and as Officer Mathias in the contemporary Western series LONGMIRE, which premiered its fourth season on Netflix. He also costars in the horror Western BONE TOMAHAWK.

ASSIGNMENT X: What are Hanzee’s feelings toward the Gerhardt family?

ZAHN McCLARNON: Well, that’s the thing. As you’ll see as the series progresses, I can’t really give it away, what happens, but he changes quite a bit. It’s his only family he’s ever had. He was adopted when he was nine years old. I don’t think he remembers much of his previous family, and if he did, I think it was probably bad memories.

I mean, back in the Fifties [when Hanzee was a child], I forget the exact term, but basically what they did is, the government came in and they took the Native [American] kids off the reservations to “civilize” them and put them into boarding schools. And there’s a whole generation, like my grandfather and my grandmother, who went through those boarding schools and were affected by those boarding schools. They were run by missionaries and priests, and they were affected hugely by cutting the hair off, no speaking your language, and I think in the Sixties and Seventies, it was still happening, where a lot of native families were just giving up their kids, because of alcoholism, addiction and hoping to give them a better life. But I don’t think they knew what they were doing with Hanzee, my character. Because he goes into a pretty dysfunctional family.

AX: Did you had to learn anything to play part of the Gerhardt criminal enterprise?

McCLARNON: I think the main thing that I had to learn was being completely emotionless, pretty much. He’s pretty stone cold. He doesn’t do a lot – there’s not a lot going on. That can be tough to do sometimes, because for actors, we want to act. To be still – I’ve never had to be that still in my life. In the first scene, Noah said to me on the first day, “Still. Stillness.” Still’s kind of difficult to do. It’s harder than you think it would be.

AX: Did you have to learn anything as far as the gangster parts, with guns or any of that?

McCLARNON: No. I had to learn how to handle an automatic rifle a little better than I do, which didn’t take very long. I grew up shooting guns and stuff like that. You’ll see in the show that my weapon of choice is an automatic weapon.

AX: With Bokeem Woodbine, for example, they really changed his look so that he was very Seventies. Do you really change your look for Hanzee?

McCLARNON: No, not really. I always have long hair. Not really, no. I dress like Hanzee, Hanzee kind of dresses like that, like he’s from the Seventies. He was a Viet Nam vet, so he wore an army jacket.

AX: So you don’t have to wear any embarrassing Seventies polyester wardrobe?

McCLARNON: I have some polyester pants, I do. But they’re not embarrassing. They were the same pants my grandfather used to wear. I remember him wearing. Those are the ones I picked out, because they remind me of him.

AX: Was there anybody on the show you were particularly excited about getting to work with?

McCLARNON: There was not a single person I was not excited about working with. From Jeffrey [Donovan as Dodd Gerhardt] to Bokeem to Kirsten to Angus Sampson [who plays Bear Gerhardt], who was wonderful to work with – I think me and Angus probably hit it off the most. He’s a wonderful man.

McCLARNON: I thought it felt more like a movie, because I was there for all ten episodes, we didn’t get the scripts, we got them a couple weeks before we started shooting, but I watched the arc of the character, and I was there all the time. I wasn’t flying home, I was there in the hotel or on set, so it felt like a long film.

AX: Because you didn’t get the whole thing at once, they didn’t tell you where your character Hanzee was going to wind up?

AX: Were there big things that surprised you?

McCLARNON: Are you kidding me? There were huge surprises. I obviously can’t tell you what they are, but the end of Episode 10, what happens to my character, it blew me away, and it’s going to be a big surprise.

McCLARNON: In my personal opinion, it’s probably the best, the most unique television show on TV today. Watch it, you’re going to love it.

This interview was conducted during FX Network’s party for the Television Critics Association.