The actor talks his mobster character, plus THE BREED and THE NOTORIOUS NINE 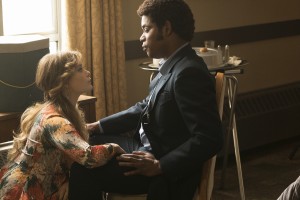 In Season 2 of FX’s FARGO, Mondays at 10 PM, a small-town diner massacre in 1979 is compounded by the accidental hit-and-run killing of a dim-bulb son of a local mob family, who are at odds with a bigger mob from Kansas City.

Woodbine, a native New Yorker, sounds ecstatic about his current gig. “Mike Milligan is a gift from the actor gods. Any actor could have stepped into this role and run away with it. I just happened to be the lucky guy who got the opportunity. It’s easily my favorite role to date.”

ASSIGNMENT X: Had you seen the feature film FARGO, made by Joel and Ethan Coen? The story in the movie has nothing to do with the story in either season of the series, let alone your character, but …

BOKEEM WOODBINE: Yeah, I’m a huge FARGO fan, I’m a FARGO-phile, and I haven’t seen Season 1, but I’m really big about the picture, the film, and I’m just happy to be part of the legacy of FARGO.

AX: Why didn’t you watch the first season of the FARGO series?

WOODBINE: I didn’t watch it on purpose, because I didn’t need the pressure.

AX: Can you talk Mike Milligan as a character?

WOODBINE: Mike Milligan is an opportunist, he’s creative, he’s innovative, he’s got his own idea about the world, and he makes no apologies.

AX: Mike looks something like Samuel L. Jackson’s character from PULP FICTION. Is that intentional, or is that just because of that ‘70s hairstyle?

WOODBINE: Sam Jackson was dynamite in PULP FICTION and kind of a hero of mine. I think it’s two completely different types of characters. And [FARGO TV adapter/show runner] Noah Hawley was very, very cool about letting me have my druthers as far as the wig was concerned. If I didn’t like it, we would have gone with something else. He was very cool about letting me kind of pick it out. But I will say, even more than the hair, it’s the sideburns for me. When the sideburns came on, it’s like I felt like a completely different person, and I’ve never really had the opportunity to play with props or makeup, whatever you would call it, whatever category the wig and the sideburns fall into. I’ve never really had that opportunity to go there, so I’m just grateful to Noah for letting me do my thing. And hopefully the look resonates with people in some way.

AX: Back in 2001, you played a human police officer teamed with a vampire partner in a Starz movie pilot about a time in the future where vampires were part of society. It seems like that was a little ahead of its time in terms of where TV went a few years later. Would you have liked that to go to series?

WOODBINE: Yeah. There’s a rumor that some people might be trying to resurrect it without [Woodbine’s character] Steven Grant as the lead, but I hope it does whatever it’s supposed to do, because Michael Oblowitz, the director and the guy who thought of everything, he’s a really smart cat and I hope it’s successful for his sake, too.

WOODBINE: THE NOTORIOUS NINE, a black Western we’re trying to coproduce and put out within the next year or so. Keep an eye out for it.

AX: Given that each season of FARGO is its own closed-ended story, is it sort of like doing a long film, rather than a TV series?

WOODBINE: Yeah. It’s unfair [to other TV projects], because we have all the resources of a major, major, major motion picture, but we still have the creative spark of an indie, so it’s unfair. We had everything we ever could have wanted or needed.

AX: Would you say that FARGO, as far as viewers go, translates to gritty, quirky crime drama in snow?

WOODBINE: It’s its own thing. We can try to give it whatever moniker that we want, but it’s always going to be FARGO, and that’s going to always be what it is. We’d be fools to give it a sound bite.

This interview was conducted at the Fox/FX Networks party for the Television Critics Association summer press tour.