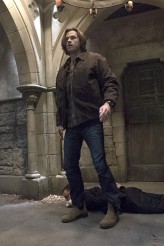 Worth it for the outrageous addition to mythology alone 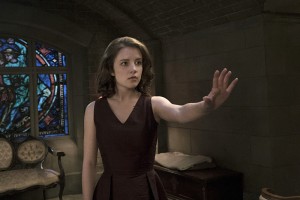 After the relative indecisiveness of the previous SUPERNATURAL Season 11 episode, “Thin Lizzie,” there was no reason to expect anything mythically huge in “Our Little World.” However, it’s as if someone said to the creative staff, “Go big or go home.” Hint: they have not gone home.

“Our Little World” takes on nothing less than Creation and makes the stakes as mighty as they have ever been, which is saying something on a show that treats Heaven and Hell like an destinations on a cross-state express train.

Sam (Jared Padalecki) and Dean (Jensen Ackles) are still in Massachusetts when they hear that Len, the newly-soulless man who admitted to murders he hadn’t committed in order to be safely locked up, has been killed in prison.

The reason for this is that King of Hell Crowley (Mark A. Sheppard) is having his demons clean up after the rapidly-growing Amara (now played as a young woman by Samantha Isler), aka the Darkness. Crowley sequesters Amara, first like a stern parent, then as a more reasonable guardian who promises to protect her in exchange for her giving him some time to figure out exactly what she is.

Dean and Sam decide to go after Amara. Sam isn’t quite sure Dean is up to it, but Dean – who doesn’t remember the Darkness telling him that they’ll never hurt each other – insists that he is. They track Amara and Crowley to an abandoned mental institution.

Meanwhile, there’s the question of exactly what the Darkness is. Castiel (Misha Collins), who has been wallowing in guilt and watching reality television, is roused to action when he catches sight of Metatron (Curtis Armstrong), wily ex-angel, in a bit of news footage. Metatron is now a human “nightcrawler,” a freelance videographer who sells crime footage to the news.

Castiel tracks Metatron down. Metatron, seriously misreading Castiel’s state of mind, says, “You have gone full-on wuss.” Whereupon Castiel gives Metatron an extremely understandable beat-down. Castiel has already found the Demon Tablet that Metatron stole (under Metatron’s mattress) and wants to know about the Darkness. Metatron begs Castiel to kill him. This could be a ploy – with Metatron, it usually is – but we don’t find out, because Castiel refuses to oblige him. Finally, Metatron explains that in order for God to make Creation, he had to betray and sacrifice the only other being he knew – His sister, the Darkness. And … whoa.

Back on somewhat more familiar turf, Sam keeps the demon guards busy, while Dean breaks into Amara’s room. Amara admits she’s fascinated by Dean – he is the embodiment of both the triumph and the folly of His creation. Dean is understandably hesitant to kill what looks like an innocent young woman – and then Crowley zaps him. Crowley points out that he has had to get over his own shame at being unable to kill Dean over the years, but now he feels ready to do so. Then Amara zaps Crowley. She says she no longer needs his protection, but she’ll allow Crowley to live if he returns to Hell and allows Dean safe passage. Crowley doesn’t have much choice.

Sam bursts into the room, Amara magically knocks him away; Dean starts to go for Amara, she likewise magically sends him flying. She tells Dean she has a very old score to settle and leaves.

Sam and Dean and Castiel regroup at the Men of Letters headquarters. Dean can’t believe Cass let Metatron go, even though Cass points out that their old enemy is not only human, but a pretty pathetic specimen at that. Castiel has explained what Metatron told him, and when he expresses surprise that Dean let Amara go, Dean points out – repeatedly – that it’s hard to take down God’s sister. Sam, meanwhile, is wrestling with a secret of his own – he’s been having visions of the cage in Hell where Lucifer (plus the Winchesters’ half-brother, who when last we saw him was possessed by the archangel Michael) is trapped. Nobody’s said the words yet, but Lucifer may be the only one with any ideas of how to stop the Darkness.

So, for those keeping score, simply on its own terms, “Our Little World” is pretty rich, with everybody dealing with their own ethical quandaries, plus Armstrong proving yet again what a fabulous and fearless asset his is to SUPERNATURAL.

On the major mythmaking front, there are certainly tales in pantheistic cultures of gods with relatives, but giving monotheistic big-G God a sister – one he betrayed, no less – is possibly all new. At least, it doesn’t seem to have cropped up on series TV before. Where this may or may not go is unclear, but credit SUPERNATURAL for, once again, proving it has the courage of its own insanity.