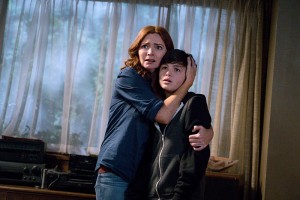 On most shows, not every episode is a masterpiece. Sometimes there are procedural grinders, and so it is with the SUPERNATURAL Season 11 episode “Plush.” Writers Eric Charmelo & Nicole Snyder and director Tim Andrew have devised a forum for some wonderfully creepy imagery that provides the requisite dose of horror, but as far as plots go, this is standard exorcism fare.

Sheriff Donna Hanscum (Briana Buckmaster) summons Sam (Jared Padalecki) and Dean (Jensen Ackles) to Cottage Grove, Minnesota, where something weird has happened. While his wife was taking out the garbage, Stan Hinkle was stabbed to death in his living room by a youth wearing a giant bunny head mask. This in itself wouldn’t seem to be a job for the Winchesters, but the killer – now in jail – has exhibited super-strength, and nobody can get the mask off of him.

While Sam and Dean start making inquiries, Donna and her deputy, Doug (Brendan Taylor), try to transfer the young man to a hospital to get the mask removed. The young man breaks free and tries to kill Donna, whereupon Doug shoots him to death. The mask falls off.

Then a school coach is attacked at the gym by someone wearing a jester costume and mask. The jester is tackled and arrested. This time, Sam and Dean deduce the mask isn’t a cursed object and that instead it is allowing an angry ghost to possess the wearer. Dean shoots rock salt at the “jester,” which causes the ghost to move on. The young woman in the costume has no idea of anything that happened since she put on the mask.

The costumes and masks were the property of the now-deceased Chester Johnson (Adrian Glynn McMorran). Chester’s sister Rita (Brigid Brannagh) tells the Winchesters that Chester was a children’s party performer who became depressed and committed suicide. After his death, she donated his costumes to various schools and thrift shops. Donna and her deputy start rounding up the cursed clothing.

After the coach is murdered in the hospital, Sam and Dean finally get the truth out of Rita. Rita says that Stan and the coach had accused Chester of being a child molester. Rita didn’t want to believe it, but was afraid for her own son, Max (Logan Williams). She told the two men where to find Chester; they had planned to frighten him, but accidentally killed him.

Chester’s ghost possesses Max, causing the boy to attack Rita. Sam and Dean get the mask off Max and Sam burns it while Chester’s ghost is trying to throttle Dean. With the last of his possessions gone, Chester’s spirit burns up and goes away.

There’s an attempt to liven things up a little with Donna hesitating to accept the shy advances of her deputy because he’s another cop named Doug (like her awful ex-husband). Having the clown-phobic Sam trapped in an elevator with a killer clown is a good idea, and the masks designs are appropriately disturbing.

There is also some discussion between Sam and Dean about the fact that Sam is praying to God, which Dean finds preposterous, since God hasn’t shown up through any of the giant catastrophes they’ve faced so far. Sam counters that this time may be different, as the Darkness is God’s sister.

Sam is worried that God, or whoever, is sending Sam visions of the cage in Hell where Lucifer is locked up because that’s where the answers are. Dean says there is no way that Sam is going back to the cage, so guess what will happen later this season.

The dialogue furthering the seasonal plot arc is interesting, but could go on no matter what else was occurring in the episode. The main thing keeping “Plush” from being fluff is that care has been taken to make the costumes and even the blood spatter actually unnerving and scary, qualities that sometimes get lost in the more heavily-plotted episodes.