The series co-creators talk about their satirical slasher sorority series 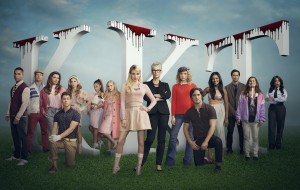 SCREAM QUEENS, which has its two-huor first-season finale Tuesday at 8 PM on Fox Network, is brought to you by Ryan Murphy, Brad Falchuk and Ian Brennan, the same creative team behind GLEE. Unlike Falchuk and Murphy’s relatively serious other joint horror creation, FX’s AMERICAN HORROR STORY, now in its fifth season, SCREAM QUEENS is simultaneously an homage to and send-up of the slasher flick genre.

Set in an upscale university, SCREAM QUEENS conflates the arrival of a devil-masked murderer with the order of the school’s Dean Munch – played by horror-movie icon Jamie Lee Curtis – that the most snobbish sorority on campus open its doors to anyone who wants to pledge.

Falchuk and Brennan, both of whom serve as executive producers and episode directors on SCREAM QUEENS talk about their latest work.

ASSIGNMENT X: Was the idea for SCREAM QUEENS an evolving discussion between the two of you and Rynam Murply, or how did it come about?

BRAD FALCHUK: As GLEE was ending, we always were in conversation about, “What are we going to do next?” Because I think all three of us had such an amazing experience in working together, and we have such a particular alchemy, that we knew we wanted to do something. And then when the idea of a sort of the horror/comedy came up, and once the seed is there of, “What about horror/comedy?”, then it’s all of us really getting into it and yippety-yapping.

IAN BRENNAN: Yeah. And it was very exciting right away. It was one of those ideas where you’re like, “Oh, I can’t believe nobody’s done this yet.” I’m surprised there hasn’t been something of this tone. And it’s GLEE-ish in a sense, sort of, but it’s so different, and it’s been really exciting to dig into.

AX: You’ve said that for every take, you tell a different actor, “Play it like you’re the killer.” Wouldn’t the actors be able to figure out who the killer is by watching which takes you choose in the final edit?

FALCHUK: No, because oftentimes when we’re editing, we’ll use a take to make it seem like they are [the killer]. Because the issue wasn’t to have that happen so that we could put that in in a way that would say, “Oh, I see it’s the killer,” we put it in so everything was weird. Because the reality is, what they don’t know, sometimes when you give them that note is, there’s a secret that’s going to come out two episodes from now that you don’t know, but it’s going to matter in this scene. So I can’t tell you, “Play a secret.” I can tell you, “Play the killer,” and in that moment, they’re going to play something, whatever their version of “something” is, and later, when the secret’s revealed, you can thread that in. Or sometimes you’re like, “It’ll be fun, because this scene’s kind of flat,” and to have someone play like the killer, and when you’re in editing, you can make it that, and then it’s funny.

AX: What can you say about the way sororities and fraternities are depicted in the show?

FALCHUK: To my mind, it’s all part of the stew. The Greek system is like a little Petri dish. I think they’re not inherently good or bad, sororities or fraternities. They’re just little conglomerations of people and it’s watching these people deal with how people navigate social issues. I think that’s why they come up there. It’s all through the lens of the Greek system. And with a wink. We want to do it funny.

AX: Can you talk about Nick Jonas in the show?

FALCHUK: It’s interesting with Nick. What happened was, we were casting in the process and I went to a party, and I met him standing in the kitchen. I met him for a second. You’re like, “I don’t know who this guy is,” but then to meet him, and then I went in the next day with Ryan and Ian and said, “We’ve got to cast Nick Jonas in something. I don’t know what it is, but I think I’m in love with him.” And so we brought him in the next week, and we came in and talked to him, and he came in and did it, and then honestly, like a real professional, he’s an actor, he’s hilarious, he makes choices, he is a delight, a professional, we put him through all kinds of stuff. Again, you think you’re bringing him in because he has some kind of star quality, but then he also has this real timing. He kept up with everybody.

AX: Can you also talk about casting Ariana Grande?

FALCHUK: People like that, you think, “Oh, it’s a stunt.” Then they get there and she’s incredibly professional, incredibly funny, everyone loved her, really sweet, and a huge horror fan. I mean, I was shooting stuff with her that was like, “You’re sure you’re okay with us doing this?” in terms of challenging someone physically, and she’s like, “I love it, I love it, I love it.” Also, I found her to be a real delight, and really professional.

AX: The moral in a lot of the Jamie Lee Curtis 1970s/1980s horror movies seemed to be, “We don’t care if you’re a masked immortal killer, do not mess with Jamie Lee Curtis.” Is that one of the morals here?

BRENNAN: I think in life that’s a moral. And I’m not kidding. Don’t fuck with that lady. She’s serious business.

BRENNAN: She’s no nonsense. She does not suffer fools. She’s great. From Moment One, she’s one hundred percent authentic the whole time. She’s such a great person to have sort of at the helm of the show. She’s a really good presence to be around.

AX: Beyond simply the fact of her presence in the show, are you going to have any onscreen references to Jamie Lee Curtis’ horror movie past.

FALCHUK: I think it would be not smart not to.

AX: If this goes for another season, would the survivors be playing the same characters just dealing with another murderer, or is this going to be an anthology like AMERICAN HORROR STORY?

FALCHUK: We won’t say. We have a plan.

AX: With the three of you, do you any of you find that there are particular types of scenes that one of you likes the most?

FALCHUK: I always say, there were times in GLEE when Ian and I both thought we were writing a scene and we both wrote it, and you looked at them and they were totally different, and they were both great. And in that situation, I would say, “Use Ian’s, because it’s probably better,” but in general, I think it’s not better or worse, it’s just, this is the Brad version, this is the Ryan version, this is Ian version. They’re all awesome, they’re just different, but you put them all together and they all seem to work in some way.

FALCHUK: No, no. I mean, I think you can always feel a scene that maybe one of us will write a little bit better – not better, a little bit more like we want it to feel – but also, you don’t know when you go away to write what it’s going to be. And so it’s really like, this is kind of what the story is, go create it. And the way we write, we go write and that’s it. We go for it. It’s not like there’s a lot of rewriting at that point.

AX: What would you most like people to know about SCREAM QUEENS?

This interview was conducted during Fox Network’s portion of the Television Critics Association press tour.