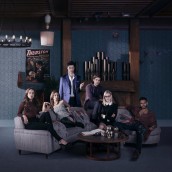 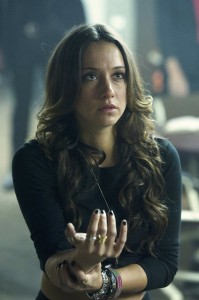 In Syfy’s new Monday night series THE MAGICIANS, based on the trilogy of novels by Lev Grossman, magic is real. Some, like Quentin Coldwater (Jason Ralph), study the magical arts at Brakebills University, while others, like Quentin’s lifelong friend Julia (Stella Maeve), learn more dangerously on the street.

Magic may help explain how John McNamara, who adapted THE MAGICIANS for television with fellow executive producer Sera Gamble, is working out his schedule. McNamara is also executive-producing NBC’s Sixties-era crime drama AQUARIUS, starring David Duchovny, which will be airing its second season later this year, and discussing the Fifties/Sixties Hollywood blacklist film TRUMBO, which McNamara wrote and produced (and which has earned an Oscar nomination for leading man Bryan Cranston).

ASSIGNMENT X: Since AQUARIUS has been picked up for a second season, are you having to readjust your schedule?

JOHN McNAMARA: No. We were doing MAGICIANS. I was doing TRUMBO and AQUARIUS, and I did the pilot of MAGICIANS during AQUARIUS, so it’s been a busy couple years. It’s all good.

AX: TRUMBO and AQUARIUS are set in the late Fifties and Sixties. Was one of the appeals of THE MAGICIANS that it takes place in the present?

McNAMARA: Yeah, probably. Not consciously. It seems like having a fun way to try something new and writing characters who are way younger than me.

AX: What is the division of responsibilities between you and Sera Gamble as show runners?

McNAMARA: We sort of divide it up. We’re always in the writers’ room together, working on story with the other writers, and then one of us will peel off and do a script, or one of us will supervise another writer doing a script.

AX: Your script for TRUMBO deals heavily with coercion, censorship and intimidation. Are any of those themes explored in THE MAGICIANS?

McNAMARA: One of the main themes with TRUMBO is, it’s very hard to be yourself, because other people always try to tell you what to do or who to be. And that theme runs through THE MAGICIANS – how do you be the best version of yourself?

McNAMARA: Yeah, it is fun. You revisit your own youth a little bit, but you also then hear things in a whole new way, in a whole new perspective, from actual young people.

AX: Did you have to do any research into twenty-something sarcasm of the present?

McNAMARA: I wouldn’t call it research, I just like to listen. I just would listen a lot. Sometimes I’ll just hear something that I think is great. Like “Get off my jock” is a new phrase I think is really funny, and I liked that and we wove it into a script at one point, so yeah. Listen, always listen. Always eavesdrop.

AX: Do you have a favorite type of magic that’s been introduced to you through THE MAGICIANS?

McNAMARA: I wouldn’t say it’s through the show – I like seeing really good cards sleight-of-hand. And Jason’s gotten very, very good. It’s fun to watch him do it, to watch him grow.

AX: Without being too spoilery, can you talk about the other realms explored in THE MAGICIANS?

McNAMARA: The only thing I can say is that there are other worlds, and we will be seeing them.

AX: Do you always depict things on the show way Lev Grossman described them in the books?

McNAMARA: No. Sometimes it’s impractical, and sometimes even sometimes Lev will say, “You know, I described it as this, but I hate that now, I want to change it.” Which is really fun.

AX: Are you learning anything with THE MAGICIANS visual effects team?

McNAMARA: I learn the same lesson over and over again – that when you think the effects are easy, they’re actually really hard, and sometimes when you think they’re hard, they’re super-easy. You never know. It’s a very unpredictable, for me anyway, kind of experience. I’m always re-learning, over and over again, how visual effects sometimes you think, “Oh, my God, that’s going to be so simple.” Like a moth. That ended up being so complicated. I was shocked.

AX: Can you tease anything about Season 2 of AQUARIUS?

McNAMARA: Same time period, picks up about thirty seconds after the end of the season finale, and takes us all the way to the Tate murders.

AX: Any cast crossover between THE MAGICIANS and AQUARIUS?

McNAMARA: Yes. Jason Ralph was in Season 1 of AQUARIUS. I think he’s going to come back. I’m hoping that maybe we’ll get Olivia Taylor Dudley to do a guest shot. Jay Taylor, who is recurring on MAGICIANS, is on AQUARIUS, and Spencer Garrett, who’s on AQUARIUS, is going to have a two-part arc, a two-episode arc.

AX: Will we be seeing more of Kacey Rohl, who plays Julia’s possible mentor, on THE MAGICIANS?

AX: In THE MAGICIANS, Quentin is obsessed with a magical realm called Fillory, which he read about in supposedly fictional books when he was a child. He desperately wants to visit this place he read about. Do you have something that was Fillory to you when you were growing up?

AX: So you would have liked to visit the Enterprise?

AX: What would you most like people to know about MAGICIANS?

McNAMARA: Just watch it, just watch it and if you like it keep watching it.

This interview was conducted during Syfy’s portion of the January 2016 Television Critics Association press tour.

DANCING WITH THE STARS Recap: Sugar Ray knocked out of the Season 12 c...
CD Review: A LONELY PLACE TO DIE
Interview: Eva Longoria on the end of DESPERATE HOUSEWIVES
Blu-ray review: FINAL EXAM