The actor talks working with swords and more 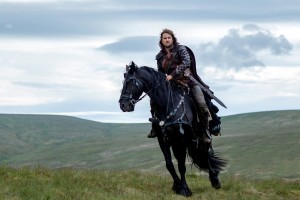 There are actors who have to learn how to use a sword once they get a role in a heroic fantasy. Then there’s Kieran Bew, who was a British sword cadet champion in his teens before he ever became an actor.

Not all of Bew’s film and television work has called for work with bladed weaponry. His resume includes the features GREEN STREET HOOLIGANS and AVP: ALIEN VS. PREDATOR and the British TV series THE BILL, SILENT WITNESS, WPC 56 and THE BLETCHLEY CIRCLE. Then again, the English actor has also appeared in the 2008 TV CRUSOE and in the Renaissance-era Starz drama DA VINCI’S DEMONS, both of which had swashbuckling.

Now Bew is starring as legendary Scandinavian hero Beowulf in Esquire Network’s BEOWULF: RETURN TO THE SHIELDLANDS, in its first season on Saturday nights. Long gone from his childhood home of Hierot, Beowulf comes back to find the castle beset by political intrigue within and monsters without as he grapples with his own identity.

ASSIGNMENT X: When you were growing up, did you have a particular hero that you wanted to be?

KIERAN BEW: Well, yeah, I wanted to be in the Three Musketeers, particularly. I got this very haunting image of Oliver Reed stuck on a water wheel, sword-fighting from the famous movie, in my head, and I wanted to be a Highlander and a Jedi and all the other things that you watch when you’re growing up.

BEW: Yeah, of course. And all those classic movies. It’s such a pleasure to do this as a job now.

AX: You were a sword champion before you were an actor. Where did you compete?

BEW: I was a British cadet champion when I was sixteen, seventeen, and I fought for my country all over Europe.

AX: So are you enjoying helping your fellow actors with their sword choreography?

BEW: Sure. I help out when it’s necessary. It’s not something that’s thrust on me [laughs]. We have a fantastic stunt department who I’d worked with on previous shows as well, and they come up with super stuff, but we have to adapt. We film it fast and we have to make changes, depending on terrain and particular actors as well. And it’s always a pleasure. I’ve been choreographing fights since I was eighteen.

AX: Do you enjoy choreographing the swordfights more, or do you enjoy being in them more?

BEW: I think both, really. I mean, for me, the important thing is that the choreography is narratively driven and it’s witty and it’s exciting and that people understand what they’re watching, so you’re not just watching an action sequence, you’re watching an extension of the story. And for me, that’s a real art, which I was taught at drama school, at LAMDA [London Academy of Music and Dramatic Art], and it’s a big passion of mine.

AX: Given that you grew up watching the Richard Lester MUSKETEERS films, have you asked the BEOWULF people to work in any sword fights that are sort of comic, where something unexpected is happening?

BEW: [laughs] Yeah. Well, there’s always a wit that I want to add to the fights, and the unexpected. But also, there’s the tension. It’s most important that the audience really understands the level of danger when they’re watching, that there’s a risk involved. And nobody’s shown that better probably than Ridley Scott in his great movie THE DUELLISTS, and in so many other great films as well.

AX: In addition to physically fighting with monsters and marauders, Beowulf has a very awkward relationship with Slean, the prince played by Ed Speleers. Slean is obviously pretty jealous and nervous about Beowulf, but what is Beowulf’s attitude toward Slean? Does he have any respect for him as the prince, or does Beowulf feel like, “I know you’re a jerk, you’ve always been a jerk …”?

BEW: I don’t think it’s as simple as that. I think Beowulf is bemused, actually, and a little bit incredulous that Slean has such a resentment for him. Really, all Beowulf wants is to go home and be accepted and actually stop. It’s very difficult being famous and infamous, whichever way you look at the fame that Beowulf’s had since he was a kid, and actually, he just wants to stop. And Slean constantly bringing up this resentment is irritating.

AX: What would you most like people to know about BEOWULF: RETURN TO THE SHIELDLANDS?

BEW: I’d like people to know that it’s a fantasy/adventure show, which is made for a broad audience, and it’s going to grow into something huge. [Season 1] is thirteen episodes and it’s just the beginning.

This interview was conducted at Esquire Network’s portion of the January Television Critics Association press tour.