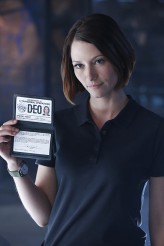 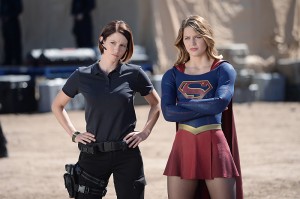 In CBS’ DC Comics TV adaptation SUPERGIRL, now in its first season Mondays at 8 PM, Chyler Leigh plays Alex Danvers. Alex’s parents adopted Supergirl, aka Kara Danvers (Melissa Benoist), when she was newly arrived from Krypton. This means that Alex and Kara have grown up as sisters, with all the loyalty and over-sensitivity that often accompanies a sibling relationship. Alex at first didn’t want Kara to reveal her powers to the world. For her part, Kara was furious when she learned that Alex was an operative for the Department of Extranormal Operations, or DEO, a secret government agency that monitors and often imprisons hostile extraterrestrials.

The DEO definitely has a cool base of operations, with cave walls and all sorts of active workstations and paraphernalia, as reporters discover when CBS opens up the set for a visit during the Television Critics Association press tour.

Leigh, a native of North Carolina, is perhaps best known for her role on GREY’S ANATOMY as Lexie Grey, another sister to the lead character (in that case, Ellen Pompeo’s Meredith Grey). During the set visit and another CBS event, Leigh talks about playing sister to a superhero, with some human but still special abilities of her own.

AX: Do you see any similarities between your character Lexie on GREY’S ANATOMY and Alex on SUPERGIRL?

CHYLER LEIGH: So Lexie was killed in the plane crash, and then in the [SUPERGIRL] pilot episode, Alex is saved on a plane, thank God. And there’s a lot of comparisons. Both characters are Alexandra. So that’s kind of cool. So I do get a lot of references, but I feel like I get an opportunity to do another Alex justice.

AX: You now have a day job in which you track down dangerous extraterrestrials. Have you always wanted to play a serious badass?

LEIGH: Oh, yeah, of course. A lot of the stuff that I’ve been doing until this job has been the quirky role, almost like the Kara [at the office] role. And so for me to be able to come in and do this kind of stuff, it is really cool. It is a lot of fun.

AX: Have you had to learn anything as far as handling weaponry, or fighting?

LEIGH: Yes. There was a day that I was doing fitness training, actual working-out training, and stunt-coordinated fighting, and weapons, all in the same day. That was a really, really fun day. We have been going through weapons and all that.

AX: At the beginning of the series, Kara sees it as a betrayal that Alex is working for the DEO without telling her. How did you feel about that when you were playing it?

LEIGH: Well, you know, sisters have all sorts of sides to them. It might have seemed like a betrayal, but at the same time, there was so much behind it that Alex is really just genuinely trying to protect her sister. She’s really genuinely trying to take care of her. We ended up saying that quite a bit, because it’s important for her to understand that, “I did this because I love you and I did this because I’m trying to keep a watchful eye over you and make sure that I’m in some way [protecting you].”

AX: Alex also has kind of a complicated relationship with her DEO boss, Hank Henshaw, who she and we have recently found out is actually the last remaining green Martian, J’onn J’onzz …

LEIGH: We’re actually discovering a lot of that right now, because we’re opening up the story of why Alex has been recruited to the DEO and what that really looks like. I’m honestly learning it all as we go, right now. But yeah, he’s definitely been a very big mentor for her and a big reason why she’s doing what she does, as far as the alien-fighting and all that is because of his passion for it, so she learns a lot from him.

AX: It seems like you probably wouldn’t let your young kids watch GREY’S ANATOMY, but do they get to watch you on SUPERGIRL?

LEIGH: Oh, my gosh. Yeah. I mean, I brought my son with me already. He’s twelve. He got to come and experience some of it, and it is a whole new experience, and a whole new set of “cool mom” points that I get to have. My daughters – I have nine- and six-year-old girls, and for them to have something like this to look up to, and a character like Kara, that is just as extraordinary as Supergirl. I’m so grateful to be a part of something like this, because there are not too many things that you can share with your kids like this, and it’s so positive and so uplifting, and my girls really get a chance to see, between my character and the Kara character and Supergirl, there are so many things to relate to and it’s so exciting. It is fun. There are a lot of kids that get to come [to set].

AX: They can’t be Supergirls, plural?

LEIGH: Yes, they can. That was the conversation afterwards. “It’s not a competition, everybody gets to be a Supergirl.”

AX: How does your son respond to the show?

LEIGH: He is ecstatic. He’s a big comic kid, and so for this to come up – he really has enjoyed it and I’ve had an opportunity to be able to go to this place called Gentle Giant, which is amazing, and they’ve done a lot of 3D printing stuff, they do all the different characters, and I took him with me to that, and I’m literally the coolest mom on the planet. So he gets to see a lot of the behind the scenes and how they do the CGI and how they create your character to become a digital version of you on the computer and on the screen. And he’s just fascinated, he loved it.

AX: Does your son have a favorite character?

LEIGH: Oh, that’s a good question. He could probably rattle off a thousand. I don’t know that he has one in particular – he’s a big Batman kid, as am I.

AX: Is Batman your favorite superhero?

LEIGH: Yes. I think he’s pretty cool. The original. The Michael Keaton version of BATMAN I think is by far still the best.

AX: What would you most like people to know about SUPERGIRL?

LEIGH: That anybody can be a Supergirl.