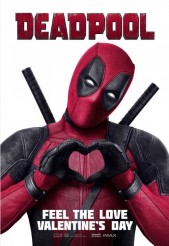 Reliably funny and entertaining from the opening credits onward 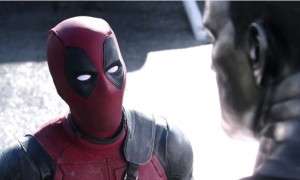 There aren’t many movies that can (or even try to) make us laugh, hard, at the opening credits. DEADPOOL does that, and thereafter reliably supplies humor, romance, hardcore violence, a wee bit of horror (depending on your definition), Marvel Comics mythology and assaults on the fourth wall that magically don’t compromise the rest of what’s happening. Director Tim Miller and writers Rhett Reese and Paul Wernick, working from the Marvel Comics characters created by Rob Liefeld & Fabian Nicieza, have created a comic book-derived movie that’s pure enjoyment, at least, for those who can get behind some very bloody events.

We meet Deadpool, aka Wade Wilson (Ryan Reynolds), mid-cab ride as he simultaneously chats to us and his driver (Karan Soni).  Deadpool is wearing a bright red costume that covers everything, even his eyes (though the mask has white areas concealing these). He tells us straight off the bat that he’s looking for someone he dislikes, a lot, named Francis (Ed Skrein). After a whole lot of bashing, Deadpool takes us back in time to why he’s so mad at Francis and why he’s in that super – please don’t call him a hero – outfit.

Wade Wilson starts out as your more or less normal ex-Army mercenary, with a soft spot for good-guy clients. His claims to fame are excellent aim with a gun and a mouth that never stops quipping. And right here, let’s give it up to the real heroes of this show, writers Reese and Wernick, who make sure every one of those lines is worth Reynolds’ perfect delivery, and Miller, whose staging and pacing are impeccable for story purposes, for laughs, for gross-outs and for comic book roots.

Wade meets his match in Vanessa (Morena Baccarin), a perfect sparring partner in word-to-word combat, to say nothing of in the bedroom. They fall head over heels in love. And then …

For those not following what’s happening with Marvel Comics-derived movies, Marvel is now part of Disney, but 20th Century Fox still owns the rights to the X-MEN movies, which is why we don’t see any of that team showing up with the Avengers, or vice-versa. While DEADPOOL doesn’t address this directly, it does at least mention someone connected with the AVENGERS-verse, but then, there’s a larger amount of real-world movie name-dropping than we might expect. Other movies do this, but it’s rare in one that goes for real emotion and suspense, despite its protagonist’s resolute tongue-in-cheek manner.

But it is exactly that attitude that bonds us to what’s going on. DEADPOOL the movie tells us we’re in on all of it with the character. It wants to surprise us, certainly, but it never wants to fool us or make fools of us. So if, for instance, part of our brains are wondering why we’re seeing so few X-Men, Deadpool will wonder this right along with us, and then provide the answer we’re all thinking. It earns our trust, and then invests it wisely, so that when it wants to make us care, it does.

Speaking of the X-Men we do see, Brianna Hildebrand is aces, and Stefan Kapicic gives us convincing sincerity in a context that makes this achievement extra-special.

Reynolds fits into the Wilson role – which he originated in 2009’s X-MEN ORIGINS: WOLVERINE, but hasn’t reprised until now – as though it were tailored to his every ability. Baccarin is charming as Vanessa, Skrein is suitably smart and sadistic as the bad guy and T.J. Miller (of SILICON VALLEY) and Leslie Uggams both score as Wade’s pals.

There’s no point in getting all spoilery, though, yes, there is a post-credits sequence worth watching. What you need to know about DEADPOOL mainly is that, first, when bad imitations of its form come, and they will, they will be especially painful. Second, if this is the sort of thing you generally like, this is a movie you will specifically love, and probably want to see again, right away.