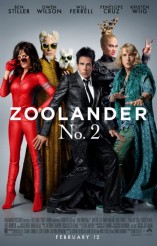 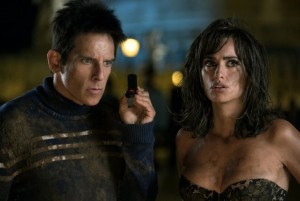 Ben Stiller’s epically airheaded supermodel character Derek Zoolander, created by the actor and his then-writing partner, the late Drake Sather, began life in the ‘90s in sketches created for the VH1 Fashion Awards. In 2001, ZOOLANDER got his own movie, with the character jockeying for position with fellow male supermodel Hansel, played by Owen Wilson, and being brainwashed by evil fashion designer Mogatu (Will Ferrell). Directed by Stiller and co-written by Stiller, Sather and John Hamburg, ZOOLANDER 1 had a lot of inspired silliness to recommend it.

With a lot of the old gang on hand, including Stiller back as star, co-writer and director – Hamburg is also back as a writer, along with new scribes Justin Theroux and Nicholas Stoller – and enough time in between to come up with new inspiration, ZOOLANDER 2 sounded promising. There are some chuckles to be had here and there, often thanks to some surprising guest stars. However, the overall result is like one of those SATURDAY NIGHT LIVE sketches that throws in a bunch of jokes related to the topic but that fall short of the mark.

In ZOOLANDER 2, although Derek overcame being brainwashed, prevented an international disaster and wound up being a lauded hero, tragedy struck shortly thereafter.  Fifteen years later, Derek is an isolated hermit. However, when it’s pointed out to him that he can take steps to regain custody of his long-unseen son Derek Jr. (played as a teen by Cyrus Arnold), he’s willing to brave a catwalk in Rome.

Hansel, meanwhile, has a full if unconventional household, but when fatherhood looms, he seeks an escape – and winds up heading for the same Roman fashion show.

Meanwhile, someone is assassinating all of the world’s pop stars. What does this have to do with Derek and Hansel? That turns out to be a much better question than it should be, because the plot is incredibly convoluted. There is an explanation, but it’s almost beside the point.

In a successful comedy, filmmakers can get away with a lot when the jokes land. The problem is that here the chuckles are intermittent, and actual laughter is in short supply. There’s way too much time to reflect on how long certain gags are being stretched, and how one can see how some jokes are supposed to work and why they don’t, and how the story is not fun either straight or as parody.

It seems like the writers figured that while they were sending up high fashion, celebrity and the beauty-obsessed culture, they might as well take on the mythic quest/fantasy genres as well. Part of the problem is that, as evidenced here, the writers have contempt for this last category and don’t have a cohesive comedic take on it. This in turn creates dead make-work plodding plot points where entertainment should be.

There’s a good opening gag involving one pop star du jour. Thereafter, the jokes are hit or miss. Even the ones that land tend to be repeated without enough variation to keep them landing.

As an actor, Stiller displays commitment to Derek, who is a unique character and funny in even medium-sized doses – indeed, he held up throughout the entirety of the first ZOOLANDER, so perhaps it’s the context that lets him down. As before, Wilson gives Hansel and amiable, sunny persona that tends to overshadow his intellectual shortcomings. Ferrell once more endows Mogatu with petulant evil. Penelope Cruz is a good sport as an Interpol cop, Arnold gives a sincere turn as Derek Jr., and an enormous number of celebrities, including star fashion designers playing themselves, show up in cameos with varying impacts. The closest the movie comes to a standout performance is Kristen Wiig as a fashion maven who imperiously insists on pronouncing every single word as she sees fit. The gag is one of the film’s better ones, and Wiig attacks it with appealing gusto.

ZOOLANDER 2 manages to maintain its tone throughout, and it is consistently silly. It is also sometimes funny, though not nearly enough to warrant how long it feels.