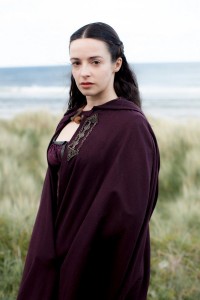 What work of fiction is between 1,000 and 1,300 years old and is just coming to television now? That would be the epic Anglo-Saxon poem BEOWULF, premiering as the thirteen-part BEOWULF: RETURN TO THE SHIELDLANDS Saturday, January 23, as Esquire Network’s second scripted series.

For those unfamiliar with the myth or the multiple motion pictures, Beowulf is a Scandinavian hero who comes to Hrothgar’s Hall (i.e., castle) to save the citizens from a marauding monster called Grendel. In BEOWULF, Beowulf (Kieran Bew) spent much of his childhood in Heorot Hall as the ward of its ruler, Thane Hrothgar (William Hurt), but left under mysterious circumstances. He comes back to see his dying foster father to find Hrothgar’s wife Rheda (Joanna Whalley) in charge and Hrothgar and Rheda’s son Slean (Ed Speleers) still bitter at Beowulf over what happened between them as youngsters. There are other tribes to contend with, and Grendel isn’t the only monster out there.

BEOWULF, one of the series’ executive producers and originators, sits down for a talk about her historical action/adventure.

AX: Did you create the project, or was it brought to you?

KATIE NEWMAN: I created it with my colleague, [fellow executive producer] Tim Haines. We were looking at the next show to do and we were just thinking “brand,” and then we came across Beowulf and it had never been done for television. And it’s an amazing story. It explores what it means to be a man, what it means to be good, what it means to be a hero, and I think in a world which is complicated and violent that we live in, it reflects upon it. So it felt very relevant today.

AX: Were you familiar with any of the film versions?

NEWMAN: I did watch many Beowulf films at the beginning when we were looking into it. I think, though, many of the films are quite faithful to the poem, faithful to the story of Beowulf coming back and hunting Grendel and tracking him down. But when we were developing it for a TV show, I like to say it was inspired by the poem, rather than follows that, because that wouldn’t be a good promoter for a television series. And actually, the epiphany I had that I think unlocked it was thinking about the Western.

So we started with the poem, but essentially the story came – we have a precinct, which is Heorot’s [Hall], and Beowulf comes back and becomes the sheriff, and the story is about him protecting Heorot from hostile forces from within and without. In terms of the poem, we’ve kept the soul, I like to say. I think thematically the story is of man versus beast, and the struggle of being a hero, and living up to expectations. Everything else, I would say about ninety percent, is fictional – the world, the tribes, the characters.

AX: You obviously need Beowulf, you probably need Hrothgar –how did you decide on who the other characters would be and what you needed them to do?

NEWMAN: Well, yeah. We started with Beowulf. It’s about family. The story is family and protection, and ultimately, what Beowulf learns is, the only thing worth fighting for is family. So we started with who he considers to be family, not necessarily by blood. And we went from there. There are a few characters in the poem that we’ve again been inspired by, which aren’t exactly faithful to the poem, but they’re in there in spirit, in a different way. So for example, there’s a lovely character in the poem called Umfurth. He’s a young warrior who ends up standing by Beowulf, and that kind of inspired a character called Vishka [played by Ellora Torchia], who’s a young girl blacksmith, and she desperately wants to be a warrior. We wanted our female characters to have a genuine arc, to be real, to have three dimensions, so we actually made the choice to have a female thane, so in Episode One, Hrothgar dies and he gives [the position of thane] to his wife instead of his son.

AX: It appears that there’s a possibly deadly sibling rivalry between Beowulf and the legitimate son Slean?

NEWMAN: Yes. Slean is a wonderful character, and I think in Episode One, people see him as kind of black-and-white bad, but he goes on a wonderful journey and epitomizes one of the central themes, which is no one’s really inherently all good and no one’s inherently all bad. Often all of us are struggling to be something in the middle, and he’s one of those characters. So yeah, the rivalry between those two – it’s complicated. It’s not just about the fact that Hrothgar preferred Beowulf – you kind of get a strong sense of that – the woman [Slean] loves falls for Beowulf, so it’s a real love triangle. So those two grapple, have an interesting conflict.

AX: You also have quite a variety of hostile creatures …

NEWMAN: Our collective creatures are called Mudborn. We have a brilliant VFX house called Milk developing them, and we have barghests, trolls, skin-shifters who take on human form but are actually different creatures, giants come into it, we explore some in Season 1, and we’ve some coming up in later seasons, if we’re so lucky.

AX: What are the horned creatures that run around on all fours, but can climb?

NEWMAN: They’re trolls. Tim Haines’ background is actually in zoology and as a scientist, and we worked together for about nine years on a show called PRIMEVAL, which was about creatures from the past and the future coming through [to the present], and it’s the same [effects] company we’re using mostly, who did those. When we design creatures, and this really comes from Tim’s background, you start with truth. So we’ll look at real-life creatures, see how they move, see how they interact socially, and I think often our creatures have a sense of authenticity because of that. In terms of the troll, though, it’s a fictional creature, but we looked at gorillas and we looked at a variety of things.

AX: And are you looking at the other shows set in relatively the same era, like VIKINGS and THE LAST KINGDOM so you can figure, “Well, they’ll do that, so we will do something different,” or are you just ignoring them?

NEWMAN: I absolutely love both shows, but what we’re doing is making the first-ever television series of BEOWULF, which was the first epic hero, and I think the hero that defined them all from the very beginning, so all those shows exist, and I think what’s wonderful is, if people didn’t want to watch them, we wouldn’t keep making them. And it’s chimed and I think we need hero stories. So I’m glad all those shows exist, but ours is BEOWULF. A big difference obviously between VIKINGS and LOST KINGDOM is, ours in fantasy, with trolls and skin-shifters. And the liberty that gives us is fantastic. So that’s kind of a huge difference.

AX: How did you choose your writing series developer/show runner James Dormer?

NEWMAN: Tim and I talked about the project, and then I wrote a couple of pages about what the show would be, and then we approached James. We wanted someone who could do visceral writing, who could write action, who could explore kind of male themes, if you like, and he’d just done a show called STRIKE BACK. But one thing that’s slightly different in the U.K., it’s not the show runner – Tim, James and I come up with all the storylines. It’s more collective than in the U.S., where you have a central show runner set up.

AX: How did you find your leading man, Kieran Bew?

NEWMAN: Well, when we were looking for Beowulf, I thought it was going to be really hard, because he needs to fill everything, but when Kieran read, when you see him on tape for the first time, he just had something. The other thing that’s quite remarkable about Kieran – he’s a champion sword-fighter, fencer, in Britain, one of Britain’s top back in the day, so getting a hero who could not only fulfill the role of the character but also could do his own sword-work was fantastic. So there’s an authenticity with the fighting.

AX: How did Joanne Whalley and William Hurt become involved?

NEWMAN: Joanne read the script and loved it. I think for her, in terms of female characters for fifty-year-old women, there’s just not a lot of great characters, and this was just a fantastic character. I think she just likes Rheda and where Rheda goes, so she just [was enthusiastic]. William Hurt was really just luck. You have your list of people, and we approached him. Just per chance, he loves BEOWULF. He’s a huge BEOWULF fan. And then James met him and they talked about what it means. So it just was the right project at the right time that interested him.

AX: And where do you shoot?

NEWMAN: We shoot in Northumberland [in northern England]. It was intense and we shot on this fantastic quarry, but high on the moorlands, so you’d get in an hour every different sort of [weather] – ninety-mile-per-hour wind, rain, sleet, hail. But one thing is, the weather does become a character, because you can’t fake that. So when you see the hair blowing, it does feel frontier [laughs]. It’s meant to be a frontier place and I think it very much comes across on screen.

AX: Do you have any real castles that you’re incorporating in the Northumberland area?

NEWMAN: We’ll use a bit of stone work and then CGI the rest of it, because it’s just not the right era. But we’ll use stone and, actually, in our world, the ruins are those of the giants. So giants did exist before humans came to the Shieldlands, so anything you’ll see, it will be changed to reflect giant architecture.

AX: How is Esquire to deal with in terms of notes and also broadcast standards, what you can and can’t do on the network?

NEWMAN: I think because they came on quite late and we’d already developed the whole series, very light on this season. If we go forward, it would be lovely to work more with them, but when they came on board, we’d already kind of established the world. The episodes were almost all written, I think, at that stage.

AX: In Nordic lore, there is a tradition of women warriors, the shield maidens. Are you going to get into that at all?

NEWMAN: Well, for me personally, as a woman in this industry, I think I don’t want to work on a show where there aren’t great representations of women. And in the hero genre, I get bored of watching shows where men get all the fighting and the women stand in miniskirts and just look pretty. So I think, from the beginning, we always wanted to [have women involved in the] fighting. We did talk – whether or not we’ll have a whole tribe of shield maidens at some point, I’m not sure, it’s not currently in the plan, but I think it’s important that women are represented.

AX: And what would you most like people to know about BEOWULF: RETURN TO THE SHIELDLANDS?

NEWMAN: It’s a gripping action/adventure tale with heart and soul, romance, that will take people on a journey.

This interview was conducted during Esquire Network’s portion of the January 2016 Television Critics Association press tour.

Related: Exclusive interview with Kieran Bew on playing the legendary hero in BEOWULF