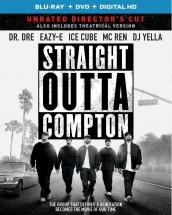 Reviewed this week: STRAIGHT OUTTA COMPTON, THE INTERN, THE DIARY OF A TEENAGE GIRL and more

Business is picking up in the video realm with some good stuff out this week and things will continue to get better in the coming weeks as studios get over the holiday hangover of virtually nothing coming out. 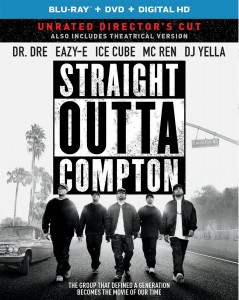 STRAIGHT OUTTA COMPTON – We have seen a number of docudramas come out regarding the rise to fame of some of the most famous rock groups out there but the back stories of the rap world (except for maybe Eminem) have gone without any documentation. But now we get the behind-the-scenes look at one of the most famous rap groups of all time N.W.A. that led to many of the stars becoming famous actors and solo musicians. The cool thing about this movie is that it shows just how outside of the norm the group really was and how radical what they sang about and how they went about things were. It is truly revolutionary and something we may never see again in today’s age given how much things have changed in terms of social media and the like. It also shows how far race relations were stagnate back then as well with cops and others trying to hold the group down. So it is an eye opener and really paved the way for many of the artists that are popular today. The cool thing about the Blu-ray and DVD is that it has some really cool stuff on it beyond the movie such as never before seen performances from the group, featurettes with the original members, featurettes on the impact of the group and a whole lot more that adds depth to the movie. 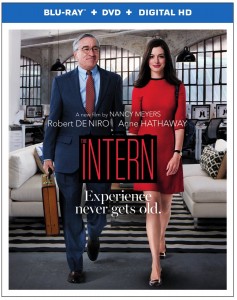 THE INTERN – THE INTERN is an interesting movie has it isn’t probably what most people expect from a film about a older guy going back into the work force and having to be teamed with a woman at least half his age. Usually these type of movies involve the old guy teaching the younger girl new tricks and her thriving in the work environment. But thankfully it doesn’t go that way. Instead it is a good story about friendship between two people just trying to do their part and do it effectively in the fast-paced business world. Robert De Niro and Anne Hathaway star in a movie that keeps the laughs coming but has a very serious side as well. And unlike most films where there is an evil boss or some bumbling idiot making decisions, there isn’t really a villain here. Again it is more about everyone trying to do their part. In some ways, that might be boring but lucky both De Niro and Hathaway are good in their roles and the comedic elements keep it going when there may be a moment of boredom. Definitely worth checking out if you enjoy good hearted movies with a smart, funny script and good acting. 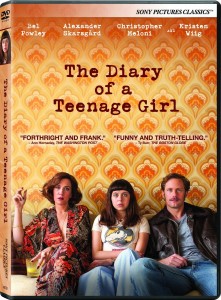 THE DIARY OF A TEENAGE GIRL | © 2016 Sony Pictures Home Entertainment

THE DIARY OF A TEENAGE GIRL – This is an interesting movie as it goes against everything you know about romances and how people should act in today’s age. But being that THE DIARY OF A TEENAGE GIRL I guess (I guess!?) it is more acceptable to have a story about a 15 year old girl that develops a romance with a much older man in his 30s. What’s worse is that her lover (played by Alexander Skarsgard) is the boyfriend of her mother. Yeah, not your conventional romance drama. Luckily, the film doesn’t dwell too much on such a taboo subject and makes light of it at various times. The movie is based on the book of the same name and doesn’t do much to conceal any of the language or sex that’s involved here and I guess you could say it is a coming of age story but it sure is an odd one at that especially given the nature of what’s happening. Still, knowing the girl is so young, it does make for some difficult watching at times so be warned. The video contains some deleted scenes, audio commentary, featurettes with the cast and other items from the festival circuit. 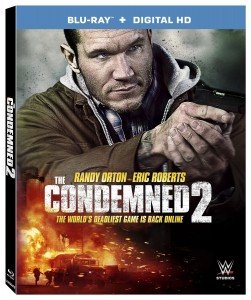 THE CONDEMNED 2 – The original THE CONDEMNED was a surprisingly fun action flick that took some of the best of BATTLE ROYALE and matched it with the ongoing thirst for more crazy content on the Internet as well as the quest for page hits and views. It also had Stone Cold Steve Austin in the lead role and he’s just an interesting guy in general and has the look of an action star that it fit well with the flick. Part 2 doesn’t involved Austin but instead another WWE superstar in Randy Orton that plays a bounty hunter/mercenary type that gets hunted by a power hungry sinister bad guy type that is running a similar game where he has wealthy people betting on the life and deaths of random people. Here, the guy threatens Orton’s former mercenary partners into trying to kill him so he must kill his friends in order to stop the bad guy. I wanted to like this as much as the original but it loses a lot of what the original had in terms of getting a group together and having them kill each other BATTLE ROYALE style instead they are just trying to kill one man. So we get a lot of Michael Bay-type needless explosions and lots of random dudes getting gunned down. Still as far as action flicks go, you could do a hell of a lot worse.